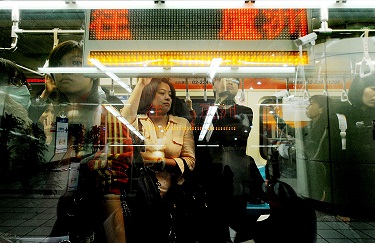 Public reaction to the Taipei Mass Rapid Transit (MRT) system's new Luzhou Line appeared to be mostly positive yesterday despite concerns about the depth of some underground stations.

Just before 2 p.m., excited passengers waiting outside Xingtian Temple Station counted down to the moment when operation of the new line was set to begin.

"When are they going to open the gate for us, Mommy? " asked 7-year-old Huang Tzu-ying, who took the first train bound for Luzhou accompanied by her mother and aunt.

With the launch of the new service, the little girl would be able to sleep for an extra half hour, said her mother, Wang Mei-chen.

The trip from Sanchong Elementary School Station to Songjiang Nanjing Station, where Tzu-ying goes to school, took just 11 minutes, compared with the usual 40 minutes by bus during rush hour, she explained.

The new line, 12.5 kilometers in length, makes it easier for citizens of Taipei City and their neighbors in Taipei County to visit each other.

Chen Gen-wang, an 82-year-old resident of Taipei City, boarded a train on the city side of the Danshui River, which forms part of the border between Taipei City and the county.

He was taking advantage of the free ride, which would last for a month starting yesterday, to visit Taipei County's Luzhou township, which he had never been to.

Not everyone who tried the free service was entirely satisfied, however.

Many passengers queuing for information about ticketing and transfers were confused. Some complained that the free ride should be available to everybody, not just to holders of EasyCards, a commonly used electronic ticket which looks like a credit card.

Others said that the new stations were much larger and further underground than they had expected.

"There are not many escalators, as you can see, " 25-year-old Vivian Hsu told a CNA reporter. "Even during rush hour, I wonder how many people will use the hill-like stairways."

There are 11 stations along Luzhou Line, all of which lie up to 30 meters underground. At Xingtian Temple Station, the flights of stairs that take passengers to ground level consist of atotal of 133 steps.

The opening of the new service was also marked by a demonstration by people who protest the construction of another line.

Members of protest group "Happy Losheng" demonstrated outside Daqiaotou Station, from which a new line being built will run to Xinzhuang in Taipei County. Construction plan for a train depot at the end of the Xinzhuang line has sparked controversy and debate because of its impact on a former hospital for lepers nearby.