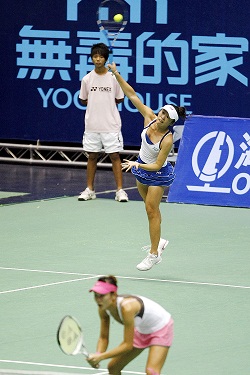 The 19-year-old will next face world No. 43 Groth. The Australian is the tournament's top-ranked player and beat Beygelzimer 6-4, 6-4 yesterday in the second round. Groth won the tournament in its first year in 2008.

In the doubles competition, the Groth/Tanasugarn combo and the Chinese pair Peng Shuai/Yan Zi both secured quarterfinal berths Monday by winning in the first round.

The total purse for the International Tennis Federation (ITF) event is US$100,000, according to the Chinese Taipei Tennis Association, which is organizing the tournament.

ITF tournaments are a tier below WTA events, which have minimum purses of US$220,000 and attract higher ranked players.

Defending singles champion Chan Yung-jan, who was Taiwan's highest-ranked player at world No. 81, withdrew from the tournament last week due to pneumonia.