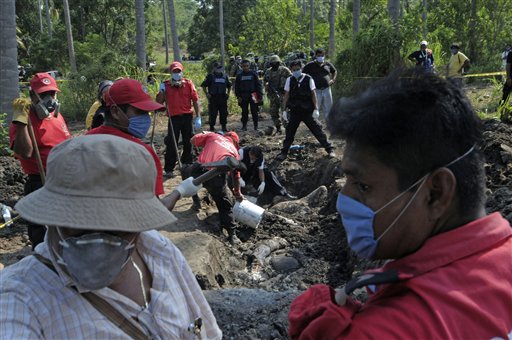 In another grisly turn in Mexico's drug war, police have recovered 18 bodies from a mass grave announced in a YouTube posting — a video saying the victims were from a tourist group kidnapped in Acapulco a month ago.

Authorities said they would resume their search today for more remains at the burial site in Tres Palos, a town just south of the Pacific resort city.

Police did not yet know if the bodies found were from the 20 men abducted at gunpoint Sept. 30 while visiting Acapulco from neighboring Michoacan state, Fernando Monreal, investigative police chief for Guerrero state, said Wednesday night.

Officers began digging at the site early Wednesday after receiving an anonymous phone call alerting them to two bodies dumped on an empty lot.

Hours earlier, a video appeared on Youtube in which two men — their hands apparently tied behind their backs and answering questions from an unseen interrogator — say they killed "the Michoacanos" and buried them in the area.

The two bodies reported in the tip were found wearing the same clothes as the pair seen in the video and were lying on top of the mass the grave.

A sign left between the two men read: "The people they killed are buried here." It was signed by Acapulco's Independent Cartel, or CIDA — a little known drug gang that has been claiming responsibility for killings in the area over the last two months.

Monreal said authorities had not confirmed the identities of the bodies dumped on top of the grave.

In the video, the two men say they killed the "Michoacanos" in an act of revenge against La Familia, a powerful drug cartel based in Michoacan state.

The families of the 20 missing men, many of them related to each other, have said they were mechanics in the state capital of Morelia who each year saved up money to take a vacation together. Among those abducted was the 17-year-old son of one of the mechanics.

Guerrero state investigators say they corroborated that the men worked as mechanics and had no criminal records. Investigators also say they could find no evidence linking the men to any gang and have speculated the group may have been targeted by mistake.

Hundreds of the men's relatives and friends have twice marched in Morelia to demand federal authorities investigate the case.

On Sunday, about 1,000 people marched to urge authorities to keep searching for their loved ones.

"To the people who have them, we ask them to have mercy on them, on us," Katy Rodriguez, a niece of seven of the missing men, said in a message sent to the captors through the media.

The kidnapping was one of the biggest blows yet to Acapulco, which has seen an increase in drug-gang shootouts, beheadings and kidnappings. Even Acapulco Mayor Jose Luis Avila Sanchez recently urged residents to stay indoors after nightfall, an extraordinary pronouncement in a city where the economy is built on nightclubs, bars and restaurants.

Mass killings have become more frequent amid raging, drug-fueled violence in Mexico. In the most horrifying attack, 72 migrants were massacred in northern Mexico near the border city of Matamoros in August, apparently because they refused to work for the Zetas drug gang.

Videos like the new posting on YouTube have become a new dimension of terror to Mexico's bloody drug war. Cartels are increasingly releasing video of kidnapped people admitting at gunpoint to crimes ranging from extortion to murder. It is often impossible to determine the veracity of confessions given under duress.

In the boldest case, a video emerged less than two weeks ago showing the kidnapped brother of Patricia Gonzalez, the former attorney general of northern Chihuahua state. In the video, the brother, Mario Gonzalez, says his sister protected a street gang tied to the Juarez cartel and was behind several murders.

Gonzalez, who had been kidnapped days earlier, made the statement while sitting handcuffed in a chair surrounded by five masked men pointing guns at him. His whereabouts remain unknown.

Patricia Gonzalez denied any links to drug traffickers and said she is sure her brother spoke out of fear.

Another video made by drug traffickers and released in July led to the arrest of a prison warden who allegedly allowed inmates allied with the Sinaloa cartel to temporarily leave the Gomez Palacio prison to murder rivals. The warden allegedly even lent the inmates guns and vehicles to carry out the killings.

The Zetas drug gang, a rival of the Sinaloa cartel, first drew attention to the prison scandal by kidnapping a local police officer and forcing him to describe the scheme on a video released on the Internet.