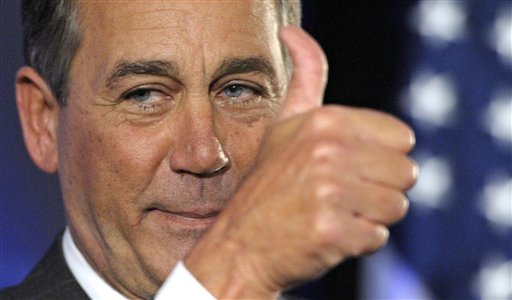 Seizing control of the House and gaining strength in the Senate, triumphant Republicans ushered in a new era of divided government today and served notice they will confront President Barack Obama with a conservative agenda to cut government and spur private-sector jobs.

"We've been given a second chance and a golden opportunity," Rep. Eric Cantor of Virginia, No. 2 Republican in the House, said as his party reaped a windfall from independent voters and tea party activists. He called the outcome a rejection of Obama more than an endorsement of the GOP, cautioning fellow Republicans they must to work to win public confidence.

"People want to see results," he said on CBS's "The Early Show." ''They want to see the government go on a diet just like they have."

Republicans scored the biggest party turnover in more than 70 years Tuesday with their win in the House and, in doing so, will dethrone Democratic Rep. Nancy Pelosi — a prime target of their campaign — who had crashed a political glass ceiling and made history with her elevation to speaker four years ago.

"If we need to work something out with the people who are really rich, I'll have to look at that," he told CNN's "American Morning." ''If there's some tweaking we need to do with the health care bill, I'm ready for some tweaking. But I'm not going to in any way denigrate the great work we did as a country, and saving America from bankruptcy because of the insurance industry bankrupting us."

Republican Rand Paul, who won a Kentucky Senate seat in a race powered by tea party support, said Americans need not fear gridlock in the next Congress because "debate is healthy."

"It seems like the most fiscally conservative government is always divided government," Paul said on NBC's "Today" show.

Earlier, Obama called Ohio Rep. John Boehner, the House speaker-in-waiting, to congratulate him. He also spoke with Senate Republican leader Mitch McConnell and top Democrats in a series of conversations that reflected the shifting balance of power.

The Republican leaders penciled in a late-morning news conference, to be followed a short while later by Obama's own meeting with reporters at the White House.

Incomplete returns showed the GOP picked up at least 60 House seats and led for four more, far in excess of what was needed for a majority. About two dozen races remained too close to call.

On their night of triumph, Republicans also gained at least six Senate seats, and tea party favorites Paul in Kentucky, Mike Lee in Utah and Marco Rubio in Florida were among their winners.

Not all the tea party insurgents won. Christine O'Donnell lost badly in Delaware, for a seat that Republican strategists once calculated would be theirs with ease. And in Nevada, Reid dispatched Angle in an especially costly and contentious campaign in a year filled with them.

His win left three races still unresolved — in Colorado, Washington and Alaska, where Sen. Lisa Murkowski ran as a write-in candidate after losing the Republican nomination earlier this fall.

The GOP also wrested 10 governorships from the Democrats, Ohio and Pennsylvania among them, and gave two back, California and Hawaii.

In New York, Andrew Cuomo won the office his father, Mario, held for three terms. And in California, Jerry Brown was successful in his bid for a comeback to the governor's office he occupied for two terms more than a quarter-century ago.

The biggest win by far was the House, a victory made all the more remarkable given the drubbing Republicans absorbed at the hands of Democrats in the past two elections. Their comeback was aided by independents, who backed GOP candidates for the first time since 2004, by a margin of 55 percent to 39 percent. Women backed Democrats 49-48, after favoring them by a dozen points in recent elections.

The takeaways came in bunches — five Democratic-held seats each in Pennsylvania and Ohio and three in Florida and Virginia. Incumbents sent to defeat included three committee chairmen, Ike Skelton in Missouri, James Oberstar in Minnesota and John Spratt in South Carolina, as well as Paul Kanjorski of Pennsylvania, in Congress more than a quarter-century.

Democrats conceded nothing while they still had a chance. "Let's go out there and continue to fight," Pelosi exhorted supporters in remarks before television cameras while the polls were still open in much of the country.

But not long after she spoke, Democratic incumbents in both houses began falling, and her own four-year tenure as the first female speaker in history was doomed. She gave no indication of her own plans.

"We must all strive to find common ground to support the middle class, create jobs, reduce the deficit and move our nation forward," she said in a statement.

Efforts to revitalize the economy top the list, and Republicans also campaigned calling for spending cuts to reduce deficits, extension of expiring tax cuts for all and repeal of Obama's cherished health care bill — all areas ripe for confrontation in the months ahead.

With unemployment at 9.6 percent nationally, interviews with voters revealed an extraordinarily sour electorate, stressed financially and poorly disposed toward the president, the political parties and the federal government.

About four in 10 voters said they were worse off financially than two years ago, according to exit polls and pre-election surveys. More than one in three said their votes were an expression of opposition to Obama. More than half expressed negative views about both political parties. Roughly 40 percent of voters considered themselves supporters of the conservative tea party movement. Less than half said they wanted the government to do more to solve problems.

Republicans were certain of at least six Senate pickups, including the seat in Illinois that Obama resigned to become president. Rep. Mark Kirk won there, defeating Alexi Giannoulias.

Democratic Sens. Russell Feingold in Wisconsin and Blanche Lincoln in Arkansas were turned out of office. In addition, Republicans scored big in races for Democratic seats without incumbents on the ballot. Former Rep. Pat Toomey won a close race in Pennsylvania, North Dakota Gov. John Hoeven won easily there, and former Sen. Dan Coats breezed in a comeback attempt for the Indiana seat he voluntarily gave up a dozen years ago.

The GOP gubernatorial gains came after a campaign in which their party organization spent more than $100 million, nearly double what Democrats had.

Among the incumbents who fell were Ted Strickland in Ohio, defeated by former Rep. John Kasich, and Chet Culver in Iowa, loser to former Gov. Terry Branstad.

In a footnote to the brutal politics of the campaign, Republican-turned- independent Lincoln Chafee was elected governor of Rhode Island. Obama campaigned in the state in the campaign's final week. But he declined to endorse the Democratic candidate, Frank Caprio, out of what the White House said was respect for Chafee, who had endorsed the president in his own presidential race two years ago.

A Republican takeover of the House ushers in a new era of divided government after two years in which Obama and fellow Democrats pushed through an economic stimulus bill, a landmark health care measure and legislation to rein in Wall Street after the near collapse of the economy in 2008.

Paul's triumph in Kentucky completed an improbable rise for an eye surgeon making his first race. He drew opposition from the Republican Party establishment when he first launched his bid, then struggled to adjust to a statewide race with Attorney General Jack Conway.

Rubio, also running with tea party support, won with 49 percent of the vote in a three-way race in Florida, months after he forced Gov. Charlie Crist to leave the Republican Party and run as an independent. Democratic Rep. Kendrick Meek ran third.

But a third tea party-backed candidate, O'Donnell, who went from a virtual unknown to primary winner to fodder for late-night comedians in the span of a few months, lost overwhelmingly to Democrat Chris Coons in Delaware. Republicans had counted on taking the seat from the Democrats early this year, but that was before O'Donnell defeated veteran Rep. Mike Castle in a September primary. Democrat John Carney easily won the seat that was Castle's for nearly two decades.

Not all the Republican newcomers were party crashers.

Democratic Sen. Patrick Leahy of Vermont was re-elected to his seventh term and Barbara Mikulski her fifth. New York Sens. Charles Schumer and Kirsten Gillibrand also won, as did Sen. Ron Wyden in Oregon and Boxer in California In Hawaii, Democratic Sen. Daniel Inouye was elected for a ninth time to the seat he has held since 1962.

Republican Sen. Jim DeMint, who won a second term in South Carolina, has been working to establish a nationwide standing among conservatives. He was instrumental in supporting tea party challengers in several primaries this spring and summer at a time the GOP establishment was backing other candidates.