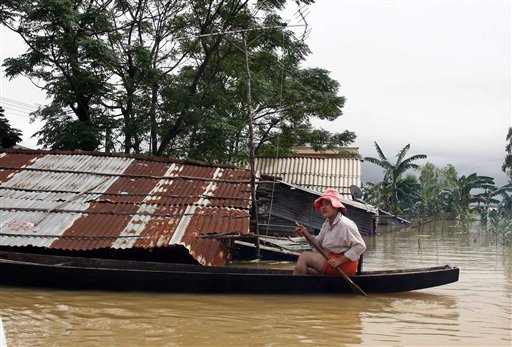 A third round of flooding in central Vietnam has killed eight people and left six missing, the government said today.

Rains up to 97cm (38 inches) have pounded the region over the past week, forcing the evacuation of more than 34,000 people, the national floods and storms control committee said.

Meanwhile, villagers recovered the bodies of two people who were among passengers of the bus that was swept away by surging currents two weeks ago.

The bus was traveling from the central province of Dak Nong to the northern province of Nam Dinh on Oct. 18 when it was caught in surging currents after the driver ignored police warnings to stay away from the country's flooded main highway.

So far, the bodies of 17 passengers have been recovered, three others remain missing.

Central Vietnam was hit by two earlier rounds of severe flooding, which killed 143 people, including the two bodies recovered from the bus.