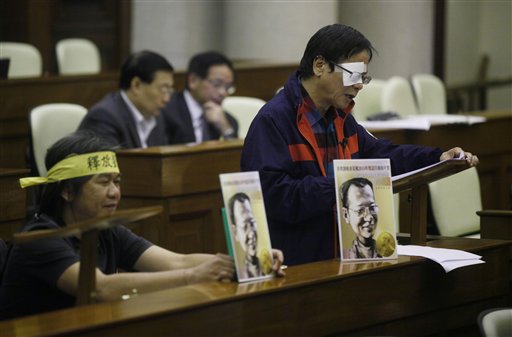 Liu's Nobel win last month drew an angry response from the Chinese government, which blasted Nobel organizers for honoring Liu, who is serving an 11-year sentence for subversion after he co-authored a bold appeal known as Charter 08 calling for reforms to the country's communist political system.

Chinese officials put Liu's wife under house arrest, and news reports of the prize have been censored. Dozens of activists have reported being detained or harassed by police in an attempt to silence reaction.

Opposition legislators lined up to pay tribute to the Chinese dissident in a debate triggered by Raymond Wong, who proposed a resolution demanding Beijing release Liu and other jailed dissidents.

Wong said Liu's 20-year plus campaign for human rights and democratic reforms made him a "role model for political dissidents."

"The Chinese Communist Party may be able to lock up Liu Xiaobo and other human rights activists, but it cannot resist the trend of democracy," Wong said.

Wong's motion, however, was defeated, blocked by Beijing loyalists who control the Hong Kong legislature. Half the body is elected, and the other half is chosen by interest groups that typically side with the Chinese government.

"We need to respect the mainland's political system and its laws," said Lam, who was chosen by the business community to serve in the legislature.

Hong Kong, a former British colony, has maintained separate political, economic and legal systems since it returned to Chinese rule in 1997 and enjoys Western-style civil liberties typically denied in the mainland.