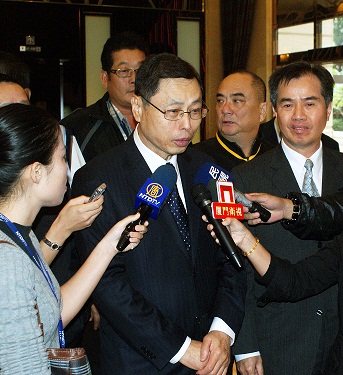 The Yilan District Prosecutors Office issued death certificates today to families of 19 Chinese tourists who are feared to have succumbed to rockslides triggered by torrential rain on the Suhua Highway 14 days ago.

All-out rescue efforts have been launched from land, air and sea since the accidents took place when Typhoon Megi pounded northeastern Taiwan with heavy precipitation on Oct. 21-22, destroying several sections of the 118-kilometer-long, cliff-edge Suhua Highway.

The Chinese tourists and their tour buses are believed to have been buried under massive mudslides or swept into the Pacific Ocean after being pushed down from the road.

Senior Prosecutor Lin Chi-hui said the certificates were issued at the request of the Chinese victims' relatives, who had rushed to Taiwan upon learning of the accidents.

Although the bodies of the 19 Chinese have not been found, they are considered to be dead on the basis of "indirect" evidence, such as inspections of the sites and testimonies of eyewitnesses, Lin said.

Meanwhile, Kao Koong-lien, vice chairman of the Straits Exchange Foundation (SEF) , a semi-official agency commissioned by the government to deal with China in the absence of formal contacts, visited the victims' relatives at a Taipei hotel earlier that same day.

Kao offered condolences to the families and said that Taiwan's government will continue the rescue operations. "No deadline has been set regarding stopping the operations as has been suggested by some lawmakers," Kao said.

"Our government will do its utmost to meet whatever requests you submit," he told the Chinese families.

The family of Lu Zeka, a member of the Guangdong group, told reporters that they understood Taiwan's relevant agencies had done a lot with regard to the rescue efforts. "We don't know what else we can ask for from Taiwan," they added.

The relatives, who have been in Taiwan for over one week, will return home on Friday after a memorial service for the Chinese victims is held at the Taipei Second Funeral Parlor on Thursday.

In related news, the insurance sector said today that families of each Chinese victim are entitled to receive NT$5.1 million (about 1.1 million Chinese yuan) in compensation.