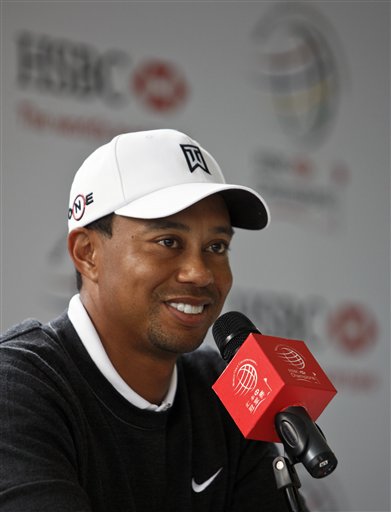 No longer No. 1 in the world, Tiger Woods said today that hasn't changed how he sees himself or what he's trying to do at the HSBC Champions.

"I come to the event to win the event," Woods said. "I haven't won an event in about a year. I've gone through periods like this before in the past. In order to become No. 1 in the world, I've won golf tournaments. It's something I haven't done, and it's a matter of going out there and competing and winning."

The HSBC Champions, which starts Thursday at Sheshan International, is the only World Golf Championship he hasn't won.

Woods will be facing a strong field, which features the new No. 1, Lee Westwood. Also playing is defending champion Phil Mickelson and PGA champion Martin Kaymer, who has won three of his last four tournaments. All four of them have a chance to go to No. 1 in the world this week, as the top of the ranking is more crowded than ever.

For Woods, a victory would be especially meaningful now.

He has won a PGA Tour event in each of his 14 seasons, and the HSBC Champions is his last chance for 2010. It would count as an official victory if won by a PGA Tour member. The tour record for consecutive seasons with at least one victory is 17, held by Jack Nicklaus and Arnold Palmer.

Woods has not come particularly close to winning all year.

He had a tie for fourth in the Masters, his first tournament since a sex scandal kept him out of golf for nearly five months, and he tied for fourth at the U.S. Open. In both majors, he took himself out of contention early in the final round. Those are the only top 10s he has this year, and Woods has not finished closer than five shots of the winner since June.

In his last competition, he was 9 under through 15 holes in his singles victory over Francesco Molinari at the Ryder Cup.

For Woods to look back to April when he returned to golf, he said there has been only one surprise.

"I never would have foreseen when I returned to the game at the Masters that I would have a new coach and I would be here," he said. "So the game is certainly much different than it was in April."

Woods began working with Sean Foley at the PGA Championship in August, and he said they worked throughout October after the Ryder Cup on trying to nail down a new technique.

While referring to Foley as his "coach," he continued to be coy about whether he was paying him.

"I'm working with him," Woods said with a smile when pressed about it later. "As far as anything formal, nothing has been announced."

Woods has played the HSBC Champions, which only became a WGC event last year, three times. He was runner-up twice, and a year ago tied for sixth. He drew the biggest crowds at Sheshan International last year, especially on the final day when he was in the same group with Mickelson and Nick Watney. Woods shot 40 on the front nine as Mickelson easily pulled away, and Mickelson held on for a one-shot victory over Ernie Els.

He returns with a different aura, mostly from the fallout of his extramarital affairs that were exposed about two weeks after the HSBC Champions.

"I look at myself as a much better person than what I was," he said. "All that I have gone through has certainly made me a better person and has enabled me and forced me to take a look at myself. Unfortunately, I had to go through it to get to this point. But I'm looking forward to working each and every day at trying to become the best parent I possibly can."

Woods and his ex-wife, Elin, divorced in August and are sharing custody of their two children.

The HSBC Champions officially began with typical fanfare, with the top four players meeting on the Shanghai riverfront to take part in the ancient Chinese martial art of taichi. It made for great pictures, with Woods and Westwood posing with swords.

They trade those in for the less ancient game of golf over the next four days, a battle for No. 1 that could stretch into next year.

"It's exciting, I'm sure, for the public," Woods said. "As far as the players are concerned, I think that everyone has the same focus, and that's to win golf tournaments."