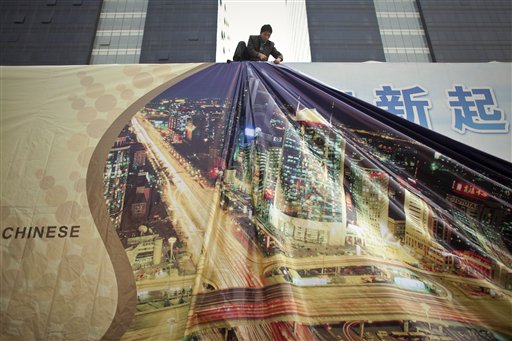 China's rapid growth is easing to a manageable pace and Beijing can do more to reconfigure its economy to promote domestic consumption and reduce reliance on trade, the World Bank said today.

Inflation that has risen steadily this year should level off and is unlikely to be a serious problem, the bank said in a quarterly China outlook.

The Washington-based bank raised its 2010 growth forecast from 9.5 percent to 10 percent and said the expansion should slow to 8.7 percent next year.

Growth eased to 9.6 percent in the three months ending in September, down from 10.3 percent the previous quarter, as the government imposed lending and investment curbs.

"We think that coming from this very strong growth, China should be able to ease into a more sustainable growth rate in the long term," said the report's main author, Louis Kuijs, at a news conference.

The outlook reflects China's status as the first major economy to rebound from the global crisis on the strength of a flood of stimulus spending and bank lending. While Washington and others are trying to shore up growth, Beijing faces the challenge of cooling inflation and restoring normal conditions.

Beijing needs to boost wages and consumer spending and promote growth of private and service businesses to reduce reliance on exports and energy-intensive heavy industry, the World Bank said.

"The need to rebalance to more domestic demand-led, service sector-oriented growth seems stronger now than five years ago," said Kuijs. "Internationally the environment is less favorable than it was."

Communist leaders made raising domestic consumption a priority in their latest five-year economic plan crafted at a meeting last month. But it also was a goal in their previous plan and private sector analysts say Beijing has yet to take major steps to shift emphasis away from manufacturing and construction.

The bank cautioned against abrupt steps such as mandating sharp wage hikes, saying Beijing instead should look at gradual changes such as allowing more rural workers to move to cities and changing energy prices that favor heavy industry.

"We are looking for a market-oriented, market-friendly way of getting this consumption growth, consistent with continued strong growth," Kuijs said.

Inflation that hit 3.6 percent in September, well above the 3 percent government target, should level off but might stay as high as 3.3 percent next year, the bank said. Kuijs said that in developing economies such as China, inflation of 3 to 5 percent might be acceptable as industries grow rapidly and demand for resources shifts.

The bank also cautioned that China's politically contentious trade surplus is likely to rebound in 2011 after narrowing temporarily this year.

The multibillion-dollar trade gap has strained relations with Washington and other trading partners and prompted some U.S. lawmakers to demand sanctions over Chinese currency controls blamed for widening the surplus.