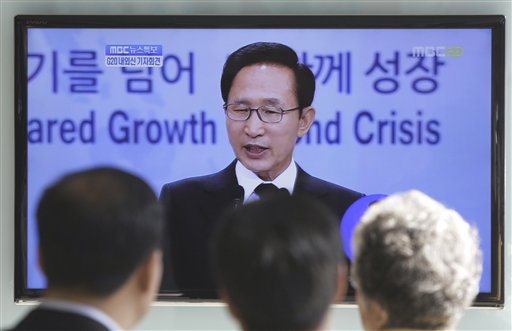 Group of 20 leaders know they must achieve "concrete agreements" including goals for reducing current account and trade gaps at next week's summit or risk having their leadership of the world economy called into question, South Korea's president said today.

Finance ministers and central bank governors from the group of leading rich and developing nations met last month in South Korea ahead of the summit scheduled for Nov. 11-12. They vowed to avoid using their currencies as trade weapons and promised to come up with a way to measure the reduction of destabilizing trade gaps.

Such imbalances — particularly between rich countries like the United States, which buys more than it sells to the rest of the world, and developing countries, such as China, that sell more than they buy — have caused tensions in the global economy that the G-20 has been working to defuse.

The G-20 includes wealthy nations such as the U.S., Japan and Germany and developing countries including China, Brazil and India. It has taken over leadership of the world economy since the 2008 financial crisis led developing nations to demand more of a say. The forum accounts for about 85 percent of the global economy.

"All of these leaders around the world understand the importance of coming up with concrete agreements and translating this into action," summit host and South Korean President Lee Myung-bak told reporters today.

How they perform "directly relates to the legitimacy and the effectiveness" of the group, he said.

"Because if ... the G-20 is unable to deliver on its promises, then many people, especially the skeptics, will question the viability and the legitimacy of the G-20."

At the finance meeting last month, U.S. Treasury Secretary Timothy Geithner had pushed in a letter for a commitment to polices that would reduce current account and trade imbalances "below a specified share" of gross domestic product "over the next few years."

Ultimately, the G-20 agreed that such imbalances would be "assessed against indicative guidelines to be agreed," reflecting the opposition of some export-reliant countries such as Japan.

Lee was optimistic that G-20 leaders, who include U.S. President Barack Obama, German Chancellor Angela Merkel and Chinese President Hu Jintao, can make progress on the issue of targets.

"Especially, I look forward to the leaders agreeing to an indicative guideline that will address the global imbalance," he said, though provided no details.

The summit in Seoul will be the G-20's fifth since its first in Washington in late 2008 was called to discuss how to deal with the global financial crisis and ensuing economic downturn. The group was established in 1999 and had held regular meetings of finance ministers and central bank governors.

The G-20 aims to reduce protectionism and reform the global economy through measures such as increased financial regulation to make it less prone to suffering the kind of crisis that occurred in September 2008 when the collapse of U.S. investment bank Lehman Brothers Holdings led to the worst economic downturn in decades.