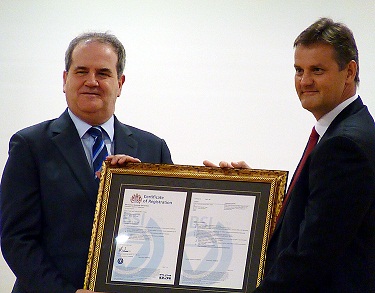 The United Kingdom's representative office in Taipei received international certification today for its efforts to reduce and offset its carbon emissions last year, making it the world's first government office to get such certification.

The British Trade and Cultural Office (BTCO) , which has 43 employees, offset the 204 tons of the carbon dioxide it emitted in 2009.

"I am very pleased to announce that today we will receive our carbon neutral certification for the PAS 2060 standard, " BTCO Director David Campbell said shortly before receiving the certification from the British Standards Institution (BSI) at a ceremony in Taipei.

"This means that the BTCO is carbon neutral, " he said. "We are the first government or trade office anywhere in the world to receive this internationally recognized standard."

In recent years, many organizations around the world have announced that they are carbon neutral, but "they have done this without following any standards to achieve the zero carbon emission," said BSI Asia Pacific Managing Director Mark Basham at the ceremony.

"Therefore, the public -- and this is the critical part -- have no way to know how much greenhouse gas is emitted, how much it offset, and where the offset credit comes from," he added.

Carbon neutral is a voluntary mechanism in which an activity, event, household, business or organization is responsible for no net emissions of greenhouse gases and can therefore be declared carbon neutral in that specific area.

Carbon neutrality can be achieved by reducing emissions as far as possible and then purchasing carbon offsets for any residual emissions in order to achieve zero net emissions.

The next step for the BTCO is to cut 10 percent of its carbon emissions this year through reducing its use of power and paper, and using more environmentally friendly goods.

In past years, the BTCO has also helped raise local companies' awareness of climate change issues in partnership with Taiwan's Bureau of Energy (BOE) under the Ministry of Economic Affairs and the Environmental Protection Administration by, for example, organizing seminars.

"With its high-tech industry and highly skilled workforce, Taiwan is well-placed to benefit from the commercial opportunities from leading the fight to cut emissions," he added.

The BOE has been helping local oil and power companies track and reduce their carbon emissions for almost a decade, the bureau's deputy head, Wang Yunn-ming, told CNA after the ceremony.

In addition, the government has vowed to have completed construction of 50 low-carbon communities around the country by the end of 2011.