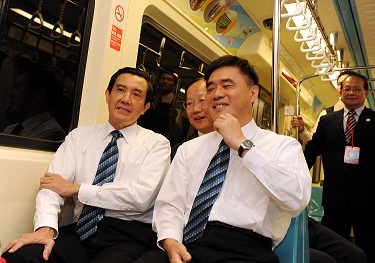 "We've moved from the Minor League to the Major League, " the president said at the line's inauguration ceremony this morning, referring to the threshold of 500 million passenger boardings required to become a member of CoMET, a benchmarking group composed of the world's biggest metro systems.

The Taipei MRT is currently part of the "Nova" international benchmarking group that covers small- to medium-sized metro systems.

In 2009, total passenger boardings for the year on the Taipei MRT system reached 462.5 million, and the new line is expected to handle an average of 170,000 passengers a day, or another 62 million more people per year.

The president also encouraged Taipei MRT employees to strive for the goal of offering the best service of any metro system in the world.

Meanwhile, Taipei City Mayor Hau Lung-bin expressed gratitude to everyone who contributed to the completion of the Luzhou Line, and he promised that the new line would greatly enhance the quality of life in the Greater Taipei area, which includes Taipei City and the future Xinbei City (now Taipei County).