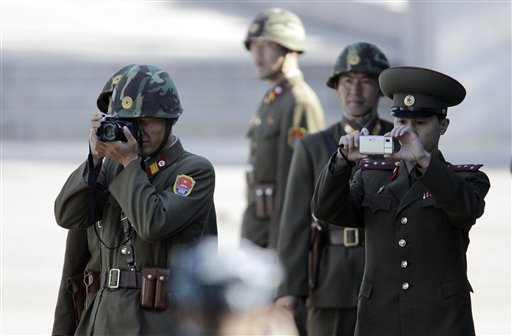 South Korea's navy fired warning shots to chase away a North Korean fishing boat that crossed their disputed sea border early Wednesday, the Defense Ministry said, in the latest flareup of tension on the divided peninsula just days before the Group of 20 summit in Seoul.

The North Korean boat intruded on South Korean territory for about two hours before returning to North Korean waters early Wednesday, the ministry said. The fertile maritime border, the scene of three deadly skirmishes between the Koreas, is a key flashpoint because the North does not recognize the line drawn by the U.N. at the close of the 1950-53 Korean War.

South Korea is bracing for any possible North Korean moves to sabotage next week's Group of 20 summit of world leaders. North Korea has a track record of provocations when world attention is focused on the rival South.

President Lee Myung-bak said Wednesday that he does not believe Pyongyang would strike South Korea but that Seoul was ready for anything.

His comments came a day after militants in southern Yemen blew up an oil pipeline operated by a state-owned South Korean company, Korea National Oil Corp., according to company officials. It was not clear whether al-Qaida's local offshoot was behind the attack, a Yemeni official said.

Tensions on the peninsula have been high since the mysterious sinking of a South Korean warship killed 46 sailors in March.

An international investigation concluded that a North Korean submarine fired a torpedo that sank the 1,200-ton Cheonan near the tense Korean sea border. North Korea flatly denied involvement and warned that any punishment would mean war.

North Korea disputed the probe's conclusion that an aluminum torpedo sank the warship, saying all of its torpedoes are made of steel alloy. The statement said the North is willing to hand over parts of one of its torpedoes to South Korea for verification.

In Seoul, the Joint Chiefs of Staff dismissed North Korea's latest denials as "nothing new."

Meanwhile, the U.S.-led United Nations Command on Wednesday returned the bodies of two North Korean soldiers that found in the river running through the heavily fortified inter-Korean border.

The village is jointly overseen by the U.N. Command and North Korea, an arrangement established in 1953 to supervise the cease-fire that ended the three-year war.