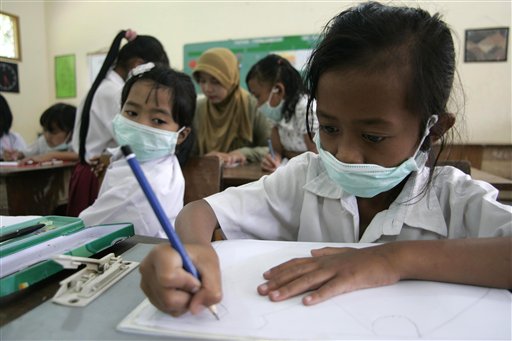 Indonesia's most dangerous volcano sent searing gas clouds down its scorched flanks today, while in the country's other disaster zone, tsunami survivors were thinking twice about rebuilding homes along battered coastlines.

The twin disasters, which unfolded simultaneously just over a week ago, have claimed nearly 470 lives and sent tens of thousands fleeing to crowded emergency shelters. They were settling in for the long haul today, with relief operations expected to take weeks, possibly months.

"This was a big one," said Safari Dwiyono, a state volcanologist, who believes multiple eruptions since the mountain sprang back to life on Oct. 26 has helped ease pressure building up inside the crater.

The government has ordered airlines to circumvent Merapi for safety reasons and two international carriers briefly canceled flights altogether to airports in nearby Yogyakarta and Solo.

Indonesia, a vast archipelago of 235 million people, is prone to earthquakes and volcanos because it sits along the Pacific "Ring of Fire," a horseshoe-shaped string of faults that lines the Pacific.

More than 800 miles (1,300 kilometers) west of the volcano, helicopters and boats were delivering aid to the most distant Mentawai islands, where an Oct. 25 tsunami swept entire villages to sea.

The death toll was lowered by three today to 428, said Ade Edward, a disaster official, with 75 others still missing. The figures were revised after compiling and comparing data from various private and government search and rescue teams, health workers and security forces, he said.

There has been talk in recent days, meanwhile, about relocating villagers away from vulnerable coastlines.

"I'm all for it," said Regen, who lives on Pagai Utara island and goes by one name. "We're all terrified now, especially at night, and wouldn't mind moving further inland."