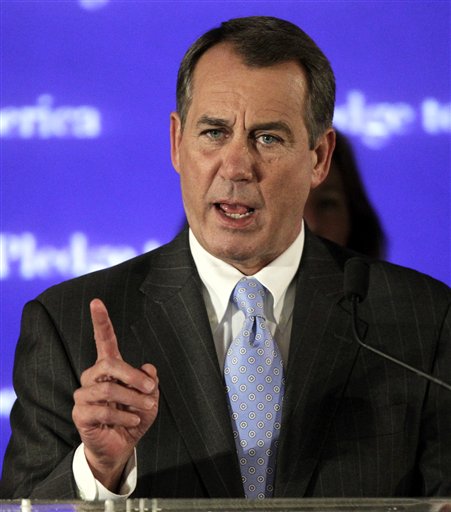 Republicans rolled up historic gains to seize control of the House on Tuesday, as voters disenchanted with the economy, President Barack Obama and government dealt a strong rebuke to Democrats in every corner of the country.

The GOP ousted Democratic freshmen and influential veterans, including some considered safe just weeks ago. Republicans piled up their biggest House gains since they added 80 seats in 1938: By early today, they had netted 59 formerly Democratic seats and led in five more. The GOP victory eclipsed the 54-seat pickup by the so-called "revolution" that retook the House in 1994 for the first time in 40 years and the 56-seat Republican gain in 1946.

Ascendant Republican leaders quickly pledged to heed the message of angry voters who they acknowledged were rejecting what both parties had to offer.

With the realities of divided government sinking in, Obama called Boehner to say he looked forward to working with him and the GOP "to find common ground, move the country forward and get things done for the American people," the White House said.

Boehner told the president he wanted to collaborate on voters' top priorities, creating jobs and cutting spending. "That's what they expect," the 10-term Republican said.

Licking their wounds, House Democrats defended their legislative record and campaign strategy and said they would try to compromise with the GOP.

"The outcome of the election does not diminish the work we have done for the American people," said House Speaker Nancy Pelosi of California, the first woman to hold the post. "We must all strive to find common ground to support the middle class, create jobs, reduce the deficit and move our nation forward."

By early today, the GOP had captured 238 seats and was leading for five more, while Democrats had won 183 and led for nine.

Democrats now control the House by a 255-178 margin, with two vacancies. All 435 seats were on the ballot.

Democrats had only picked up three Republican seats, and had lost some of their most powerful members, including Rep. John Spratt in South Carolina, the 14-termer who heads the Budget Committee, and Rep. Ike Skelton in Missouri, the Armed Services Committee chairman.

House Transportation Committee chairman Rep. James Oberstar, an 18-term veteran, was in a race too close to call in Minnesota.

Republicans defeated three dozen Democrats in districts won by Sen. John McCain of Arizona in the 2008 presidential campaign, as voters in exit polls expressed anxiety about the economy, disillusion with Obama and tea party-fueled distaste for government. GOP gains were particularly pronounced in the Rust Belt, with the party racking up two wins in Indiana, five each in Ohio and Pennsylvania, three in Illinois, and two in Michigan. They scored key victories from Maryland to Washington and broke House Democrats' monopolies in New England and in New York City — by defeating Rep. Carol Shea Porter in New Hampshire and Rep. Mike McMahon on Staten Island.

Among the victims were Ohio Rep. Steve Driehaus, Reps. Suzanne Kosmas of Florida, Frank Kratovil of Maryland and Tom Perriello of Virginia, first-termers who backed key elements of Obama's agenda — the president even campaigned for Perriello — and were savaged for it by their Republican rivals.

But those who stressed their independence from their party, like Reps. Glenn Nye of Virginia, Travis Childers of Mississippi and Bobby Bright of Alabama, also went down. Some old bulls also fell, including nine-term Rep. Earl Pomeroy in North Dakota, 13-term Rep. Paul Kanjorski in Pennsylvania and 20-year veteran Rep. Chet Edwards in Texas.

And Democrats thought to be cruising toward re-election were surprised to be caught up in an anti-incumbent tide. Seven-term Rep. Bob Etheridge in North Carolina lost to Sarah Palin-backed candidate Renee Ellmers, a nurse who got into the race in part because of the health care law. And conservative Democratic Rep. Gene Taylor in Mississippi was defeated by a late surge for Republican state Rep. Steven Palazzo, even after trying everything to distance himself from his party — including publicly confessing that he voted for McCain in the 2008 presidential election.

Democrats had few gains to celebrate. In one rare bright spot, John Carney handily beat Republican Glen Urquhart in the race to succeed GOP Rep. Mike Castle in Delaware's only House seat, which Castle left to unsuccessfully pursue a Senate seat. In New Orleans, Democrat Cedric Richmond beat Rep. Anh "Joseph" Cao, who had campaigned as a friend of Obama. And in Hawaii, state Senate president Colleen Hanabusa, for whom Obama appeared in TV ads, unseated Republican Rep. Charles Djou, running for a first full term after winning a May special election in Obama's birth-state.

A handful of Democrats heavily targeted by the GOP pulled through, including Reps. Betty Sutton of Ohio, Joe Donnelly of Indiana, Heath Shuler of North Carolina and John Yarmuth of Kentucky.

Voters went to the polls intensely worried about the economy and dissatisfied with the way the federal government is working. An Associated Press analysis of exit poll results found voters saying the economy eclipses any other issue as their top concern. They're also expressing dissatisfaction with Obama and Congress, and they don't have a favorable view of either political party.

It was a remarkable turnabout from 2008, when Obama helped propel Democrats to big gains in their House majority only two years after the 2006 wave that swept them to control. This year, few Democratic incumbents were safe, least of all the 51 who claimed Republican seats over the last four years.

House candidates and party committees raised and spent tons of campaign cash, and Democrats had a slight edge. The Democratic Congressional Campaign Committee spent US$145 million to bankroll its candidates, compared with US$121 million shelled out by the National Republican Congressional Committee. That's nearly double what the Democratic campaign arm spent in the last election, and more than five times what the Republican counterpart did when the tables were turned.

GOP candidates poured a total of US$419 million into their campaigns, while Democrats spent US$421.5 million.