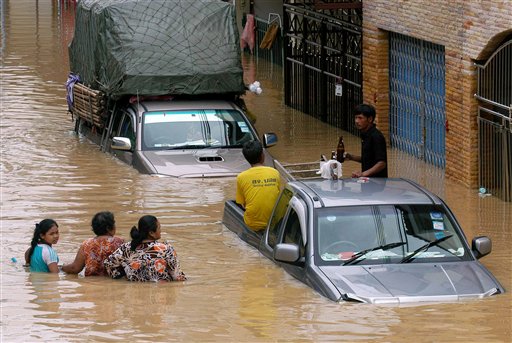 Thailand rushed soldiers and its only aircraft carrier to rescue residents in a key southern city submerged by the latest flooding that peaked as high as rooftops, after 107 people died from deluges in the northeast last month.

The southern commercial hub of Hat Yai was transformed into a murky waterway with roads completely inaccessible by cars. Trains to the city were canceled.

Floodwaters were as high as rooftops in some areas of Hat Yai yesterday, but the water had receded by half on Wednesday to about 4 feet (just over 1 meter), said Vijit Thammasaro from the province's disaster prevention office.

A tropical depression that dumped constant rain on the area Sunday and Monday triggered the flooding, which forced the closure for a second day of the airport on Samui island, a popular tourist getaway in the Gulf of Thailand.

Thailand's meteorological department said the storm was moving west, away from Thailand, but warned of 13-foot (4-meter) waves in some coastal areas and the possibility of landslides and flash floods for residents in low-lying areas.

"I'm confident the situation has started to resolve," Prime Minister Abhisit Vejjajiva said Wednesday, a day after calling the flooding "one of the worst natural calamities" to hit the country.

Thailand's only aircraft carrier, which rarely leaves its berth, was deployed to help out and was expected to reach the coastal waters off Hat Yai by midday Wednesday. It carried helicopters, marine amphibious landing craft and thousands of meals to distribute to residents.

Abhisit said that relief efforts had been complicated by rapid currents in flooded areas that prevented the use of regular motorboats, but boats with bigger engines had been mobilized to reach the troubled areas.

Abhisit was asked if reports were accurate that 100,000 people were trapped in Hat Yai, and he replied, "not that many."

Defense Minister Prawit Wongsuwan said the army, navy and air force had deployed thousands of soldiers for the rescue effort.

The deluge in Thailand's south — along a peninsula it shares with Malaysia — follows two weeks of heavy floods in October, mostly in central and northeastern Thailand, that killed 107 people. Nearly 6 million residents of 38 provinces were affected by October's floods, according to the government's Disaster Prevention and Mitigation Department.

Abhisit said earlier that the floods were caused by heavy rains that dumped larger-than-normal amounts of water into dams and reservoirs and aggressive housing and business development that has affected natural drainage channels.

The new flooding has caused a dilemma of whether to evacuate people or try to bring supplies to where they are stranded.