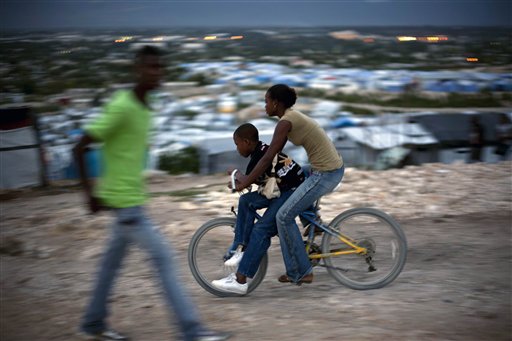 It was the jewel of Haiti's post-earthquake recovery: an organized relocation camp with thousands of tents billed as hurricane-resistant, lined up in neat rows on graded mountain soil.

Now, staring down an expected hit later this week from a hurricane, officials say Corail-Cesselesse is not safe. Yesterday, the government advised the estimated 7,850 residents of its primary relocation camp to ride out the storm somewhere else.

"We're asking people in Corail to voluntarily move from where they are and go to the houses of family or friends. The places the government has identified are churches and schools that are available for shelter from the storm," Haiti civil protection official Abel Nazaire told The Associated Press.

Camp managers held a "loudspeaker meeting" with megaphones to tell residents about the evacuation order, said Bryant Castro, the American Refugee Committee staffer managing the camp. Residents were told to seek any home they could find and are expected to start leaving as soon as Wednesday.

A hurricane over the weekend, Tropical Storm Tomas was in the central Caribbean late yesterday with maximum sustained winds of 40 mph (65 kph), according to the U.S. National Hurricane Center in Miami. Its center was about 385 miles (620 kilometers) south-southwest of Port-au-Prince and moving west near 8 mph (13 kph).

Forecasters predicted it will veer north toward Haiti and slow in its forward movement. The forecast said Tomas was likely to strengthen over the next 48 hours, and could regain hurricane strength by Friday. A hurricane watch was issued for Jamaica, and the center said the storm could dump up to 8 inches (20 centimeters) of rain on Aruba, Bonaire and Curacao.

Tomas has already killed at least 14 people and left seven missing in the eastern Caribbean nation of St. Lucia, where it caused more than $37 million in damage. In nearby St. Vincent, the storm wrecked more than 1,200 homes and caused nearly $24 million in damages to crops, especially bananas — one of St. Vincent's top commodities.

It would be the first big storm to strike Haiti since the Jan. 12 earthquake killed as many as 300,000 people and forced millions from their homes. It would also be the first tropical storm or hurricane to hit since 2008, when Fay, Gustav, Hanna and Ike battered Haiti in the space of a month, killing nearly 800 people and wiping out 15 percent of the economy.

If it follows its predicted track it could hit every major Haitian city including Port-au-Prince, Les Cayes, Gonaives and Cap-Haitien. The U.N. Office for the Coordination of Humanitarian Affairs said rainfall of up to 5 inches (13 centimeters) could cause catastrophic floods in the severely deforested country.

Aid workers are scrambling to prepare but are badly short of supplies including shelter material because of the responses already under way to deal with the aftermath of the earthquake and an unprecedented cholera outbreak that has killed more than 330 people and hospitalized more than 4,700.

Some of the biggest concern is for 1.3 million earthquake survivors still living under tarps and tents nearly 10 months after the disaster. The government said there are some shelters in the capital — a handful have been built in nearby Leogane and several hours north in Gonaives — but basically people will be on their own if Tomas hits.

An enormous international aid effort flowed into Haiti in the immediate wake of the quake, but reconstruction has barely begun, in part because donors have not come through with promised funds. The United States has not provided any of the $1.15 billion in reconstruction aid it pledged last March.

When Corail opened in April, it was portrayed as a model for how camps could be built and run. A joint effort by the Haitian government and international aid groups, including U.N. peacekeepers and U.S. military engineers, it was billed as a refuge from dangerous hillside camps that Haitians had set up on their own in the days after the quake.

Corail's residents were selected from the spontaneous camp taken over by actor Sean Penn's relief organization, sprawled over a country club golf course in the capital. Residents were told they would be better off on a distant desert plain 9 miles (15 kilometers) north of the city, far from their former homes and jobs.

"I signed up. I didn't know where I was going. My home was destroyed. I had nowhere else to go," Jonel Romelus, a 36-year-old mason who moved to Corail, said yesterday.

But an AP investigation in July revealed the site's selection was tainted by conflict of interest: The land under it belonged to the company led by the government's chief relocation adviser, Gerard-Emile "Aby" Brun. The choice put his company in position to receive government compensation for the land.

It also promised to create a community home for thousands of people who would need jobs, a boost for the Brun company's negotiations with a South Korean garment firm, Sae-A Trading Co. Ltd., to build factories next door. In September, the company signed a memorandum of understanding with Haiti's prime minister and U.S. Secretary of State Hillary Rodham Clinton to build the factories.

The day after AP's investigation was published, torrents of water and high winds from a storm collapsed 344 tents in Corail and sent 1,700 people — a quarter of the camp — fleeing for new shelters.

The dangers have only become clearer since.

"I would say ... that insufficient analysis was done on exploring all the options before selecting the Corail site," said Castro, the camp's manager. "The Corail site is located on a flood plain, and hydrologically it's not a sound location."

Oxfam spokeswoman Julie Schindall said aid workers are concerned about delivering services to the camp if roads from Port-au-Prince flood.

"This goes back to the original thing: No, (Corail is) not a safe place to live," she said. "We knew a hurricane was going to come — this is Haiti, this always happens — and we have not had a level of reconstruction that gets people under tents into houses."

At this point there is little to be done before the storm. Romelus said his family — his wife, two daughters ages 2 and 5, a sister and nephews — will stay in the camp unless the government can provide shelter. They have nowhere else to go.

"God will protect me. I'm not going to be the only one (staying Corail). If something happens, we'll deal with it," he said. "If they could have moved more quickly and built more houses, it would have been safer."