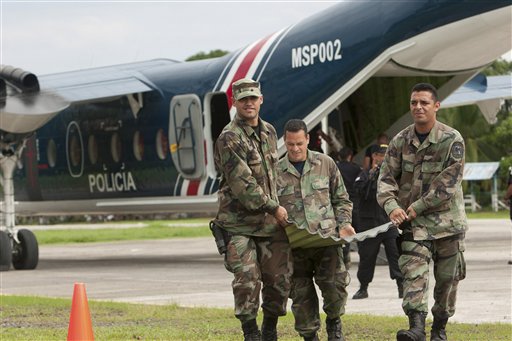 Costa Rican officials are preparing to go before the Organization of American States today to seek support in a dispute with Nicaragua over the river dividing the two countries — continuing a lengthy feud between the Central American neighbors.

Nicaraguan President Daniel Ortega said in a message on his country's national television late Tuesday that the United Nations' highest court should decide on the matter and not the OAS.

"Let the court say who is right, not guns or threats," Ortega said. "The court has the power and the instruments to determine that. The OAS doesn't have anything like that."

"I want to make clear that Nicaragua does not want to fall into a provocation," he said.

Ortega reiterated that Nicaragua has sovereign rights over the San Juan River and accused Costa Rica of being "an expansionist nation that has historically tried to negotiate what it doesn't own."

The river has been a source of disputes for nearly two centuries. Last year, the United Nations' highest court set travel rules for the San Juan, affirming freedom for Costa Rican boats to navigate the waterway while upholding Nicaragua's right to regulate traffic.

The latest argument stems from a Nicaraguan project to dredge the river. Costa Rica objected to the plan when it was announced last year.

Costa Rican Foreign Minister Rene Castro said at a news conference Tuesday that he hopes the OAS will take swift action and send a commission to the conflict area to assess the situation.

Nicaraguan Deputy Foreign Minister Valdrak Jaentschke said his country is working on a response for the OAS meeting.

Costa Rica said that after receiving reports of Nicaraguan soldiers on its soil, it initially sent some 70 police reinforcements to the border area Oct. 22, a day after it formally complained to Nicaragua's ambassador about the dredging.

Nicaragua's army chief of staff, Gen. Julio Aviles, said he has soldiers on the Nicaraguan side of the border as part of an anti-drug operation.

Aviles contended the allegation about troops crossing the border comes from a Nicaraguan drug-smuggling family living in Costa Rica that is trying to undermine Nicaragua's anti-drug fight.

"The army has always maintained a constant guard on the San Juan River in its fight against international drug trafficking and at no time has violated international norms and treaties, nor has it invaded foreign territory," Aviles said.