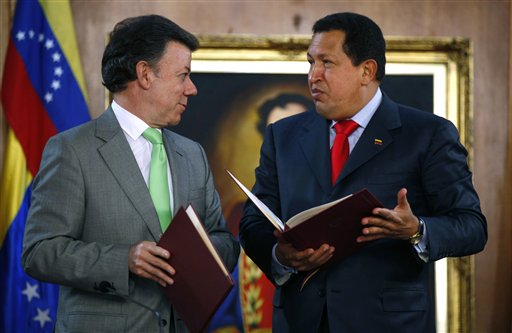 They agreed to resurrect plans for a natural gas pipeline stretching from Venezuela to Central America and also revived a proposal to build an oil pipeline from Venezuela's oil fields to Colombia's Pacific coast.

"We've begun to build these relations," Chavez said after spending more than three hours with Santos during the Colombian leader's first visit to Venezuela since taking office Aug. 7.

The agreements in energy, trade and other areas came after Chavez and Santos agreed in August to restore full diplomatic relations that had been severed as Santos' predecessor, Alvaro Uribe, prepared to leave office. Santos and Chavez have since pledged to repair trade relations undermined by years of accusations and mutual distrust.

Santos said the two countries have turned a corner.

"We've gone from good-intentioned statments to concrete accords," he said.

Santos said earlier, before his meeting with Chavez, that although Caracas and Bogota have had their differences, "we need to work together."

"We will be brothers forever," Chavez said of the two nations after receiving Santos at the presidential palace, where a military band played both national anthems and soldiers in colonial-era uniforms stood at attention.

Chavez feuded for years with Uribe and severed diplomatic ties in July in response to allegations that Venezuela's socialist-oriented government has provided safe haven to leftist Colombian rebels. Chavez denies his administration turns a blind eye to guerrilla camps in Venezuelan territory.

Relations also hit a rocky patch in March 2008, when Chavez protested a Colombian cross-border bombing raid in Ecuador that killed a top leader of the Revolutionary Armed Forces of Colombia.

Santos was Uribe's defense minister at the time and ordered the operation.

Trade between the two nations, traditionally strong, fell drastically during Uribe's last year in office, as Chavez ordered officials to stop buying food from Colombia and signed agreements with allies such as Argentina and Brazil to replace Colombian imports.

Since this year's election in Colombia, however, both Santos and Chavez have sought rapprochement.

Chavez said he hopes "no foreign force is capable of provoking any type of damage in these fraternal relations," a reference to the United States, which is a close ally of Colombia. Chavez, a self-proclaimed "revolutionary," has repeatedly accused Washington of attempting to impede Latin American integration.