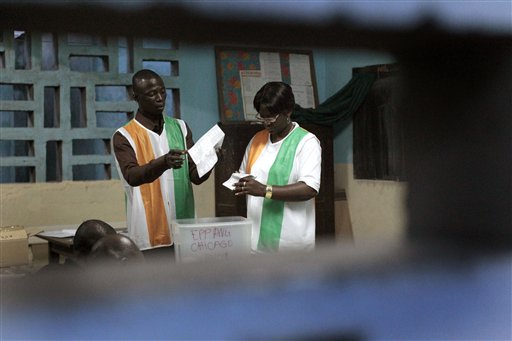 Electoral commission spokesman Bamba Yacouba has announced vote tallies from about 2.2 million of the country's 5.7 million registered voters so far. The results show Gbagbo with about 35 percent of votes cast, compared to roughly the same amount for opposition leader Alassane Ouattara, according to an Associated Press tabulation.

Ex-president Henri Konan Bedie was in third place with about 27 percent.

The vote, the first since a brief civil war split the world's No. 1 cocoa producer in two, is seen as a critical turning point in Ivory Coast's history. Many hope it will restore stability and reunify the country, but some worry it could trigger unrest if political rivals fail to accept the outcome.

Uncertainty and a two-day-lapse in releasing results from Sunday's poll have fueled new fears of possible unrest. On Tuesday, many businesses and restaurants in the main city, Abidjan, shut down or sent workers home early, and highways in the skyscraper-lined city were void of usual traffic jams.

The head of the armed forces, Gen. Phillipe Mangou, went on state television to urge residents to go back to work as normal and stay calm.

If no candidate wins a simple majority, the top two finishers will face off in a second round Nov. 28.

Earlier Tuesday, the head of the European Union's 120-strong observer mission, Cristian Preda, criticized the electoral commission for delaying the release of results, saying the failure to do so was fueling tension among a nervous electorate.

Preda said the EU had detected no fraud in Sunday's poll and praised authorities and voters for having carried out peacefully. But he raised questions about transparency in ballot counting, accusing the electoral commission of barring 14 EU monitors from centers where ballots were being collated in several parts of the country. Those include, crucially, the commission's headquarters in Abidjan, where national results are being released.

EU observers at the electoral headquarters confirmed separately that since counting began Sunday night, they had been unable to enter the room where national results are being tabulated.

"It's an act that we deplore, and there is no rational explanation for it," Preda said. "Everything must be transparent."

Preda said that in some counting centers Tuesday morning, his observers were still being refused entry because authorities had told them "there is nothing to see."

Tadet said that although monitors could observe counting at polling stations and regional centers across the country, they were not allowed to observe the final tabulation of results at the independent electoral commission headquarters.

The U.S.-based Carter Center also said one of its monitors had been told to leave a vote counting center in the capital, Yamoussoukro. But others had no problems and the mission generally praised the electoral process, as did the African Union. The Carter Center said voter turnout had been higher than expected, at about 74 percent.

Preda said EU monitors spread across the country had noted minor problems at polling stations during Sunday's vote. About 80 percent of stations opened hours late because materials were not ready; not all electoral members were present in some; and one-tenth of ballot boxes were not properly sealed.

But he said the EU was generally satisfied with the vote itself, and preoccupied now with the critical phase of monitoring the vote count.

The vote had been delayed for five years because of disputes over voter rolls. Gbagbo, whose five-year mandate officially expired in 2005, stayed in office claiming elections were impossible because of a 2002-2003 war that left rebels in control of the north.

Ivory Coast has been struggling to hold the vote since a 2007 peace deal broke years of political stalemate, leading to the dismantlement of a U.N.-patrolled buffer zone that had marked the divide between the rebel-held north and the loyalist south.