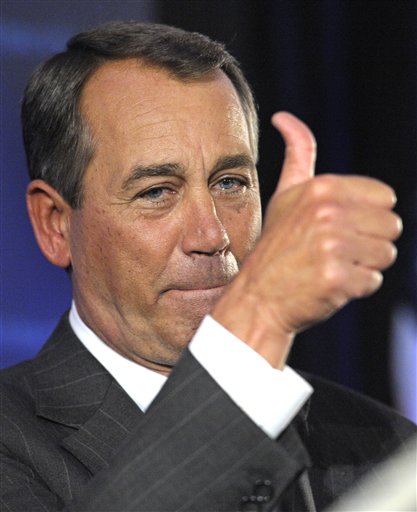 The House becomes the headquarters for the nation's surly mood toward government as Republicans pivot from the campaign trail into a two-year attempt to neutralize President Barack Obama's agenda.

The Republican takeover of the House positions Rep. John Boehner, 60, the up-from-his bootstraps Ohioan, to become speaker and ends Nancy Pelosi's four-year run as the nation's first woman in the job.

"We hope President Obama will now respect the will of the people, change course, and commit to making the changes they are demanding," Boehner said at a late-night rally. "To the extent he is willing to do that, we are ready to work with him."

For his part, Obama called Boehner and McConnell around midnight to congratulate them, the White House said. Obama told the GOP leaders he was looking forward to working with Republicans to "find common ground, move the country forward and get things done for the American people."

"The outcome of the election does not diminish the work we have done for the American people," she said, urging Republicans and Democrats to work together "to create jobs, reduce the deficit and move our nation forward."

She did not say whether she wants to continue to lead the Democrats in the next Congress.

The Republican gains in yesterday's elections foretold certain conflict with Obama over taxes, job creation, government regulation and the president's $814 billion economic stimulus program. Republicans were shifting the conversation from spending to cutting by vowing to slash about US$100 billion from the tabs of recession-weary taxpayers.

Boehner and McConnell, who already work in close coordination, signaled they would dare Obama to veto bills that create jobs or cut the government's spending, size and reach — all strongly supported by an angry electorate. A GOP attempt to repeal Obama's signature health care overhaul, for example, could be politically valuable if passed by the House and Senate, and then vetoed, Republicans say.

"The surest way to achieve all of them is to elect a president who won't veto any of them," McConnell said of GOP goals.

Her own future as Democratic leader in question, Pelosi was defiant.

"We are not going back to the failed policies of the past," Pelosi shouted to supporters last night.

Controlling the House will shine a harsher light on rifts within Republican ranks. GOP leaders quickly will have to deal with differences over earmarks, the much-derided special funding that lawmakers mark for hometown projects. Tea party candidates who railed against "back-room deals" may find themselves confronted with the reality that dealmaking — even compromise — is often the only way to change policy. McConnell and Boehner, especially, could face a difficult time managing the same freshmen rebels who boosted their power.

Much of the palace intrigue centered in the House. With Boehner at the helm, Rep. Eric Cantor, R-Va., 47, should move up from the vote-counting whip to majority leader.

Rep. Kevin McCarthy, the Californian who led the drafting of the GOP's "Pledge to America" and recruited many of the GOP's successful House challengers for the election is favored to replace Cantor. Rep. Pete Session, R-Texas, who spearheaded the House campaign operation, also may seek the whip's job.

Boehner earlier this fall used his amiability to quash any talk of Cantor challenging him for speaker after the Virginia Republican, McCarthy and Rep. Paul Ryan of Wisconsin published a book about how they'd run the House in a post-Boehner era.

"The three of them know that my job is to make sure that they're well-qualified and ready to take my place," Boehner said with a semiserious grin at a book party, "at the appropriate moment."

On the Democratic side, speculation abounds over whether Pelosi, 70, would lead a smaller caucus more in line with her more liberal views — but with considerably less power. She was resolute to the end about not discussing the prospect of defeat. In her only comments last evening, she was defiant.

Should Pelosi step down, Majority Leader Steny Hoyer is considered the frontrunner to replace her as Democratic leader. That would make room for a roster of rising Democrats to run for leadership positions.

Reid's win likely kills a Democratic leadership race for the top spot that had been simmering between his deputies, Sens. Dick Durbin of Illinois and Chuck Schumer of New York.