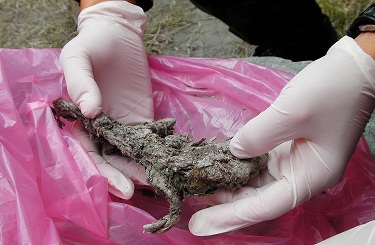 Tires and other vehicle parts were retrieved from the sea near the Suhua Highway yesterday as military personnel continued their search almost two weeks after 23 people went missing in bad weather.

As of last morning, search and rescue teams had found three tires, a piece of leather, a two-meter long frame and something that resembled a vehicle fender in the water within 15 meters of the beach below the highway, said the Ministry of National Defense (MND).

Rescuers believed the items belong to a tour bus carrying 21 people, which is thought to have been buried by mudslides or pushed into the ocean by rockslides that were triggered by heavy rain in late October. The number of missing and dead totals 26.

Body parts, personal belongings and vehicle remains have already been retrieved from the water off Yilan County in northeastern Taiwan.

The MND deployed land and sea troops totaling 625 servicemen to search areas near two collapsed sections of the highway connecting Suao and Hualian. A human bone was discovered two days ago at the highway's 112.8-kilometer marker, and metal was detected underground a day earlier near the 114.5km point.