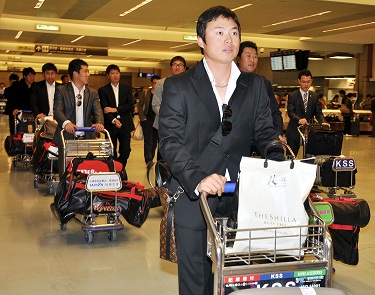 Wyverns coach Kim Sung Keun praised this year's champions of Taiwan's Professional Baseball League (CPBL) when he arrived at Taoyuan International Airport with a group of over 50 players and staff.

But Kim went on to say that "while the Elephants are a very good baseball team, the SK Wyverns are confident of victory."

Kim said his team was ready to play good baseball and was keeping a professional attitude toward the championship, adding that he felt the two teams are evenly matched.

A prize of NT$8 million (US$262,640) is up for grabs for the team that wins both games, with the loser receiving NT$2 million. Both teams will receive NT$5 million in the event of a tie.

The championship, jointly organized by the CPBL and KBO, will be held at the Taichung Intercontinental Baseball Stadium in central Taiwan.