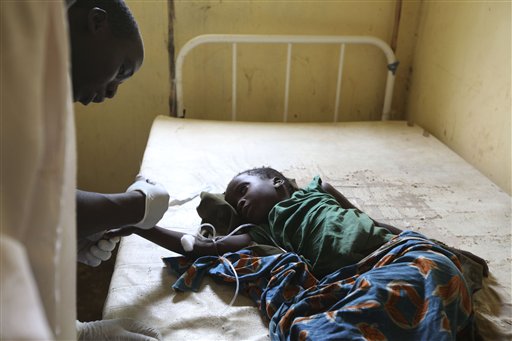 More than 1,500 people have died in Nigeria from a cholera outbreak this year, international health officials said Monday, more than double the last estimates provided by federal officials.

The deaths come as the waterborne illness continues to plague other West African nations, including tiny Benin, where humanitarian officials worry a devastating flood there may spread it further. But officials hope oil-rich Nigeria will see fewer cases in the coming weeks as the dry season approaches and local governments attempt to warn people of the danger.

Geneva-based UNICEF spokeswoman Marixie Mercado said Monday that as of Oct. 20, there had been 1,555 deaths in Nigeria from cholera recorded this year, with 38,173 cases reported. At last count in September, when local and federal officials in Nigeria assured the public the disease was under control, Nigeria's Health Ministry said there were under 800 dead and 13,000 people sickened.

According to the World Health Organization statistics, the current outbreak is the worst in Nigeria since 1991, when 7,654 people died.

Cholera is a fast-developing, highly contagious infection that causes diarrhea, leading to severe dehydration and possible death. The disease is easily preventable with clean water and sanitation but in places like West Africa, sanitation often remains an afterthought in teeming city slums and mud-walled villages.

In Nigeria, almost half the country's 150 million people lack access to clean water and proper sanitation, according to the WHO, even though the government earns billions of dollars a year as one of Africa's top oil exporters. Poor basic education among rural villagers and a lack of staffed clinics and hospitals also allows the disease to quickly lead to deaths, said Chris Cormency, a UNICEF official based in Senegal monitoring the epidemic.

"Most people have heard of cholera but have never been touched directly by cholera," Cormency said. "Next year, it might come up in the same state, but in a different region."

The most affected regions in the nation remain Bauchi, Borno, Katsina and Yobe states, Cormency said. All four sit in Nigeria's rural north, comprised mostly of small Islamic villages where locals survive off the land through crops, cattle and petty trading. In many villages, sewage flows down dirt paths at each heavy rains during Nigeria's wet season, allowing feces to contaminate communal wells.

However, local authorities have made efforts to combat the spread of the disease. Dr. Nuhu B. Ningi, a World Health Organization physician based in Bauchi state, said public health education programs coupled with chlorinating local wells has brought down the caseload seen by area clinics in recent days.

Local religious leaders, both Christian and Muslim, have been preaching about the disease as well.

UNICEF officials believe the West African outbreak this year began in Nigeria, then spread to Cameroon, Chad, Niger and Benin. Benin remains particularly worrying for health officials, as flooding in the nation has covered two-thirds of the country's territory, leaving about 100,000 people homeless and killing at least 43 in the last two weeks.

So far, more than 800 cases of cholera have been reported in the nation.

"You have to be extremely vigilant now as we already have cases," Cormency said.