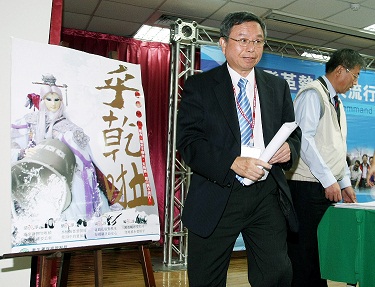 A central epidemic command center will be set up this week to stem the spread of dengue fever as the mosquito-borne disease has been rapidly spreading in the country, the Department of Health (DOH) said yesterday.

DOH Minister Yaung Chih-liang said at the Legislative Yuan that he and Stephen S.H. Shen, minister of the Environmental Protection Administration (EPA), will head the command center, which will be set up yesterday exclusively to curb the spread of the disease.

The center will also establish ad hoc command centers in Taiwan's southern counties of Kaohsiung and Tainan, the hardest hit areas, said Chang Feng-yee, director-general of the DOH's Centers for Disease Control, who was also present at the Legislative Yuan's Q-and-A session.

This has led the DOH to speculate that the number of indigenous dengue fever cases will probably surpass 1,000 this year.

There is no vaccine for dengue fever. The disease causes severe flu-like symptoms and has the potential to be fatal.

Yaung said one of the reasons for the increase in cases in Taiwan is that the spread of dengue fever has been raging in Southeast Asia this year, indirectly causing the numbers of both imported and indigenous cases to go up in Taiwan.

Another reason is that some residents have been opposed to health workers spraying insecticide in their neighborhood, Yaung said.

"The central epidemic command center will do its best to stem the disease, but I cannot promise that it will be eradicated once and for all," Yaung said.

He was responding to questions raised by ruling Kuomintang Legislators Hou Tsai-feng and Hsu Shao-ping, both of whom criticized the government for not doing a good enough job in preventing the spread of dengue fever in the past two months.

Hsu accused the DOH and the EPA of not cooperating with the local governments of Kaohsiung and Tainan to clean up the environment to facilitate the eradication of mosquitos.