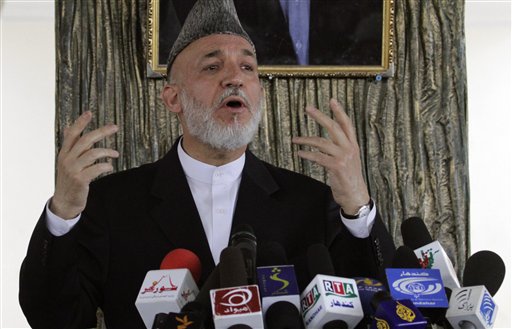 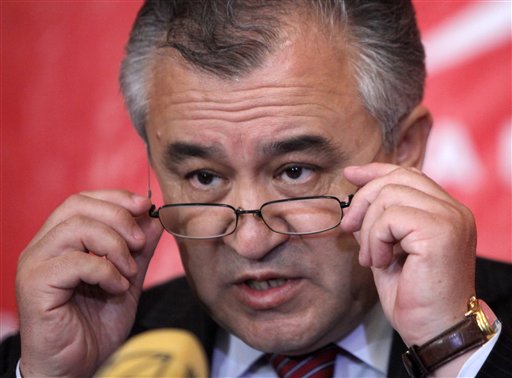 Kyrgyzstan's attempt to bring parliamentary democracy to Central Asia got off to a rocky start Monday with an election surprise that handed a leading position to a nationalist party opposed to the country's new constitution.
Kyrgyzstan, which hosts a U.S. air base vital to the Afghan war effort, voted Sunday to elect a new and empowered parliament with the right to approve a government and appoint a prime minister.
International monitors on Monday hailed the conduct of the vote as a victory for democracy, but the success of nationalist Ata-Zhurt party could set the stage for the reversal of recent successful efforts to dilute the powers of the presidency.
Confounding expectations, the party pulled ahead with around 8.6 percent of eligible votes, with almost 95 percent of ballots counted. The other four parties that appear to have overcome the five percent threshold of votes required to enter parliament were trailing slightly.
The vote came after an exhausting year of political turbulence and ethnic violence in the south.
President Kurmanbek Bakiyev was ousted in April in violent public demonstrations over stagnant living standards and corruption. Clashes between ethnic Kyrgyz and minority Uzbeks in the south of the country in June left more than 400 people dead, most of them Uzbeks, and displaced around 400,000 people.
The authority of parliament was boosted after changes to the constitution were overwhelmingly approved in a nationwide referendum in June. That model sets the country apart from the other former Soviet republics in Central Asia, where power is usually held in the hands of authoritarian leaders.
But with Ata-Zhurt and other opponents of the new constitution faring well in the elections, there is a chance those changes could now be reversed.
"The results of this election have set a bomb under the new parliamentary system," said political analyst Toktogul Kakchekeev.
More than 55 percent of the country's 2.8 million eligible voters cast their ballot.
The Central Election Commission has provided information on the percentage of votes based not on ballots cast but on the overall number of eligible voters.
The pro-Russia Ar-Namys party, which garnered 7.5 percent of eligible votes, is another vocal opponent of the parliamentary system and views it as a recipe for instability.
Ar-Namys leader Feliks Kulov has been courted assiduously by Moscow, and his pre-eminence could spell trouble for the U.S. base, whose presence in the former Soviet country has long been an irritant to Russia.
Ata-Zhurt party leader Kamchibek Tashiyev has also spoken strongly against the U.S. base, which serves as a key hub for fuel supplies and a transit point for troops traveling to Afghanistan.
Meanwhile, the leader of the Respublika party, which came fourth with 7.1 percent, indicated to The Associated Press that he was open to working in parliament.
"There are no parties that we would rule out joining in a coalition," said Babanov, a successful businessman who enjoyed a brief and troubled period as deputy prime minister under the Bakiyev regime.
Bartering and negotiations will be the order of the day in the coming days and weeks, and further surprises and shifts should be expected.
Another surprise in the election was the mediocre performance of the parties that came to power and formed an interim government immediately after Bakiyev's ouster.
The Social Democratic Party of Kyrgyzstan was trailing in second place with 8.1 percent of the eligible vote. Socialist-leading Ata-Meken, which also backed Bakiyev's ouster and had been seen as the most likely winner of the election, was trailing others with only 5.8 percent of the eligible vote.
The failure of these parties to claim a bigger share of the vote suggests popular disillusionment with the often stumbling and erratic style of crisis management they demonstrated while forming part of the interim government.
Despite their lackluster showing, some major compromises might enable one or both parties getting into power, possibly by forging an alliance of convenience with Respublika.
The Organization for Security and Cooperation in Europe's election-monitoring arm praised the elections Monday, saying they were marked by political pluralism that further entrenched democracy in the Central Asian nation.
"I have observed many elections in Central Asia over the years, but this is the first election where I could not predict the outcome," said Morten Hoglund, who coordinated the short-term OSCE observer mission.
Although the preliminary assessment was glowing overall, the OSCE noted some shortcomings in election laws and called on the Kyrgyz government to carry out comprehensive reforms.