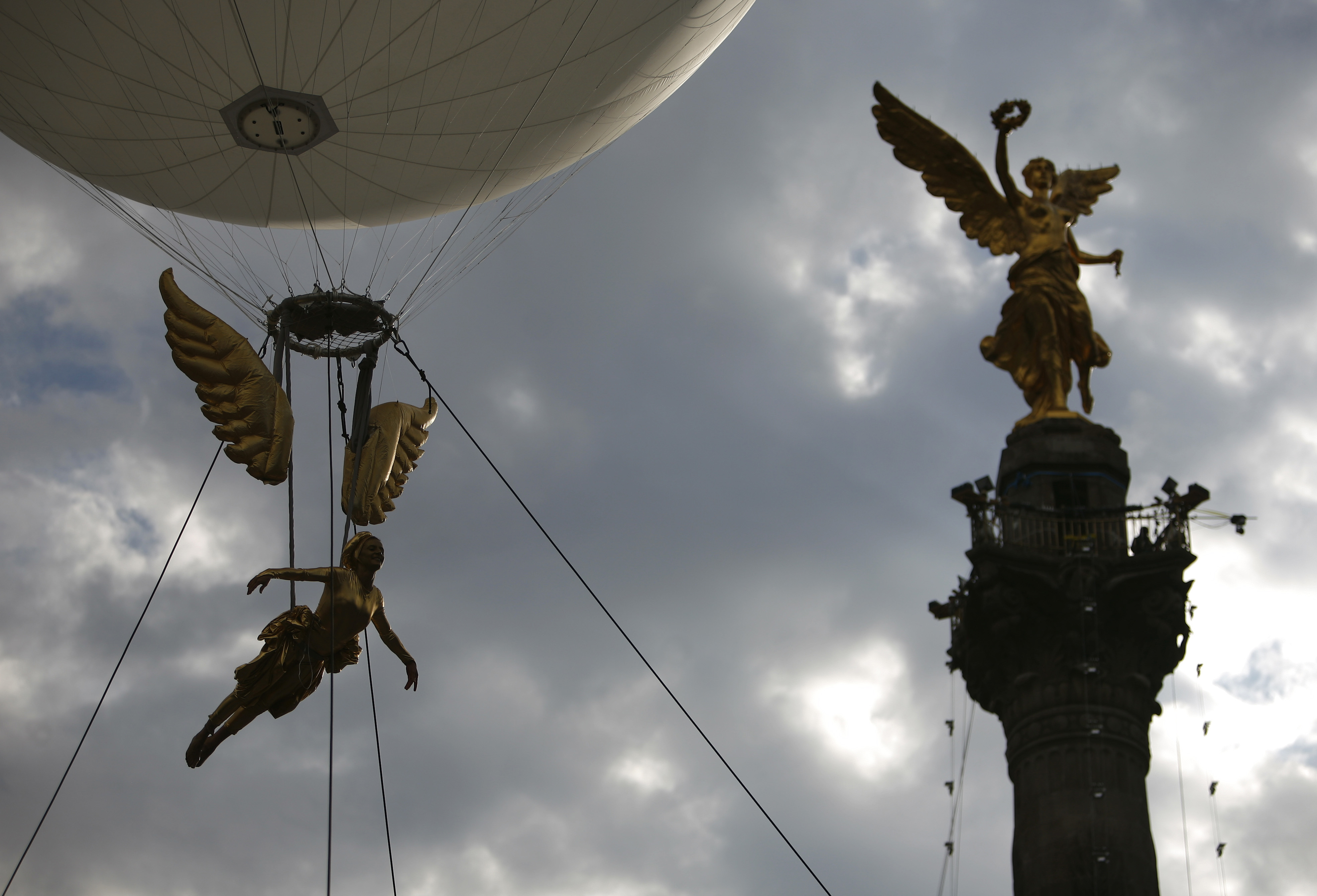 Just one day without massacres, beheadings or shootouts.
On its 200th birthday Wednesday, Mexico wanted its citizens - and the world - to forget its vicious drug war and remember the country's epic history, music, whimsical folk art and continuing crusade for wider prosperity and democracy.
All were on display with a US$40 million fiesta, two years in the making. About 60,000 revelers - many wearing sombreros and face paint with the red, white and green of the Mexican flag - crowded along Reforma Avenue, the capital's main promenade, cheering and yelling "Bravo!" at the start of the 1.7-mile (2.7km) parade of floats and dances designed by the country's top artists.
Another 25,000 gathered early at the main Zocalo plaza, where President Felipe Calderon delivered the traditional "Grito" - three shouts of "Viva Mexico" - to celebrate the 1810 uprising that resulted a decade later in independence from Spain.
Some traveled to the capital from all over Mexico to celebrate on the streets, despite the country's escalating drug violence that increasingly has claimed innocent lives.
"This one is special," said Iris Mari Rodriguez Montiel, a small business owner who had traveled from the Gulf Coast state of Veracruz and waited since morning for the festivities to start. "It gives me chills just to think about it. I love Mexico. There's only one Mexico."
Little girls wearing ribbons of the Mexican flag watched from the shoulders of their fathers, and other children blew trumpets as the air filled with confetti. Marchers with green, red and white cacti sprouting from their heads formed a sea around an enormous newspaper boat sporting phrases from the independence era.
"It's like a Carnival of Rio, plus an Olympic ceremony, plus Woodstock all put together in the same day," said artistic director Marco Balich, who produced the opening and closing ceremonies of the 2006 Turin Winter Olympics. "For the cost of a warplane, you can celebrate the birthday of a country."
Several neighboring heads of state and U.S. Labor Secretary Hilda Solis were attending.
Still, anxiety hovered over the festivities with a heavy presence of law enforcement, some with police dogs.
In the back of many people's minds was the violence of the past year: The assassination of a gubernatorial candidate. The slaughter of 19 people at a drug rehabilitation center. The massacre of 72 migrants who refused to smuggle drugs for a brutal gang.
Military helicopters buzzed overhead, heavily armed federal agents and metal detectors greeted revelers. In some of Mexico's most violent cities, the festivities were canceled for fear of a drug cartel attack.
"We should be proud of all we've achieved," said Daniel Mendiola, a 64-year-old retiree who eyes were glued to a giant screen in front of the Angel of Independence monument on Reforma. But he said he would leave as soon as the parade, skipping a concert of big-name acts planned afterward.
"We have this doubt," he said. "The idea that there will be problems later on."
While drug violence during a grand festival would have been unheard of just a few years ago - even cartel capos celebrate religion and family in Mexico - that changed during independence celebrations in 2008. A grenade attack blamed on a cartel killed eight revelers, including a 14-year-old boy, in Calderon's home state of Michoacan.
Prosecutors in the Caribbean coast resort of Cancun said they were investigating whether six men detained Wednesday with assault rifles and hand grenades had planned an attack during the bicentennial festivities.
There was still hope, though, that the drug war would take a holiday.
"In Mexico, we all live in fear. And the worst part is that we are starting to get used to it," said Eric Limon, 33, a professional dancer who volunteered to wear a jaguar mask and swing a colorful Aztec club and spear for the parade.
"I want to be part of something important," said Limon, who was part of the parade. "I know this won't solve our problems, but this is my grain of sand to create a sense of unity. This is what Mexico needs."
The parade also featured a battalion of 13-foot-tall (4m-tall) marionettes - soldiers of the 1810 Independence war and the 1910 Mexico Revolution controlled by several operators - marching thunderously as women, children and even dogs run to join the fight, and replicas of the giant Olmec heads and Mayan pyramids, celebrating ancient peoples whose language, dress, food and customs endure in modern Mexico.
Many people were staying home to watch the festivities broadcast on TV and the Internet.
"It's not clear what we have to celebrate. It's 200 years of independence, but there is as much insecurity as freedom in Mexico," said Anita Guerrero, 20.
Guerrero planned to be at the main plaza in the Pacific resort of Acapulco for that city's Grito - but only because she needed to make money selling enchiladas to the crowd.
"You never know if you will make it safely home," she said.
Still, it was hard to keep Mexicans away from a party.
"To celebrate the identity of a country, especially in this moment in Mexico, I think is really needed," Balich said. "Especially for the young to be proud of their identity, to make an optimistic statement at a difficult time."