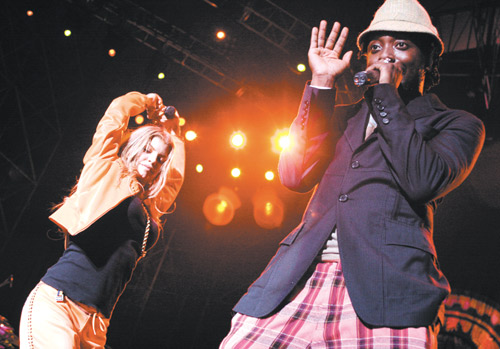 Promoter Melvin Yen was not oblivious to the dangers of hosting an open-air concert in the middle of typhoon season, but seemed quietly confident that last night's Black Eyed Peas Concert would go ahead as planned.
Only "cats and dogs" would scupper proceedings, said Yen.
On the eve of the concert, the whipping wind that often proceeds storms was a little ominous, but things had brightened up by yesterday afternoon to such an extent that the chance of Zhongshan Stadium becoming a receptacle for "pea soup" had receded into the background.
"I don't think it was going to rain," said Peas frontman will.i.am before the gig. "I think they were just trying to scare us," he quipped.
"We were in Miami and there was a hurricane happening and it was red alert," chipped in Taboo, who joined original member will and apl.de.ap in forming the Peas in the mid '90s. "But we still managed to overcome the obstacles and rock Miami."
And though there were no such hurdles last night, the Peas put their heart in soul into a well-choreographed and enjoyable performance, opening with "Hey Mama," and getting the crowd going with a theatric rendition of "Shut Up" that saw will and the Peas first lady Fergie engaging in a a great tit-for-tat exchange.
Fergie also gave revelers a preview of the first single from her first album "The Dutchess" (sic). The tune "London Bridge" was hardly a classic, but was executed with the same gusto Fergie put into everything. Her voice doesn't have the refinement associated with nobility but what she lacks in sophistication was made up for with power.
At the press conference she was presented with a "London Bridge" cake, which no one seemed to notice was actually Tower Bridge. Some of compatriots made a similar mistake a while back. Asked about being associated with the much maligned former Duchess of York, famous for some rather embarrassing escapades, Fergie said: "I don't mind at all ... Basically I'm not afraid to take the piss out of myself."
One of the downsides to last night's performance was the delay to the Peas taking the stage. After the announcers umpteenth typhoon-related excuse was met with a volley of bottles and obscenities, things soon got under way, but more than an hour and half late. The other negative point was the size of the crowd: the blue and grey concrete of the stands stood out with surely less than half of Zhongshan's 10,000 plus seats occupied.
Regardless, it was an enjoyable affair and the Peas are off to Manila today where Apl, who was born in the Philippines and met Arroyo last time the Peas performed there, will get to drop some more verses in Tagolog.
"Kumusta sa lahat ng mga Filipino na nandito at maraming salamat sa inyong suporta," was his message to his Filipino friends in Taiwan (Hello to all the Filipinos here and thanks for the support).