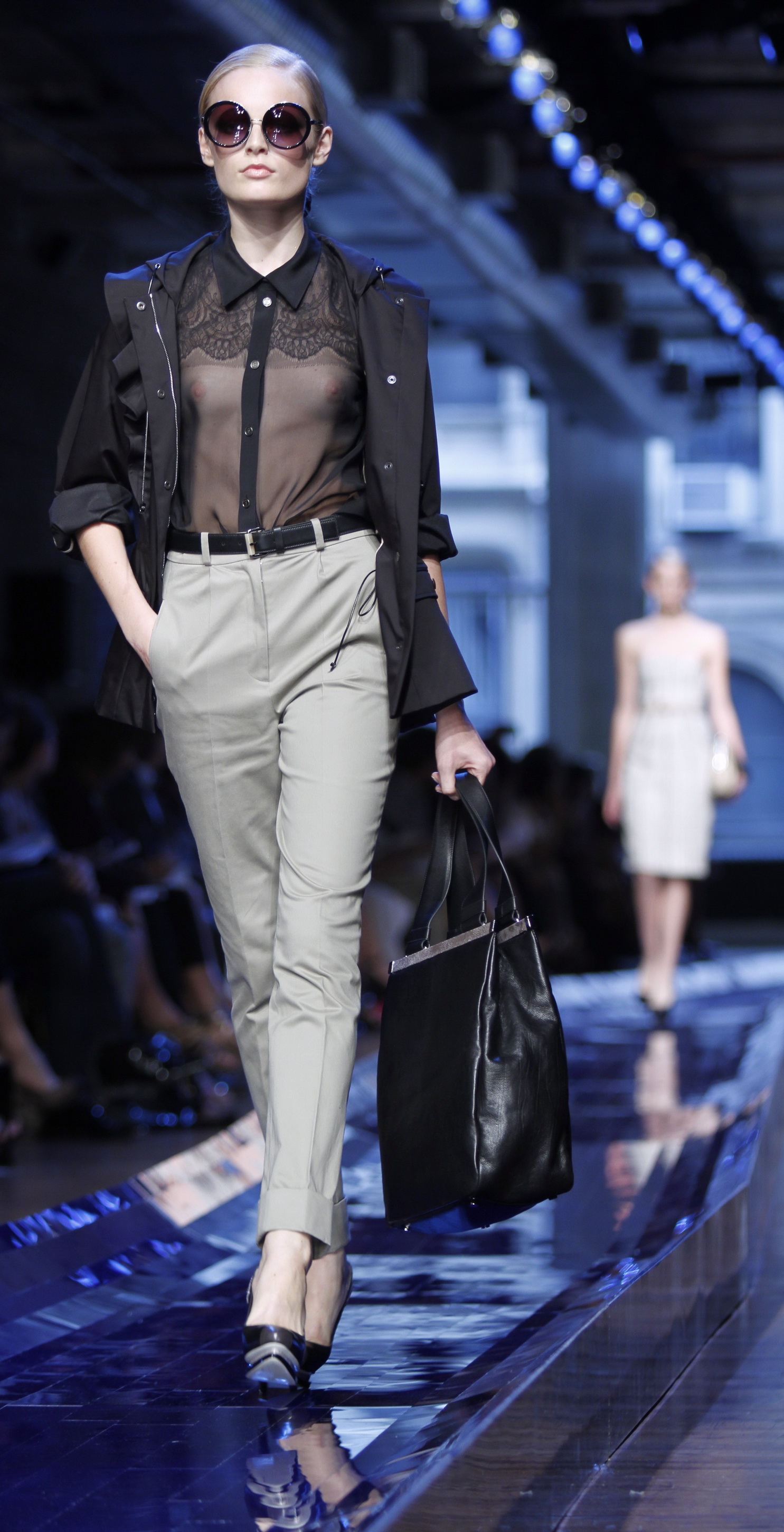 At Fashion Week as in life, opposites attract.
A yin-yang theme emerged on Friday on the second day of New York Fashion Week as designers turned to a harmonious blend of opposites.
At Rag & Bone, that meant mixing delicate, pretty pieces with the hard-edged style of an adventurer. Jason Wu mixed tailored, conservative suits with underpinnings that were sheer and sexy. Daniel Vosovic, the “Project Runway” alum, went for country influences presented in an urban way.
And in one of the odder yin-yang moments so far, daytime queen Ellen DeGeneres walked the runway for nightlife king Richie Rich.
Later Friday, just about everyone with his or her name on a label fanned out all over the city for Fashion’s Night Out, a shopping event that aims to court consumers with personal appearances from designers and celebrities, champagne and snacks, and games such as ping-pong and poker.
RAG & BONE
Enough with the tough-girl or buttoned-up stuff: The Rag & Bone woman is ready for an adventure.
You have to hope, though, that when she’s skydiving or Bungee-jumping, she’ll pull the right ripcord and not have her parachute pants fall down. Don’t worry, these aren’t the too-baggy ‘80s parachutes -- they were inspired by the real deal, with rugged zippers, straps and lace-up details.
But for the yin yang that is emerging as a must-have, designers Marcus Wainwright and David Neville offered crafty macrame looks, in colorful prints and luxe camel, that perhaps would be the souvenirs for their globe-trotting muse.
The palette was rooted in white, though, another popular trend during the second day of previews.
There were touches of glamour here, too -- good for a girl’s night life. A gauze, mint-colored shirt was paired with silver trousers, and a sand-colored suede top was worn with a silver lame skirt that had an opposites-attract white eyelet hemline.
JASON WU
What white gown?
Designer Jason Wu will forever be linked -- and surely thankful -- to Michelle Obama for the white, one-shoulder gown he designed for the inaugural balls. But fast-forward almost two years, and Wu is a fashion force in his own right, with a stylish spring collection, new lines of handbags and shoes, a beauty collaboration (CND nail polish) and his own logo: an owl.
In a walk-up space in SoHo with a fancy curved blue runway that mimicked a stream that had “bridges” over it, the models were dressed mostly in elegant sheaths, feminine blouses and pleated trousers. Wu showed his lighter side, too: He mixed ‘80s-style bold stripes on knit pullovers with a floral chiffon draped skirt, and a floral oxford shirt unexpectedly complemented a petal-covered, gray-and-black skirt.
One lime-colored dress with a petal bustier might have gone too far on the whimsical side. Put it this way, one can’t imagine Mrs. Obama in it.
In his notes, Wu explained his choice of the owl, which he dubbed Miss Wu. It’s one of his favorite animals, both familiar and playful, he said. “Wu ... Wuuu.”
Get it?
BCBG
Max Azria did some spring cleaning on his runway.
With no bells and whistles, the lingering look of the spring collection came from the little bit of flounce that trailed behind the models in loose white- and sand-colored minidresses and jumpsuits.
The silhouettes were airy and ethereal. Who couldn’t use a little linen dress with a bit of embroidery that could be the key piece of a weekend-getaway wardrobe?
The one potential stumbling block for many of the pieces was the super-short length. Presumably, when they hit stores, that will be adjusted, but for the likes of model Coco Rocha and actress Ashlee Simpson -- both in the front row -- the fingertip-length dresses would be cute.
Easier for mere mortals might be the maxi dresses, including the white silk seersucker dress with a plunging V on both the front and back that opened the show.
PETER SOM
Peter Som’s new offering of bouncy, cheerful clothes started the day on a happy, energetic note with his mash-up of color, print and texture.
If sand shades have dominated the spring collections so far, Som provided the exception. He started with a hot-pink, marble-print, high-neck shirt under a violet floral brocade dress, and followed that with colors such as “pool,” “hibiscus” and “popsicle.”
Shiny, stiff “snakeskin” kept T-shirts and shift dresses lively.
The pink “postcard” print used for a bikini top -- that was worn with a tweed-trimmed cardigan -- as well as a sleeveless shirt that paired with a pouffy bouquet tulle skirt just screamed summer fun.
Som continues to push unexpected combinations, which keeps his collection youthful but not too trendy. He did tap into the seemingly popular look of the season that mixes delicate sheers with tailored styles.
RICHIE RICH
Richie Rich brought out the ballerinas and a bit of raunch, with Ellen DeGeneres thrown in.
Dancers in tulle dresses, including one playing the violin, opened the show Thursday night, accompanied by a woman acting the DJ with headphones and a turntable.
One model wore a yellow and hot pink dress with a large hot pink bow in the front. Another was dressed in a strapless hot pink stretch satin frock with ruffles. One model wore a garment that showed his bare behind. Other men were dressed in leather jackets and short-shorts, walking the runway with female models in bikinis.
DeGeneres closed the show in a silver and blue suit, strutting with Richie Rich as confetti rained down.