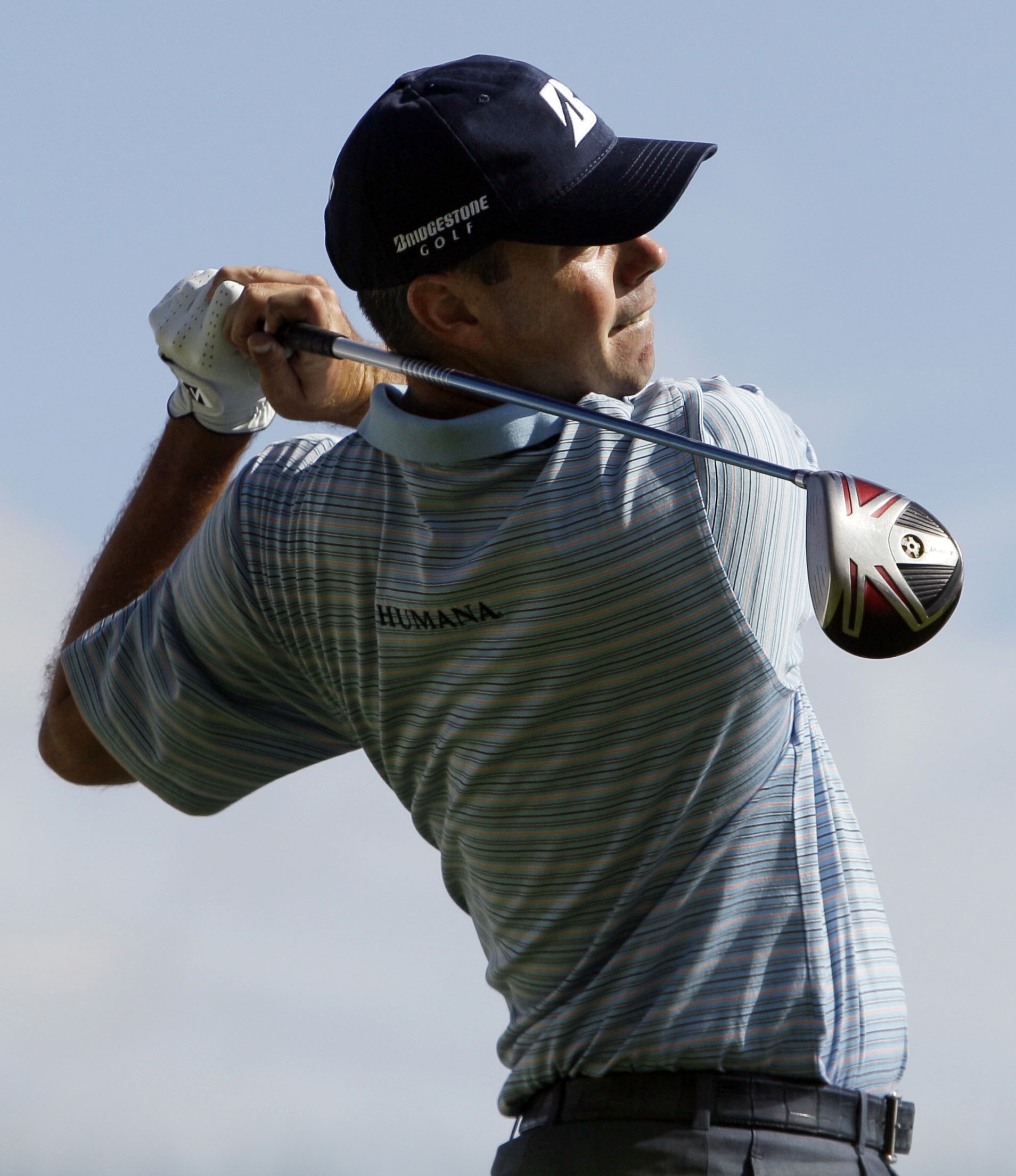 Matt Kuchar made his best start of the year on Thursday, seizing the first-round lead of the BMW Championship as defending champ Tiger Woods endured his worst round at Cog Hill since 2005.
Kuchar, who won the opening FedEx Cup event, capped a seven-under 64 with a 20-foot birdie putt at his final hole -- the ninth.
He had a one-shot lead over Ryan Moore, while England’s Ian Poulter posted a 66.
Poulter, who has just one top-10 finish since his WGC Match Play Championship triumph in February, was the best of the afternoon starters, bouncing back after opening his round with a double bogey.
Woods also opened with a double bogey, and never fully recovered.
A bogey on 18 gave Woods a two-over 73 and left him with a massive amount of work to do to advance to the final round of the playoffs -- the Tour Championship in Atlanta.
It was Woods’s highest round at Cog Hill since he opened with a 73 in the 2005 Western Open. His score ended a streak of 11 straight rounds in the 60s on the public course where he has won five titles.
When the round concluded, Woods spoke about what he must do not to catch Kuchar, but to finish in the top 30 of the FedEx Cup standings to secure his place in the Tour Championship.
“As of right now, I’m only five shots back out of that spot,” said Woods, who likely needs a fifth-placed finish to move on to the playoff finale. “That’s not bad.”
Kuchar tops the playoff standings thanks to a solid season and his victory a fortnight ago at The Barclays.
Last week at the Deutsche Bank Championship he faded on the weekend to finish equal 11th.
A bout of laryngitis kept Kuchar’s post-round comments brief, but he said his formula was simple.
“Just keep playing,” Kuchar said. “I was driving it well. I was actually doing everything well. It felt very good. Last week was a little bit suspect, and this week I kind of figured some stuff out.”
Moore, who came into the event 58th in the playoff standings, said he had expected this to be his last tournament for some time.
However, his plans could change to include the Tour Championship after a first round that included a a seven-birdie binge on the back nine.
That included holing out from a bunker on 11 and five straight birdies to end his round.
“I certainly wasn’t expecting to do that,” Moore said. “I hit a horrible tee shot on 11 with an even worse lay-up, and then I hit a terrible shot from there into a bunker and then holed out.
“Just got a little positive momentum going from there.”
Poulter got off to a tough start when he hit his tee shot right at the 10th hole. His approach was in a bunker, and his shot out over the green. He missed a four-foot putt en route to a double bogey, but was able to turn things around.
“Nice first round,” he said. “Not a very nice first hole, mind you.”
Phil Mickelson ended with a bogey on the par-five ninth hole for a 72, a score that did little to increase his limited affection for Cog Hill.
Woods is a fan of the course, but that didn’t help him much on Thursday.