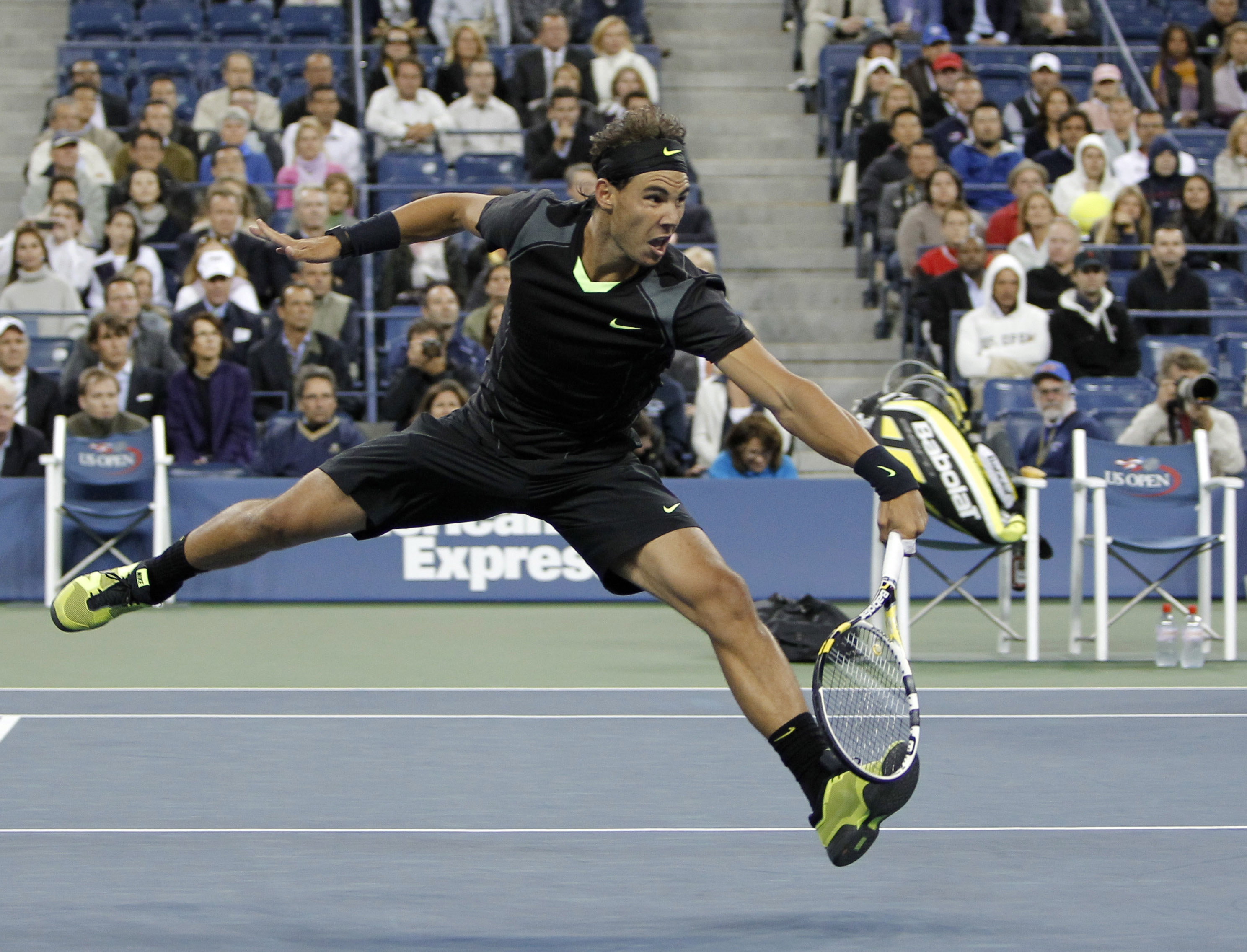 World number one Rafael Nadal, seeking his first U.S. Open title to complete a career Grand Slam, advanced to the last four on Thursday by defeating eighth-seeded Spanish compatriot Fernando Verdasco.
Nadal, who has not lost a set in the tournament, rolled 7-5, 6-3, 6-4 and will play for a finals berth on Saturday against Russian 12th seed Mikhail Youzhny, who ousted Swiss Stanislas Wawrinka 3-6, 7-6 (9/7), 3-6, 6-3, 6-3.
“It was a very important victory,” Nadal said. “It’s a very nice feeling to be in the semi-finals third time in a row in one of the most important tournaments in the world, for me right now probably the most important.”
Nadal has reached the U.S. Open semi-finals for the third year in a row but has never made it to final, losing to Britain’s Andy Murray in 2008 and eventual winner Juan Martin Del Potro of Argentina last year.
“For me, the semi-final is amazing but I have to keep playing better if I want to win the final,” Nadal said. “It’s a great thing for me, especially without losing a set. I played every day better.”
Nadal seeks his ninth career Grand Slam title and third in a row in 2010 after Wimbledon and the French Open. Only Roger Federer, Pete Sampras and Rod Laver have won three Slams in a row in the Open Era that began in 1968.
Swiss second seed Federer, a 16-time Grand Slam champion, and Serbian third seed Novak Djokovic meet in the other semi-final. Both were off Thursday but barring rain Nadal must win three matches in four days to claim the title.
“I have to play my best tennis,” Nadal said. “That’s the only way I’m going to get to the last round.”
Nadal could join Federer, Andre Agassi, Don Budge, Roy Emerson, Rod Laver and Fred Perry as the only men to complete the career Grand Slam, but says his main concern now is Youzhny.
“I’m always focused on next match. I never look that far away,” Nadal said.
“I’m in semi-final. I don’t think about the final.”
Nadal, 24, has a 7-4 career record against Youzhny, but has won four of their past five meetings, most recently in the 2008 fourth round at Wimbledon.
Youzhny’s four triumphs over Nadal have all come on hardcourts, including a 2006 U.S. Open quarter-finals upset.
“He’s number one. He won two Grand Slams (this year). He plays really, really well,” Youzhny said. “It will be a tough match, but I hope not only for me to be a tough match.”
The Russian could foil hopes for a Nadal-Federer final at the only Grand Slam where they have never played in the title match.
“I’m ready to be bad person,” Youzhny said. “I’d love to be bad person in this case.”
In blustery winds at Arthur Ashe Stadium, Nadal connected on 66 percent of his first serves and made only 16 unforced errors compared to 41 for Verdasco to stretch his Grand Slam win streak to 19 matches.
“Very difficult to play, one of the more difficult days,” Nadal said. “Serve was important. It was difficult to have big serves with the wind. When you throw the ball it was very difficult to control.”
Verdasco fell to 0-11 lifetime against Nadal but had the edge early.
The showdown of left-handers began when Verdasco, seeking his first U.S. Open semi-final, took the first service break of the tournament off Nadal to seize a 2-1 lead, Nadal netting a forehand to surrender his serve at love.
Verdasco, 26, saved a break point in the fourth game when Nadal sent a wind-blown forehand long. But Verdasco double-faulted away a break in the eighth game to draw Nadal level.
“For the game I need to do to beat Rafa, these conditions were very bad for me,” Verdasco said. “My game plan was to push him all I can with my serve. It was very difficult to even make the toss of the ball.”
Nadal, who has dropped only three sets in 11 matches with Verdasco, broke at love in the 12th game to take the set, the last point on a forehand volley winner.
Nadal, 106-1 in Grand Slam matches when he wins the first set, broke for a 4-2 lead in set two, pressured Verdasco sending a cross-court forehand wide on the pivotal point, and held twice more to win the second set.
“It was important for me to be focused all the time, moving the legs and waiting for the mistake of the opponent because it’s difficult to control the shots,” Nadal said.
The Spanish superstar, 90-0 in Grand Slams when winning the first two sets, broke to begin the third set and held from there to advance in two hours and 22 minutes.