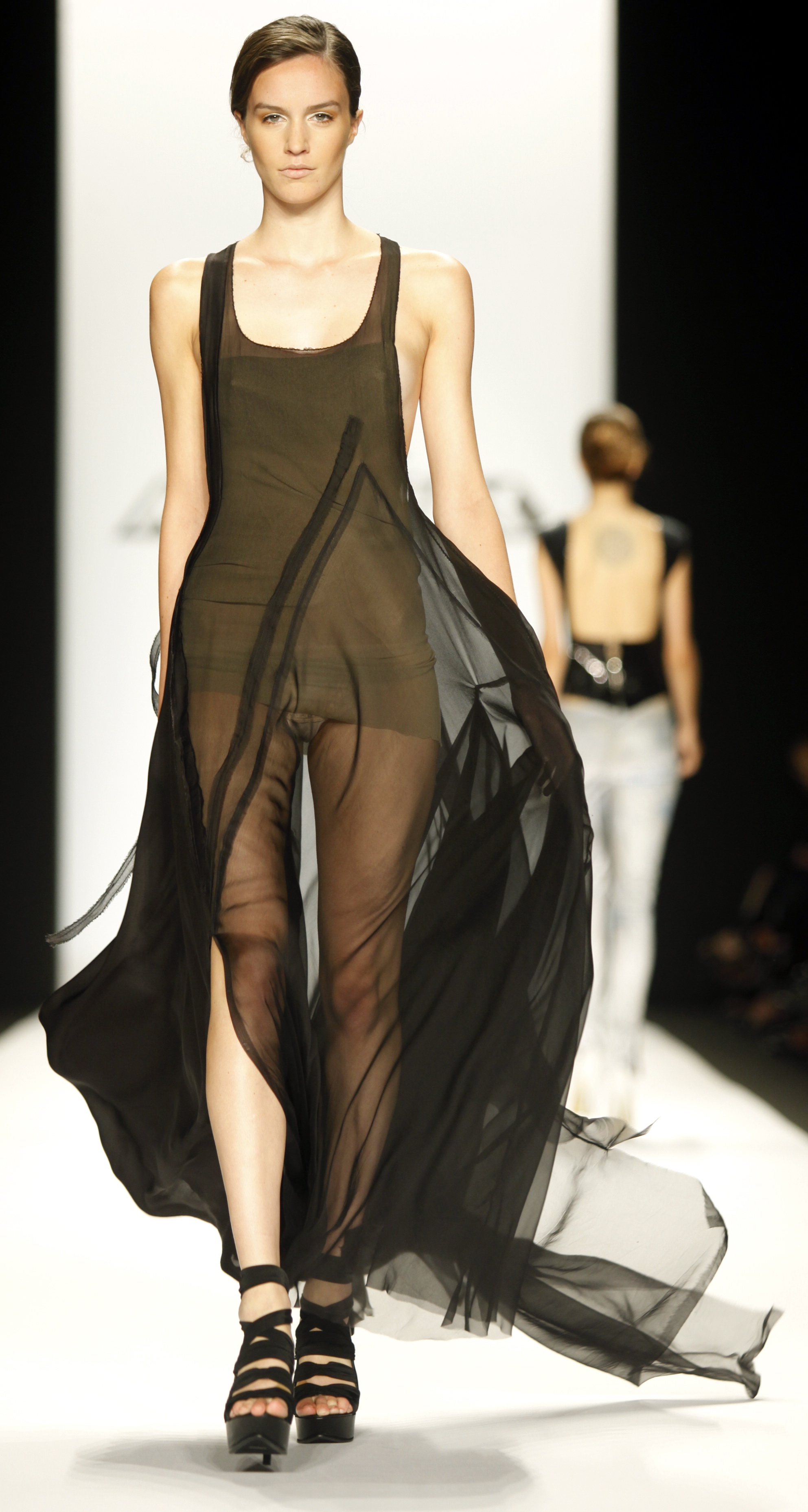 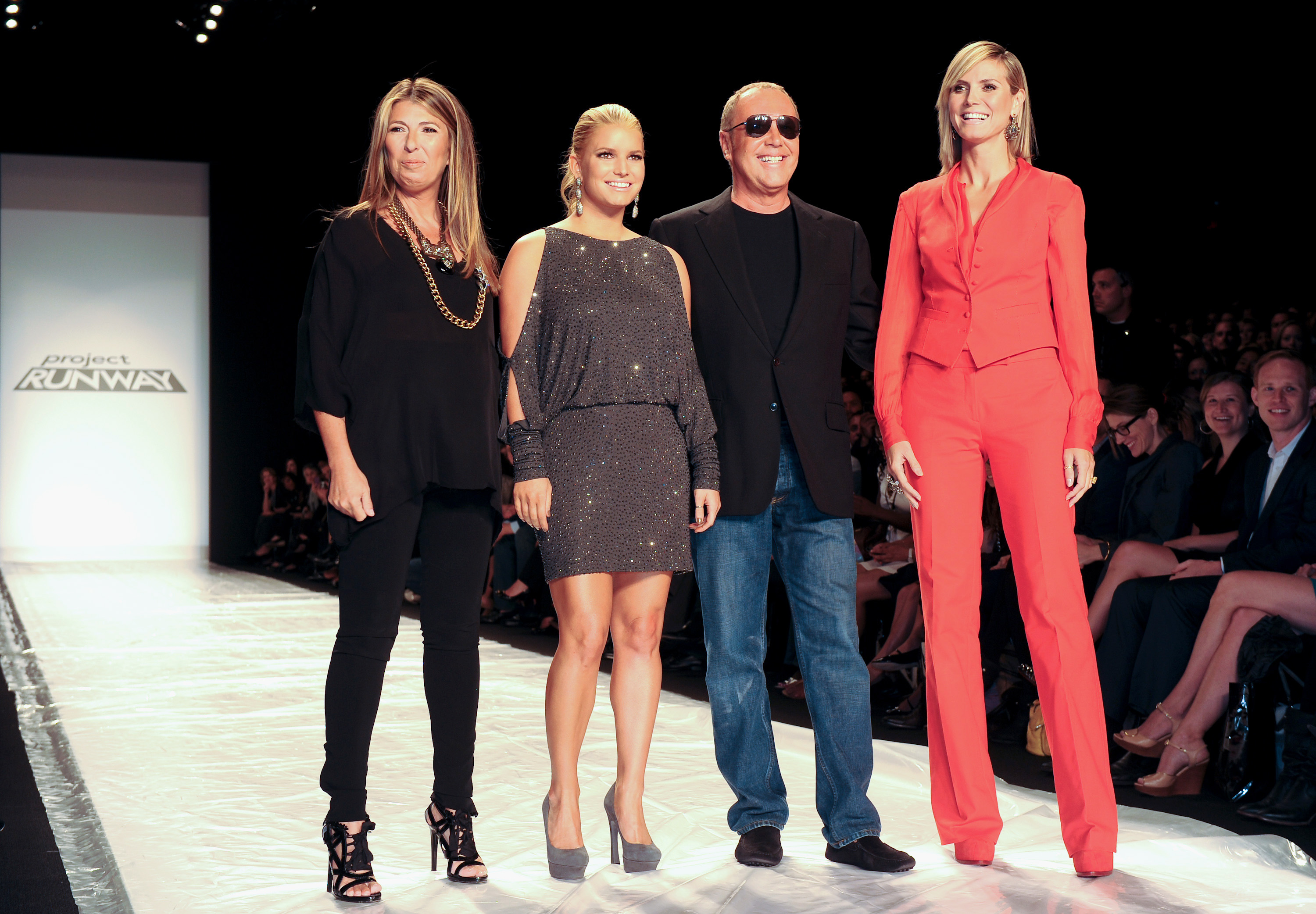 New York Fashion Week brought its cutting-edge style uptown on Thursday, opening its spring-collection previews in a new location on the campus of Lincoln Center.
Gone are the tents at Bryant Park where hundreds of designers had launched runways since 1993. Instead, an estimated 100,000 buyers, editors, stylists and celebrities will visit the new home of Mercedes-Benz Fashion Week.
While most shows will still be in tents, located just southwest the landmark fountain that usually welcomes opera and ballet lovers, the facilities (and the faux marble facade) have a feeling of permanence.
It was time for fashion to take its place at a New York institution of fine arts, said Stephanie Winston Wolkoff, a former Vogue employee who now is serving as Lincoln Center's liaison to this new community. "Fashion designers are truly creative people. It's not just a business when it comes to these collections," she said.
Mayor Michael Bloomberg visited the site on Wednesday, taking the newly christened No. 1 "Fashion Line" subway there. The new name is temporary, lasting only through the eight days of fashion shows from designers such as Diane von Furstenberg, Zac Posen, Tommy Hilfiger, Carolina Herrera and Vera Wang. Gwen Stefani's LAMB collection will serve as the finale.
"Project Runway" and one of its alumni, Christian Siriano, were the marquee shows on opening day.
New York Fashion Week, which extends into other neighborhoods, "creates major excitement that ripples through the city," Bloomberg said. He noted that fashion is responsible for 175,000 jobs in New York, and that the two fashion-show seasons have a US$750 million impact on the local economy.
Bloomberg then reported that he bought his tie at Hermes, shirt at Paul Stuart and underwear at Bloomingdale's.
PROJECT RUNWAY
Jessica Simpson took her seat as guest judge at Thursday's "Project Runway" show at New York Fashion Week in a super-short, sparkly silver minidress, but she had nothing on the models, who wore an extraordinary number of hot pants.
Ten aspiring designers showed their collections to Simpson, Heidi Klum, Michael Kors and Nina Garcia, although several knew they already didn't make the cut and won't be the Season 8 winner. Extra designers needed to participate to keep secret the winners and losers of episodes that haven't yet aired on Lifetime.
Opening the show, Klum, wearing a bright red menswear-style pantsuit and blouse, said she was particularly fond of this group. "I have never gotten so emotional or attached to the designers."
She promised the audience, which included singer Jordin Sparks and designer Betsey Johnson, that they'd see color and fantasy on the catwalk. The crowd also saw an uneven mix of runway-ready, masterful looks and gimmicky ones _ especially those micro mini shorts that don't typically garner the best reviews when top-tier designers bring them back.
RICHARD CHAI
Richard Chai was feeling the vibe of Lincoln Center, turning out a spring collection for his Love label that mimicked styles favored by professional dancers and the students at the Juilliard School.
Layers, hardly new as a trend, were tweaked and freshened with sheer, sand-colored underpinnings, ribbed cummerbunds and soft, silky running shorts with contrast piping. The silhouettes were loose and flowy, but decidedly feminine thanks to the soothing neutral palette and strategic draping. In his notes left for the stylists, editors and retailers, Chai quoted Martha Graham: "All that is important is this one moment in movement. Make the moment important, vital and worth living. Do not let it slip away unnoticed and unused."
Loose leggings were worn under shorts and dresses as the new take on tights, and a silk-poly-metal fabric blend used for jackets and a pair of chic trousers was stiff yet slouchy. Chai also brought back the wide-leg palazzo pant, an easy choice for a warm-weather vacation, often pairing it with an appropriately crinkled jacket or gathered top.
This could be a further evolution of the trouser trend that has taken hold among the fashion-forward set for fall.
VENA CAVA
The Vena Cava girls took a tour through the '80s with inspiration from Memphis, an Italian design movement dating back to the 1980s known for bold colors and geometric shapes. Designers Lisa Mayock and Sophie Buhai showed a collection heavy on black, red, aquamarine green, rust and bright yellow. Beige culottes were paired with a black zip-up jacket. Netting was used on the back of a beige romper and on a cream cotton dress, tied with a rope belt and worn under a beige blazer.
"They are almost like disco silhouettes, some of them. They're clothes that you could just dance all night in, that you feel totally comfortable doing anything in," said Mayock.