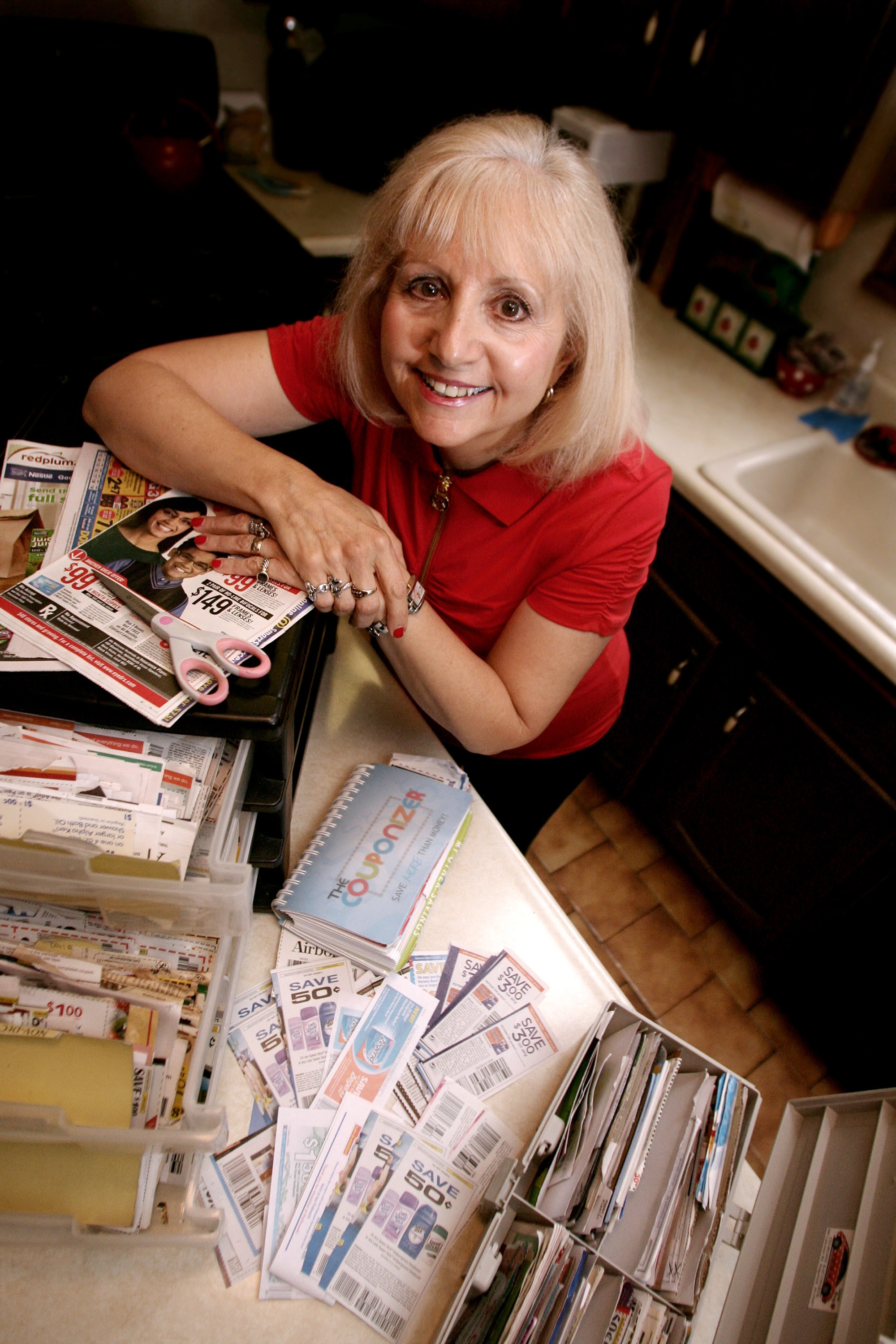 Georgine Kaczmarek doesn't mind being called the diva of discounts or the coupon queen.
After all, the Ridgefield, N.J., resident knows more about saving a buck than many shoppers. Saving money is a source of pride for Kaczmarek, who says it's "in" to be a coupon clipper who takes advantage of rebates and refunds. And what used to be called being cheap is really being smart.
"I was a closet couponer when it wasn't popular," said Kaczmarek, 62. "I'd been cutting coupons for years ... no one knew I was doing any of this."
But with today's fragile economy forcing more people to pinch pennies, Kaczmarek's tried-and-true measures are worth noting.
Her trips to the supermarket sometimes elicit groans of impatience from cashiers and shoppers behind her on line. But she doesn't mind. With her organized book of coupons on every trip, Kaczmarek walks into the market knowing she'll save a bundle.
"A really good day is 70 percent (savings)," says the married mother of grown boys Greg, 40, and Grant, 37, who also are savvy shoppers.
Last year, Kaczmarek saved more than $140 in one trip by using coupons and taking advantage of store offers at a Fairview, N.J., supermarket. The bill before coupons: $144.45. After the multiple discounts, she paid a mere $3.33.
Kaczmarek got hooked on reading labels early in life.
"When I was an infant, my mother had groceries delivered, and while she was paying at the door, I'd be taking all the labels off the cans," she said.
A graduate of Ridgefield Memorial High School, Kaczmarek studied apparel design at Fashion Institute of Technology in New York. By that time, she'd already had years of experience in the field of redemption _ namely trading stamps and box tops.
At an early age, she'd encouraged her parents, Marie and George Savelli, to buy cans of a name-brand instant coffee so she could redeem three inner labels for a gift. Her first. A toaster.
"I can still remember it," Kaczmarek said. "Mom bought the coffee."
An article by Helen Help Us! syndicated columnist Helen Bottel more than 40 years ago taught Kaczmarek how to get her name on a mailing list for published offers.
These days, Kaczmarek continues to buy newspapers for the coupons and inserts and taps into numerous Internet sites for special offers and rebates. Some offers require the mail-in combination of receipts and numeric barcodes, something that did not exist years ago, she said.
Being "found out" by friends was a blessing in a way, Kaczmarek said. Pals started helping her collect coupons and products that offered special deals.
"People started writing about what I did," she said. "Then I realized it was nothing to be embarrassed about. I went to refunding conventions ... where you trade and swap. Coupons today are fashionable. It's the smart thing to do."
Gone is the stigma of being stingy, and "fashionable" is handing over your drug store or supermarket saver or rewards card.
"I was ashamed back then, but I'd never buy anything that doesn't have a coupon or rebate," she said. "I'm on more than 100 e-mail lists and set up a separate e-mail for coupons, rebates or stores so I can control it. The (newspaper) preprints on Saturday are great. I'll know what's on sale ahead of time from the circulars."
Kaczmarek offers novices a bundle of tips, such as don't be brand-loyal, combine sale items with coupons and rebates and hold onto receipts that may be required for mail-in offers
"Usually my bill is cut in half at the supermarkets _ and that's on a bad day," she said.
Most importantly, be organized, she said.
"No one likes people fumbling coupons," especially on line at the market, she said.
Kaczmarek keeps a master box at home to hold coupons from cosmetics to canned goods. She carries a smaller box to retail stores and supermarkets.
"When people say to me that they don't use coupons, I just say to them that if they see a dollar bill, would you pick it up off the floor? You bet."
Kaczmarek calls shopping an adventure, not a chore.
"It's the thrill of the hunt," she said. "You may save enough money for a little vacation, more food, gifts, entertainment or a luxury item."
If you see Kaczmarek or her husband, Walter, at the store, it's wise not to be too huffy. She often carries her "couponizer" and may just turn around and offer you a coupon for something free. She donates some items to food pantries if she's overstocked, and much of how you can save is on her website georginesaves.com.
"I tell people if they're on line behind me that I have a lot of coupons and find another aisle ... or I give them coupons so they can get money off, too," she said. "That always makes people smile and a little more patient."