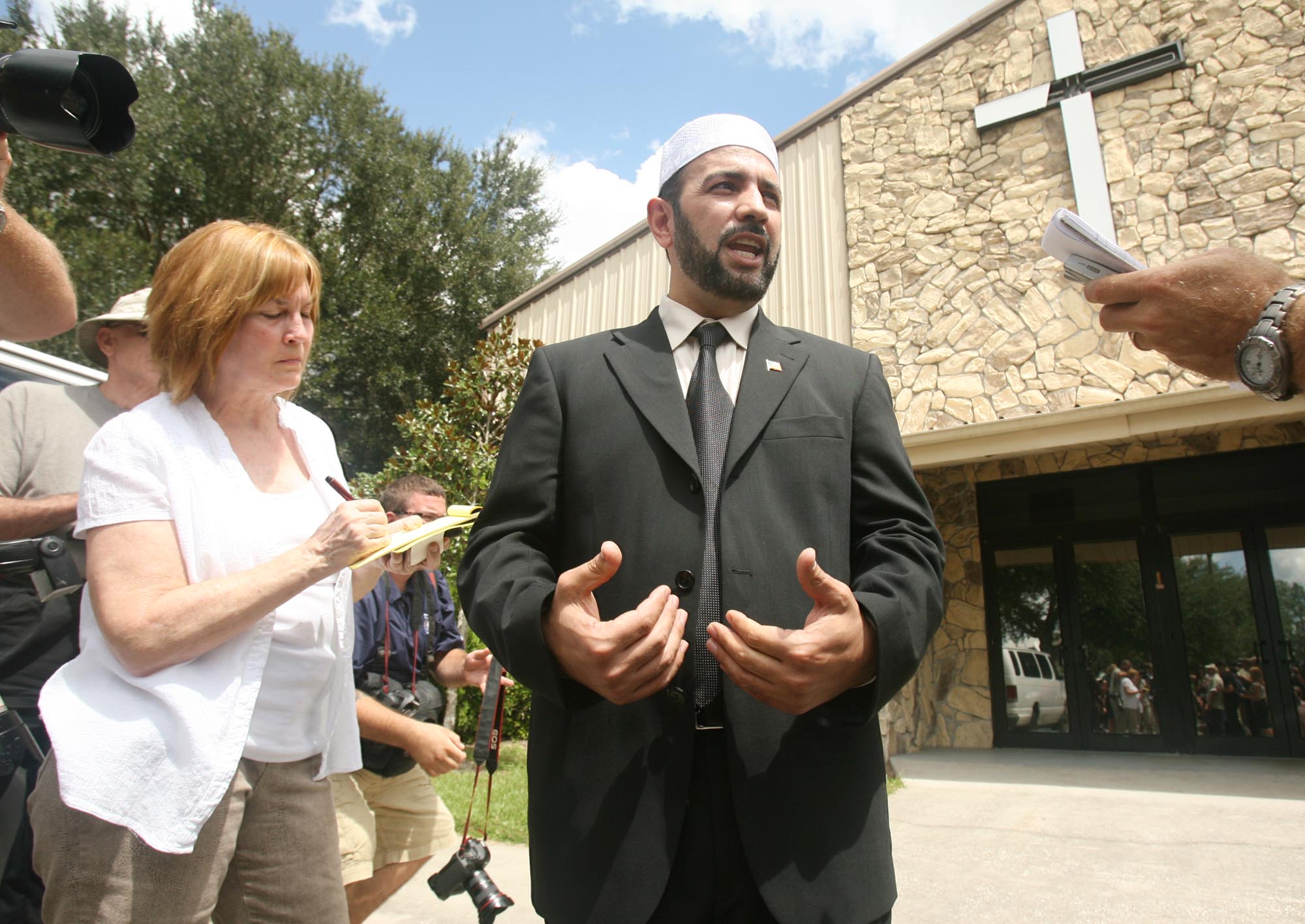 A spate of anti-Muslim attacks is arousing fears that a vitriolic debate over Islam in America is spinning out of control as the U.S. marks the ninth anniversary of the Sept. 11 attacks.
While statistics confirming a trend toward violence are elusive, analysts, religious leaders, and Muslim community activists say anti-Muslim sentiment has reached a pitch not seen since Al-Qaeda hijackers killed nearly 3,000 people in the deadliest attack on U.S. soil.
"What we're seeing is a tremendous wave of anti-Muslim rhetoric in our society, which has resulted in a number of hate incidents targeting mosques and Muslims around the country," said Ibrahim Hooper, communications director of the Council on American-Islamic Relations.
An angry debate over plans for a mosque near where the World Trade Center once stood appears to have fueled the resentment, which now shows no sign of abating.
The pastor of a small Christian church in Florida has threatened to carry it to a whole new level by holding a Koran-burning ceremony on the 9/11 anniversary, drawing sharp warnings that it would put U.S. troops at risk.
High unemployment, a rocky economy, anti-immigrant sentiment, and political opportunism as mid-term elections approach also are thought to play a role.
"Anecdotally, there is very little question we are seeing a real backlash in terms of anti-Muslim hate crimes and anti-Muslim speech in general," said Mark Potok, an analyst with the Southern Poverty Law Center.
Potok traces the start of the current wave of attacks to an incident in May when a man exploded a pipe bomb during prayers at an Islamic center in Jacksonville, Florida.
Since then, there have been incidents of vandalism and attempted arson at a mosque in Arlington, Texas; threats to a mosque near Fresno, California; and suspected arson at a construction site for a mosque at Murfreesboro, Tennessee.
In New York, a Muslim cab driver was stabbed by a man who allegedly joked about Ramadan before striking, and in Seattle, Washington, a Sikh convenience store clerk was assaulted by a man who yelled "You're Al-Qaeda. Go back to your country."
While the scale of the attacks have been small, they have spread fear in Muslim communities, their leaders say.
Celebrations on Eid al-Fitr, which marks the end of Ramadan and this year coincides with the Sept. 11 anniversary, are being toned down in some Muslim communities worried about the anti-Islamic mood.
"I think our communities all around are bracing themselves," said Alejandro Beutel, of the Muslim Public Affairs Council.
Alarmed by the turn of events, a group of Christian, Jewish and Muslim religious leaders pressed Attorney General Eric Holder Tuesday to send a clear message that anti-Muslim attacks will be aggressively pursued.
"I have heard many Muslim Americans say they have never felt this anxious or this insecure in America since directly after Sept. 11," said Ingrid Mattson, head of the Islamic Society of North America.
"They're nervous about their children as they head back to school this week," she said.
Oddly, the cluster of anti-Muslim incidents comes after years in which few such incidents were reported.
FBI statistics show a spurt in 2001 when 481 incidents against Muslims were reported by U.S. law enforcement agencies, but then they dropped sharply and remained at a low level through 2008, the last year on record.
Some observers credit former president George W. Bush who came out immediately after Sept. 11 and declared that Muslims were not the enemy.
Many analysts even considered the U.S.' seeming success in shielding its Muslim communities while at war at a time when deep inter-communal divisions were opening in Europe.
"Anti-Muslim hate crime had really dropped off our radar. The situation seemed vastly better in the years since 9/11 and it just did not seem like a major trend," said Potok.
And then, seemingly out of nowhere, came the controversy over the Islamic center in lower Manhattan. Polls showed Americans were seeing their Muslim neighbors in a more negative light. Time magazine asked: "Is America Islamophobic?"
"There is no reason for this to be as volatile as it is," said Reverend Welton Gaddy, president of The Interfaith Alliance. "Someone is stoking the flames."
Sensing opportunity or trouble, politicians either plunged in or steered clear of the debate. Newt Gingrich, a prominent Republican, compared the New York mosque to a Nazi sign next to the Holocaust Museum.
President Barack Obama first affirmed Muslims' freedom to build the mosque, then said he was not commenting on the "wisdom" of building it.
"Political leadership is really important at these moments, and we have seen essentially the failure of the political class," said Potok.
New York Mayor Michael Bloomberg predicted the storm would be over after the Nov. 3 elections.
"I think a lot of people are just using this as a political rallying point," he was quoted as saying Tuesday. "I find it disgraceful."
Jim Mannion is an Agence France-Presse writer.