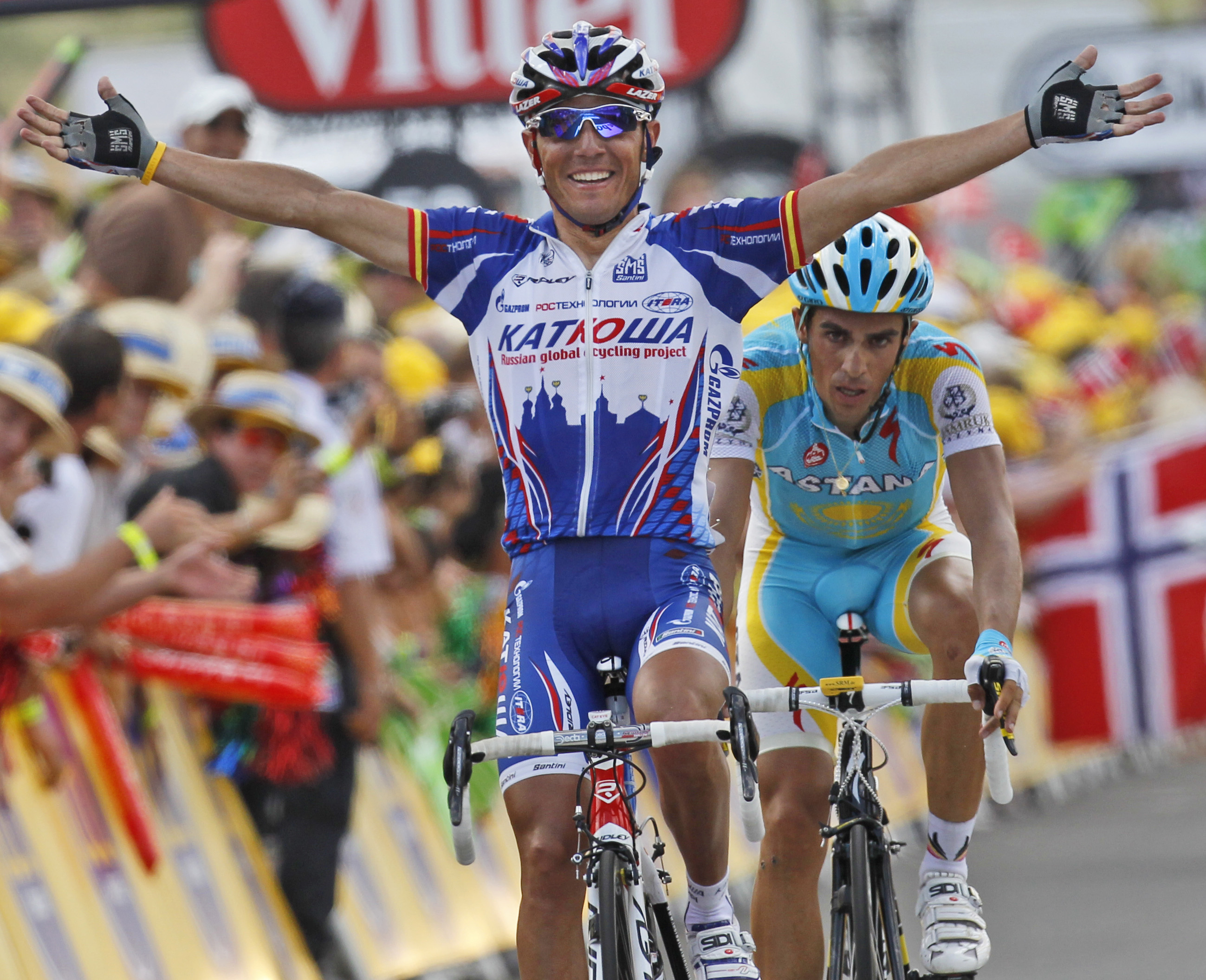 Alberto Contador fired a warning shot at yellow jersey rival Andy Schleck on Friday with a daring attack that allowed him to steal precious seconds off the Tour de France race leader.
Defending champion Contador went into the 210.5km stage from Bourg-Peage to Mende, where the finish was one kilometer after the punishing 3.1km 'Jalabert' climb, with a 41sec deficit to the Saxo Bank team leader.
But a quick glance at Schleck less than halfway up told the Spaniard he had to take his chance - although what looked like a promising attack allowed him to steal only 10sec off his main rival.
Contador came into the home straight on the runway of Mende aerodrome with fellow Spaniard Joaquin Rodriguez for company after he had attacked before Contador on the final climb.
In the end Rodriguez's superior sprint allowed him to hand Katusha their maiden win on this year's race, with Schleck finishing among a small group 10sec later to limit the damage.
"I came here to look at the stage before the Tour and liked the look of it, although I knew it would be pretty hard," said Rodriguez, whose maiden win on his race debut allowed him to move up one place to eighth overall at 4:58 behind Schleck.
"But when Contador came across to me I knew I could resist his attack."
Contador knows the big battle for the yellow jersey will be played out over four punishing days in the Pyrenees beginning on Sunday.
But the Astana team leader claimed a small victory over Schleck that he says has left him confident for the challenge ahead.
"It's an important psychological blow. It's good to see your body responding like that after 210km of racing," said Contador.
"I'm very pleased about this looking to the Pyrenees, especially the sensations in the legs. The next thing is to recover in time for Sunday."
Schleck admitted, however, that he had expected to lose time on the 'Jalabert' climb, which is too short and steep for his climbing endurance talents.
"To be honest I suffered a bit today," said Schleck, who finished fifth on the stage and now leads Contador by 31sec.
"It was a hard day and I wasn't looking forward to this climb. It's short and you have to be explosive - not my type at all.
"But I'm happy. I lost only 10sec in the end."
Third place went to Contador's Kazakh team-mate Alexandre Vinokourouv, a survivor of a breakaway that started after 60km.
Vinokourov's presence in an earlier breakaway allowed Astana the crucial luxury of not having to participate in the chase over the rolling, rugged terrain of the Ardeche.
"It was our main objective, so we didn't have to put riders into the chase," said Vinokourov, who finished third on the stage to move up to 12th overall at 6:25.