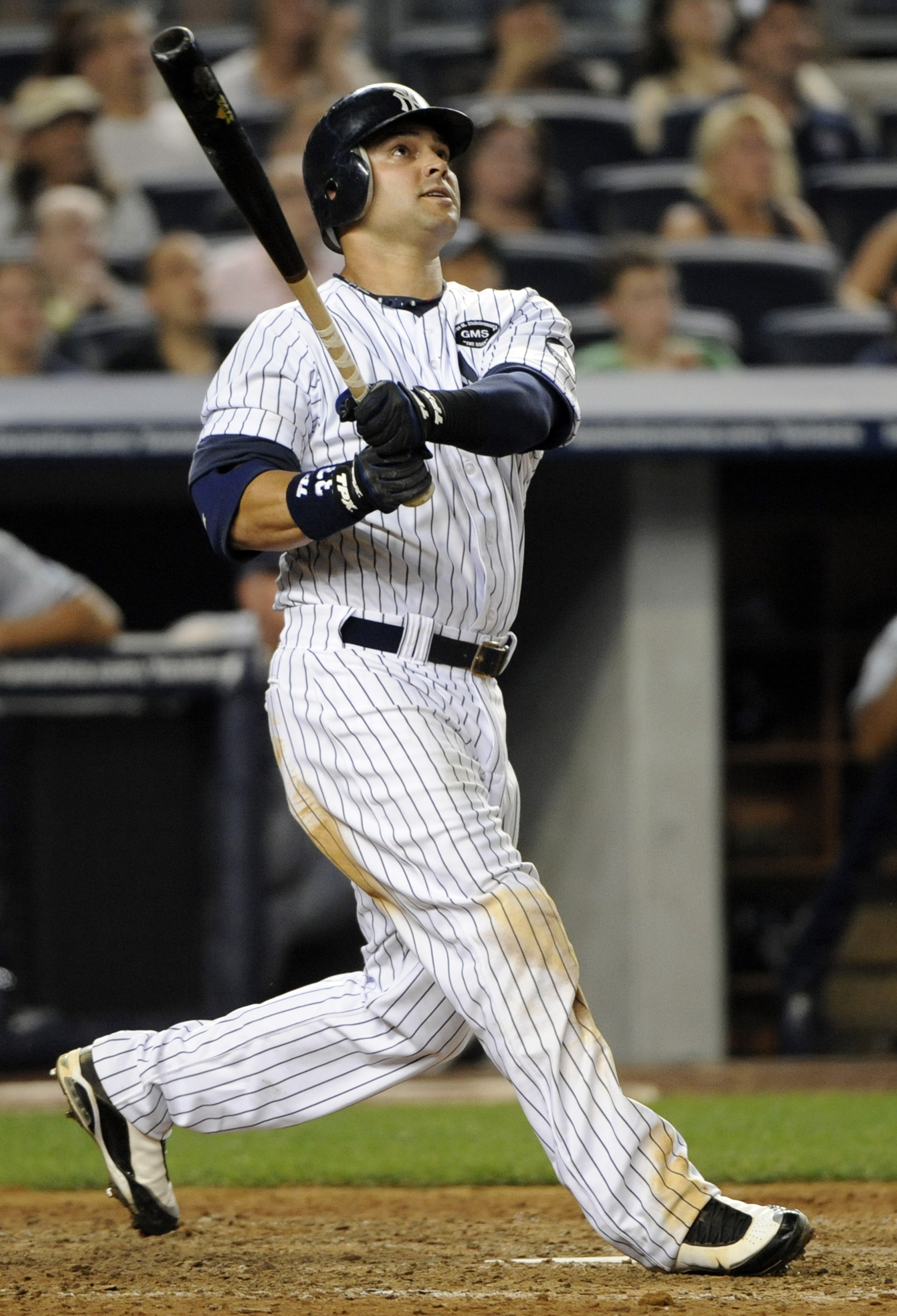 Nick Swisher's game-winning single with two outs in the ninth inning gave New York a 5-4 win over the Tampa Bay Rays on Friday and capped an emotional night that saw the Yankees pay tribute to late owner George Steinbrenner and former public address announcer Bob Sheppard.
Swisher hit a tying home run in the eighth, then lined a single that sent Curtis Granderson sliding home for the victory in a matchup of the teams with the best records in baseball. The Yankees streamed from the dugout to celebrate, and Swisher wound up way out in right field, surrounded by jumping teammates.
The joyful ending was in sharp contrast to earlier events that honored Steinbrenner, who died Tuesday, two days after the passing of Sheppard.
A 15-minute pregame tribute included a 2-minute moment of absolute silence. Not a single fan shouted out, and the only sounds were the flags flapping at half-staff and a passing subway train.
Granderson opened the bottom of the ninth with a single against Randy Choate (2-3). Ramiro Pena sacrificed, Brett Gardner walked and Derek Jeter struck out. Swisher lined a single and Granderson beat right fielder Gabe Kapler's throw.
Robinson Cano and Jorge Posada hit consecutive home runs off James Shields in the sixth to tie it at 3.
Rangers 8, Red Sox 4
At Boston, Bengie Molina hit for the cycle with a grand slam and triple in his last two at-bats as Texas came up with another big inning in a victory over Boston.
Molina's slam came in a five-run fifth inning and gave Texas a 7-3 lead. One night earlier, he capped a six-run first inning with a two-run homer and the Rangers went on to a 7-2 win.
The slow-footed catcher, obtained from San Francisco on July 1 to shore up a team weakness, lumbered into third base with a leadoff drive over the head of center fielder Eric Patterson and smiled at teammates in the dugout. A few pitches later, he left the game with tightness in his right quadriceps and was replaced by pinch-runner Joaquin Arias.
Arias scored the final run of the game on a sacrifice fly by Michael Young.
Molina is the fifth player in Rangers history to hit for the cycle and the first since Kinsler on April 15, 2009. The last visitor to hit for the cycle at Fenway Park was Cleveland's Andre Thornton on April 2, 1978.
The AL West-leading Rangers lost their last four games before the All-Star break but returned to take the first two of a four-game series against the Red Sox, who have lost seven of nine as injuries severely weakened their lineup.
In other games: Twins 7, White Sox 4; Angles 3, Mariners 2; Indians 8, Tigers 2; Blue Jays 4, Orioles 2; Athletics 5, Royals 1
National League
Stephen Strasburg struggled through a 34-pitch first inning but escaped early jams to lead the Washington Nationals past the Florida Marlins 4-0 on Friday night.
Strasburg (4-2) allowed two baserunners in each of the first three innings, walking three and throwing the first wild pitch of his career. He finished with seven strikeouts in six innings and lowered his ERA to 2.03. Two relievers completed a four-hitter.
The shutout was the third this season for the Nationals, thanks in part to Strasburg's first scoreless outing.
Making his eighth major league start and facing Florida for the first time, Strasburg was locked in a scoreless duel with Ricky Nolasco (9-7) until Josh Willingham hit a three-run double in the sixth.
In other games: Cardinals 8, Dodgers 4Reds 3, Rockies 2; Padres 12, Diamondbacks 1; Giants 1, Mets 0; Astros 5, Pirates 2; Cubs 4, Phillies 3; Brewers 9, Braves 3