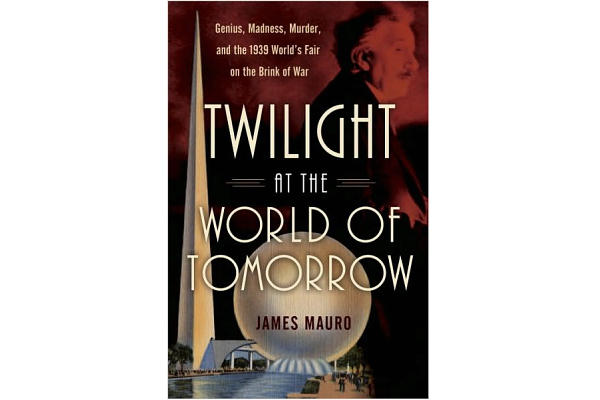 'Twilight at the World of Tomorrow: Genius, Madness, Murder and the 1939 World's Fair on the Brink of War
Written by: James Mauro
Published by: Ballantine Books
Reviewed by: Cam Martin, The Christian Science Monitor
Nowadays you'd be hard-pressed to find many people who recognize the name Grover Whalen, a once-famous man who served as New York's police commissioner during Prohibition and became "better known as the city's 'official greeter,' practically inventing the ticker tape parade for visiting celebrities, including Albert Einstein and Howard Hughes," writes James Mauro in Twilight at the World of Tomorrow: Genius, Madness, Murder, and the 1939 World's Fair on the Brink of War. "When Charles Lindbergh made his historic flight from New York to Paris in 1927, Grover Whalen was the last man to shake his hand before takeoff at the Roosevelt Field airstrip on Long Island and the first man to welcome him upon his return to the city."
Einstein, Hughes and Lindbergh are not lost to history. Whalen, on the other hand, is "[u]njustly a forgotten man now," Mauro writes. And while "Twilight at the World of Tomorrow" is concerned with a larger web of intricate, overlying threads - including Einstein's efforts to get the United States to develop nuclear weapons before the Nazis, and the political unrest at the Fair that reflected the growing war in Europe - the most indelible character is undoubtedly Whalen, a man once "recognized on the street by more persons than any other New Yorker except Al Smith, Babe Ruth, and Jack Dempsey."
Mauro, a former editor of Spy magazine and executive editor of Cosmopolitan, says in the acknowledgments that he wanted to do justice to this colorful, unabashed social climber who was known as "the best promotions man in the country" and served as president of the star-crossed 1939 exposition - "a US$160 million 'World of Tomorrow' built on twelve hundred acres of primeval bog. That it was constructed on a notorious garbage heap [the infamous ash heaps mentioned in 'The Great Gatsby' stood as a prime example of unintended irony and unbridled optimism for the future, despite the looming certainty of war."
Whalen was charged with selling this spectacle - to companies like General Electric, who'd be asked to exhibit without being allowed "to blatantly sell their product lines - a seemingly impossible task;" and to dictators like Josef Stalin and Benito Mussolini.
Over the phone, Whalen got Stalin to commit to a US$4 million pavilion. Later, following a voyage across the Atlantic to sell the Fair to other European powers, he had a face-to-face meeting with Mussolini.
"Whalen tried flattery. The theme of the World's Fair, he said, was "Building the World of Tomorrow," which he graciously compared with Mussolini's vision for Italy."
The strategy worked; Mussolini bought a pavilion for US$5 million.
Given anecdotes like this, it's easy to understand why Mauro considered using Whalen and the World's Fair material as the basis for a novel. But this story - which elicits easy comparisons to Erik Larson's "The Devil in the White City: Murder, Magic, and Madness at the Fair That Changed America," about the 1893 Chicago exposition - certainly doesn't suffer from its nonfiction treatment. The truth is engrossing enough without fictional flourishes.
In today's money, the Fair cost US$2.3 billion to create. Among the star attractions was General Motor's Futurama exhibit, a "thirty-six-thousand-square-foot scale model of an American landscape as [designer Norman Bel] Geddes imagined it would look in 1960.... The eighteen-minute ride simulated a flight of several hundred miles over mountains, countryside, industrial centers, farms, and half a dozen towns and cities."
This exhibit alone cost US$7 million - or approximately US$100 million in today's money.
"'The World of Tomorrow' must be eye-popping as well as educational, high-minded but not high-hat," as Mauro describes Whalen's vision. "And that meant keeping it affordable to the average Joe while at the same time presenting him with wonders beyond belief .... Americans would spend their dollars, Whalen knew, as long as they felt they were getting their money's worth."
The majority of people who patronized the Fair were indeed awestruck. Unfortunately, attendance during the 18-month exposition did not meet expectations. And a bombing near the British pavilion - a crime that killed two bomb squad detectives and remains unsolved - tainted the celebration. Soon Whalen's quaint vision of the future was displaced by harsh reality.