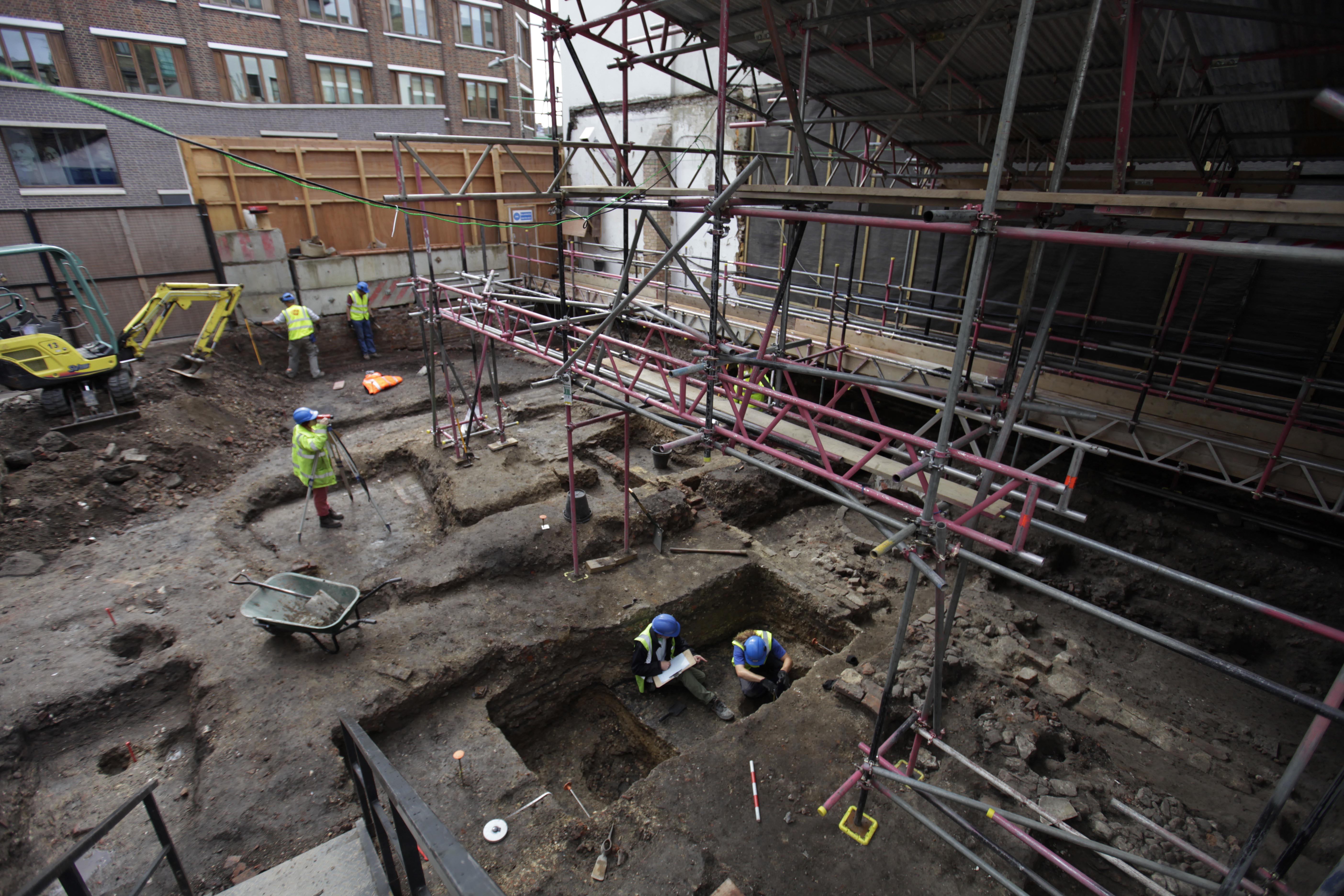 In the middle of London, a plot of earth is dug across with trenches and studded with old bricks. If the world of theater ever has hallowed ground, this is it.
It's the site of London's first long-standing theater, where William Shakespeare's plays were performed and where the Bard himself once trod the boards.
Archaeologists who have been digging here since 2008 have uncovered a section of outer wall and floor surface from the building, completed in 1576 and known simply as The Theatre - whose timbers were later used to build The Globe theater.
Now a London drama troupe plans to erect a new building on the site, bringing live performances back to the spot where Elizabethan drama flourished more than 400 years ago.
This week actor Paul McGann stood amid the dirt and bricks and recited the prologue to "Romeo and Juliet" - a play historians believe had its premiere on this site and in which Shakespeare may have taken a small acting role.
"It's possible the prologue was spoken by Shakespeare himself," McGann said. "I hope so. I want to channel him."
For theater fans - and especially for actors - this spot is special.
Shakespeare's influence on English culture is incalculable, but relatively few physical links to him remain. Tourists can visit his birth and burial places in the town of Stratford-upon-Avon. In London, there's a reconstruction of the Globe playhouse where he worked near its original site south of the River Thames. Remains have been found nearby of The Rose, another Elizabethan venue.
Nowhere else but at The Theater, however, can actors stand exactly where their Elizabethan predecessors once stood.
"Extraordinary," said actor Susannah Harker, who performed parts of "A Midsummer Night's Dream" alongside McGann at the site on Thursday. "To some people it might look like a bit of old brick, but to me it stimulates the actor's imagination."
The remains of The Theatre were discovered underneath a Victorian warehouse, which unlike many similar buildings had no basement. That meant the layers below had been preserved.
The Tower Theatre Company, an 80-year-old amateur troupe that has been searching for a permanent home, bought the site a few years ago and asked Museum of London archaeologists to have a look.
"We thought we'd better find out whether there was anything under there that would stop us building," said Penny Tuerk, chair of the troupe's trustees. "And they came back and said, 'Actually, we've found a bit of Tudor brickwork.' We got tremendously excited at that point."
The bricks were the remains of a curved wall, indicating a polygonal building, a common style for Elizabethan theaters. Beside that was a patch of hard-pressed gravel, part of the area where the "groundlings" - theatergoers holding cheap standing-room-only tickets - crowded together to watch plays.
Even older remains have been found, identified as part of a brewhouse from a medieval priory that once stood on the site. The archaeologists believe it was still functioning in Elizabethan times, serving beer to thirsty theatergoers.
They have also dug up drinking vessels and pottery shards, including a piece of 16th-century jug decorated with the face of an Elizabethan gentleman, distinctive in his ruff and pointy beard.
The site lies behind white boards on a side street in Shoreditch, a scruffy area of bars and clubs east of London's business district. In Elizabethan times it lay outside the city walls - free from regulation by city leaders hostile to theaters and other disreputable entertainments.
"It was called the suburb of sin," said Museum of London archaeologist Heather Knight. "It has always been the area of entertainment and fun."
The Theater was London's first successful playhouse - previously, plays had been staged in inn yards and other makeshift spaces. There is evidence that an earlier venue, The Red Lion, was built outside the city in the 1560s but lasted only a few months.
It's thought plays including "Romeo and Juliet" and "The Merchant of Venice" - as well as works by Christopher Marlowe and Thomas Kyd - were performed at The Theatre, which served as a base for Shakespeare's troupe, the Chamberlain's Men.
But by 1598, a dispute with the site's landlord threatened to leave the company homeless. Shakespeare and his colleagues took drastic action: over the Christmas holiday, while the landlord was away, they dismantled the building and hauled its stout oak beans into storage. In the spring, the timbers were ferried across the river and used to build a new theater, the Globe.