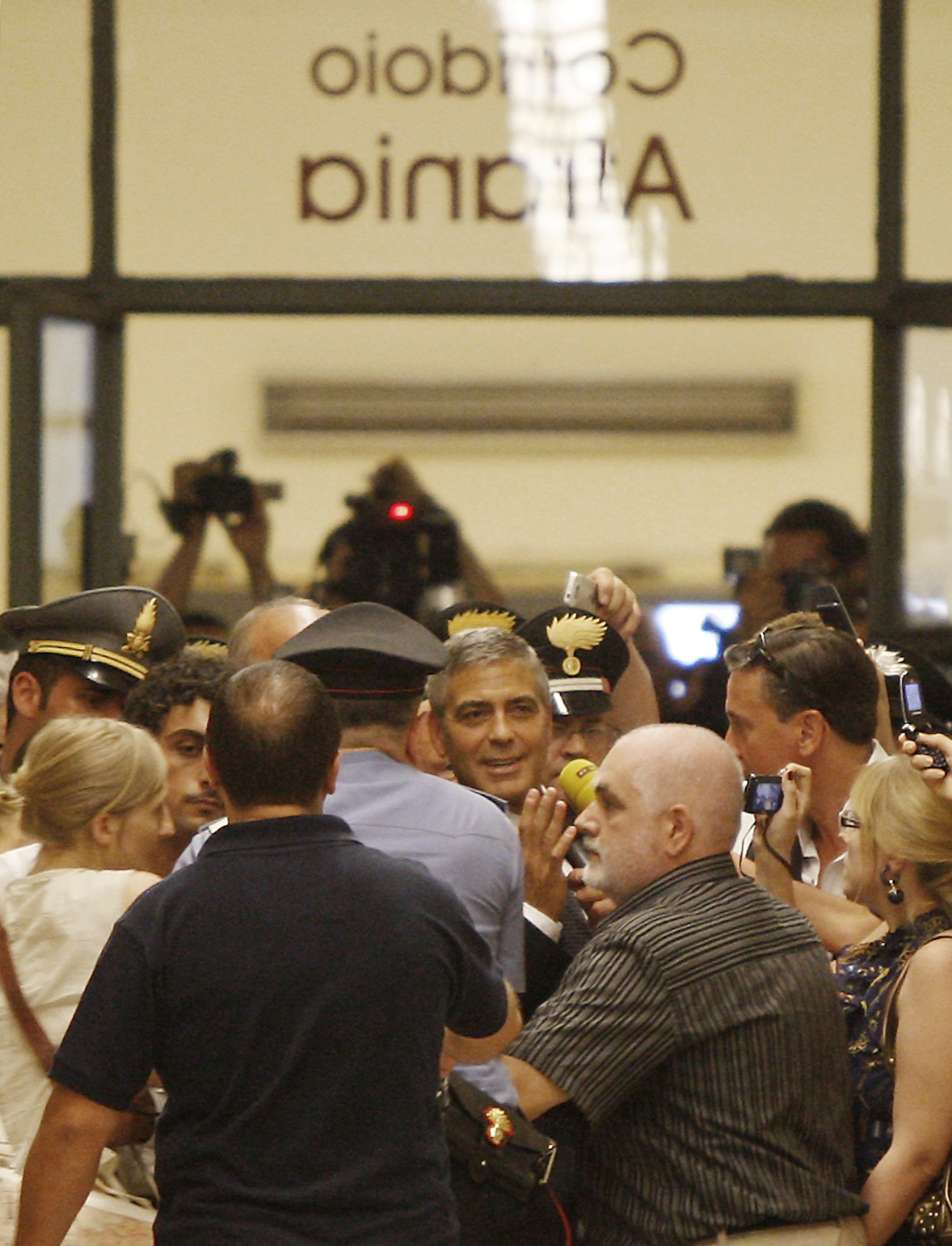 It's no wonder the Italian businessmen claimed George Clooney was behind their fashion line - the actor knows how to wow an audience whether he's on the red carpet or the witness stand.
Maintaining his trademark aura of cool, Clooney delivered a few wisecracks Friday as he testified against three defendants accused of co-opting his name with the goal of launching a fashion line.
The appearance of the star, who maintains a villa on nearby Lake Como but is rarely seen here in public, sent the normally staid courthouse into full celebrity tilt. Clooney had to push his way through a wall of cameras into the courtroom, saying "scusa, scusa," - "Excuse me" in Italian - and warning "Don't crush my lawyers."
Throngs of fans packed the tiny courtroom. The judge repeatedly told spectators to be quiet and tossed out one woman who snapped a photo of Clooney.
The 49-year-old actor wore a navy blue suit, crisp white shirt and red-spotted blue tie as he addressed the court through an interpreter, throwing in occasional words in Italian and apologizing for his lack of fluency.
He testified that photos that purported to show him with two of the defendants were doctored and signatures on documents also were forged.
Only one defendant - Vincenzo Cannalire - attended the trial.
Clooney turned to greet him after recognizing the man from of the photos he was looking at.
"This is the first time I've ever seen him," Clooney said, motioning to the defendant. Then with just a trace of irony, Clooney added, "So I'd like to say hello, nice to meet you."
Two others also charged with criminal fraud in the case are Vanja Goffi and Francesco Galdelli.
Clooney said one photo purporting to show him with Goffi was instead doctored from a photo of Clooney and an ex-girlfriend in real life.
The actor said he had never met Goffi but knew of her from stories on the Internet that claimed the two had a romantic relationship.
"Of course, I have seen her for the last three years in every single interview story nearly every day," Clooney said with a hint of annoyance. The actor said the woman had even moved to the town in Italy where he spends about two months a year, but added: "I've never met her. I've never seen her."
Examining other photos, Clooney explained why he was not the man in one particular picture.
"Here, for instance. I don't smoke and I don't wear that watch," Clooney said. Then after a pause he added, "I also don't wear long jean shorts."
The signatures on the many documents he examined either were forged or photo copies of his signature, Clooney said, at one point acknowledging "this is my signature, but I didn't sign it."
"My signature is very easy to get, as you can imagine, off the Internet, off eBay," Clooney testified. "You would think if you were going to forge my signature, you would borrow several different versions of it."
The actor noted that just two versions of the photocopied signature were used.
Defense lawyers attempted to dig into the actor's private life but were blocked by the judge. Clooney appeared irritated when the defense questioned him about who cares for his Harley Davidson motorcycles and his Italian home.
One lawyer asked if Clooney saw a lot of women or dated many Italian women since acquiring a residence in Italy nine years ago. The judge ruled the questions "irrelevant and not admissible."
Clooney has a well-documented relationship with Italian actress Elisabetta Canalis.
Clooney testified that the case dated to 2006, when he received a letter from Rolex telling him to stop wearing one of their watches in public. "I didn't know what was going on," said Clooney, who is a spokesman for Omega. He added that he realized that someone was using his image to sell Rolex watches.
Later, the actor and his employees noticed articles saying that he had put out a clothing line in Italy, which he said was not true. Clooney then hired Italian lawyers to resolve the situation.
After his 90-minute testimony, Judge Pietro Caccialanza thanked Clooney, wryly noting that the session "has lasted as long as a movie."
Clooney was flanked by carabinieri military police as he left the courtroom.