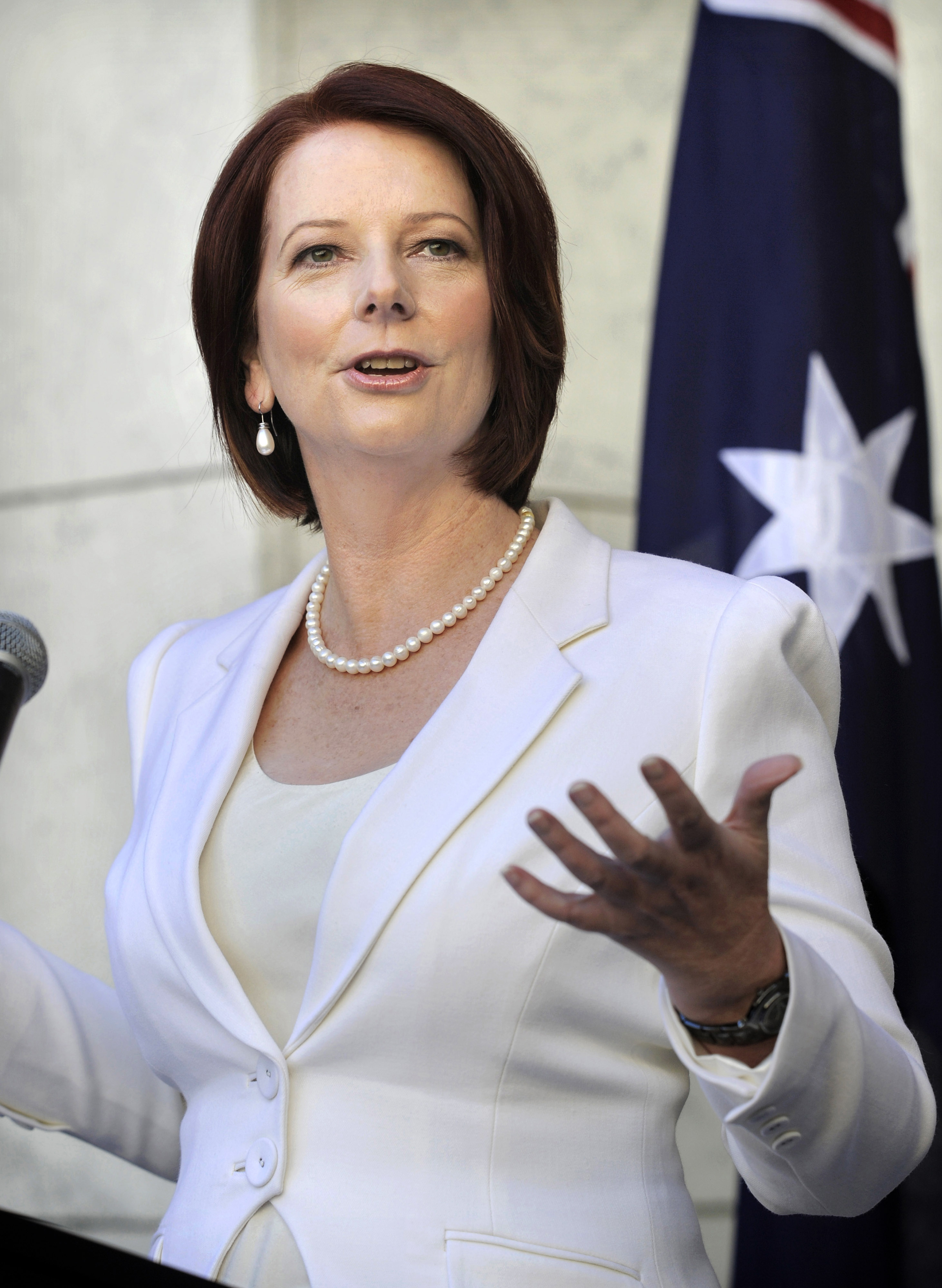 Australia's first female Prime Minister Julia Gillard will attempt to win a second term for her center-left government at Aug. 21 elections, with battle lines drawn on climate change, asylum seekers, and record-high public debt.
Buoyed by opinion polls endorsing her new leadership, Gillard called the election yesterday only three weeks after grabbing power in a surprise ruling Labor Party coup. She said the government had "lost its way" under her predecessor, Kevin Rudd, and has attempted to steer new courses in key policy areas.
"We would go into our second term with some lessons learnt," Gillard told reporters at Parliament House. "We would be able to implement and deliver programs differently than we have in the past."
Opinion polls point to Labor winning a second three-year term, but analysts expect a tight contest against a resurgent conservative opposition Liberal Party led by Tony Abbott.
Gillard, a 48-year-old Welsh-born agnostic, was once considered too far left to successfully win over the political middle ground essential to an Australian election victory. Abbott, a 52-year-old former seminarian, was viewed as too far right.
Both have shifted their parties' directions but maintain bipartisan support for major foreign policy issues, including Australia's deployment of 1,550 troops to Afghanistan.
Gillard broke a bitter deadlock between Rudd and major mining companies over a proposed 40 percent tax on mineral profits, hammering out a deal on a compromise tax of 30 percent. The tax is expected to raise 10.5 billion Australian dollars (US$9.3 billion) in two years.
Abbott, who in December became his Liberal Party's third leader in two years, has vowed to oppose the tax.
Gillard has attempted to stem a surge in asylum seekers trying to reach Australia by boat by asking its tiny neighbor East Timor to host a U.N.-endorsed regional refugee processing hub.
Labor has condemned a Liberal plan to deter asylum seekers by introducing temporary protection visas, which would enable the government to send refugees back to their homelands if conditions there improved.
The election issue is key with more than 4,000 asylum seekers having arrived in Australia by boat in the past year.
Gillard was deputy to Rudd, who became a Labor hero when he led the party to a crushing election victory in November 2007 after 11 years in opposition.
He remained one of the most popular prime ministers in modern Australian history until he made a series of unpopular political moves earlier this year, including shelving a key pledge to make major industries pay for the carbon gas they emit.
While Rudd went to the 2007 election declaring climate change the "greatest moral challenge of our time," Gillard has yet to announce a new Labor policy on reducing Australia's carbon gas emissions, which are among the world's highest per capita.