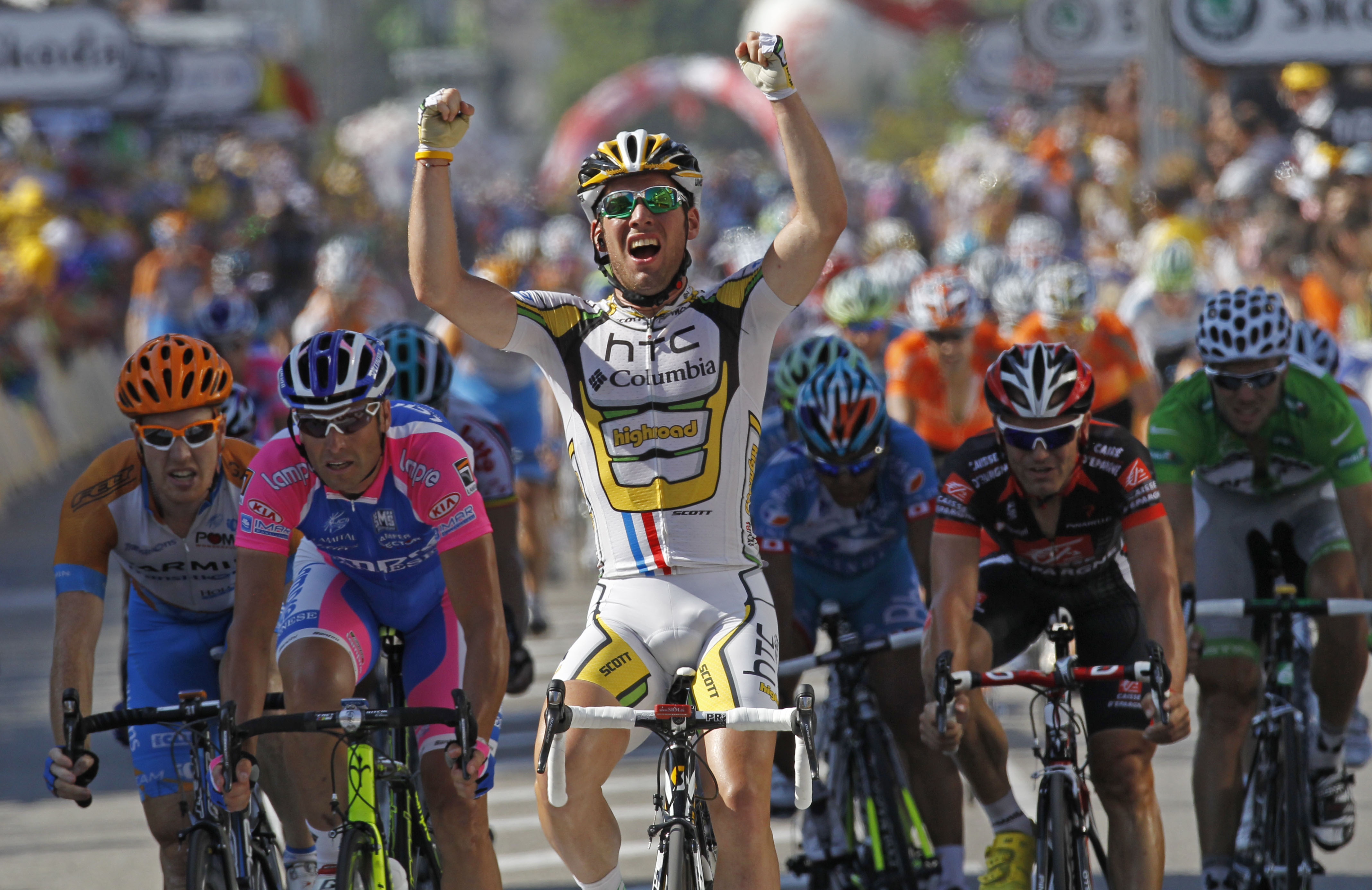 Britain's Mark Cavendish dominated a controversial bunch sprint on the 11th stage of the Tour de France on Thursday that led to the disqualification of his team-mate Mark Renshaw.
Luxembourg's Andy Schleck, of Saxo Bank, retained the yellow jersey with his lead of 41sec on Spain's Alberto Contador intact after a 184.5km race between Sisteron and here.
Cavendish, the winner of six stages in 2009 and four in 2008, has now won three stages in this year's race, taking his career tally to an impressive 13.
In doing so, the Isle of Man sprinter surpasses the 12-stage victory tally of several notable sprinters including German great Erik Zabel, Italian Mario Cipollini and Australian Robbie McEwen.
Cavendish's 13th victory in the race, however, will be remembered as an unlucky one for his team.
As HTC-Columbia wound up the speed inside the final kilometer in a bid to drop rivals and deliver Cavendish to the 200 meters to go mark, his lead-out man Renshaw tried to head-butt New Zealander Julian Dean three times.
Australian Renshaw is considered one of the world's best lead-out men, whose job is to crank up the pace in the final kilometer of the race and fend off rivals before the sprinter launches his final drive for the line.
But even that status did not save him from race officials, who quickly took action.
Top race official Jean-Francois Pescheux said: "Renshaw was declassified immediately but we have decided to also throw him off the race.
"We've only seen the pictures once, but his actions are plain for all to see. They were blatant.
"This is a bike race, not a gladiator's arena. Everyone could have crashed today."
Tyler Farrar, whose Garmin-Transitions team promised to challenge Cavendish's domination prior to the stage, had tried to sneak up the barriers on the inside of Cavendish only to have Renshaw then veer to the left to block him.
The American said HTC-Columbia's win-at-all-costs tactics were simply uncalled for.
"Everything was going great. I was on Julian's wheel and he took me up to Cavendish's wheel with 300 meters to go," said Farrar.
"When Cavendish launched his sprint, Renshaw veered to the left and I had to put my hand on his back to steady myself.
"They just don't need to race like that."
Farrar admitted Cavendish's sprint was clean, but said he was more concerned about safety issues resulting from Renshaw's tactics.
He added: "Of course I'm upset. I wanted to win, but more than anything I didn't want to crash. They're playing with the security of the riders there."
Upon learning of Renshaw's exclusion from the race, Cavendish admitted he was "sad."
However the Briton, who came under scrutiny at the Tour of Switzerland when he left his sprint line, causing a mass pile-up which led to injuries for several riders, said he did not "necessarily agree with the decision."
"Commissaires have made a decision that we don't necessarily agree with," he said.
Asked if that meant he agreed with headbutting tactics during the race, Cavendish added: "I did not say I disagreed with the decision of the commissaires."
Cavendish's win, meanwhile, means he is back in the race for the points competition's green jersey, which is now being worn by Italian Alessandro Petacchi after he dispossessed 2009 winner Thor Hushovd.
Unlike Farrar, Petacchi managed to stick to Cavendish's wheel but could not overtake the Manxman.
The Lampre rider leads the green jersey race on 161pts, with Cervelo's Hushovd second on 157, Australian Robbie McEwen on 138 and Cavendish on 132.
Friday's 12th stage is held over a rolling 210.5km from Bourg-Peage to Mende and finishes on the steep, 3km 'Jalabert' climb.