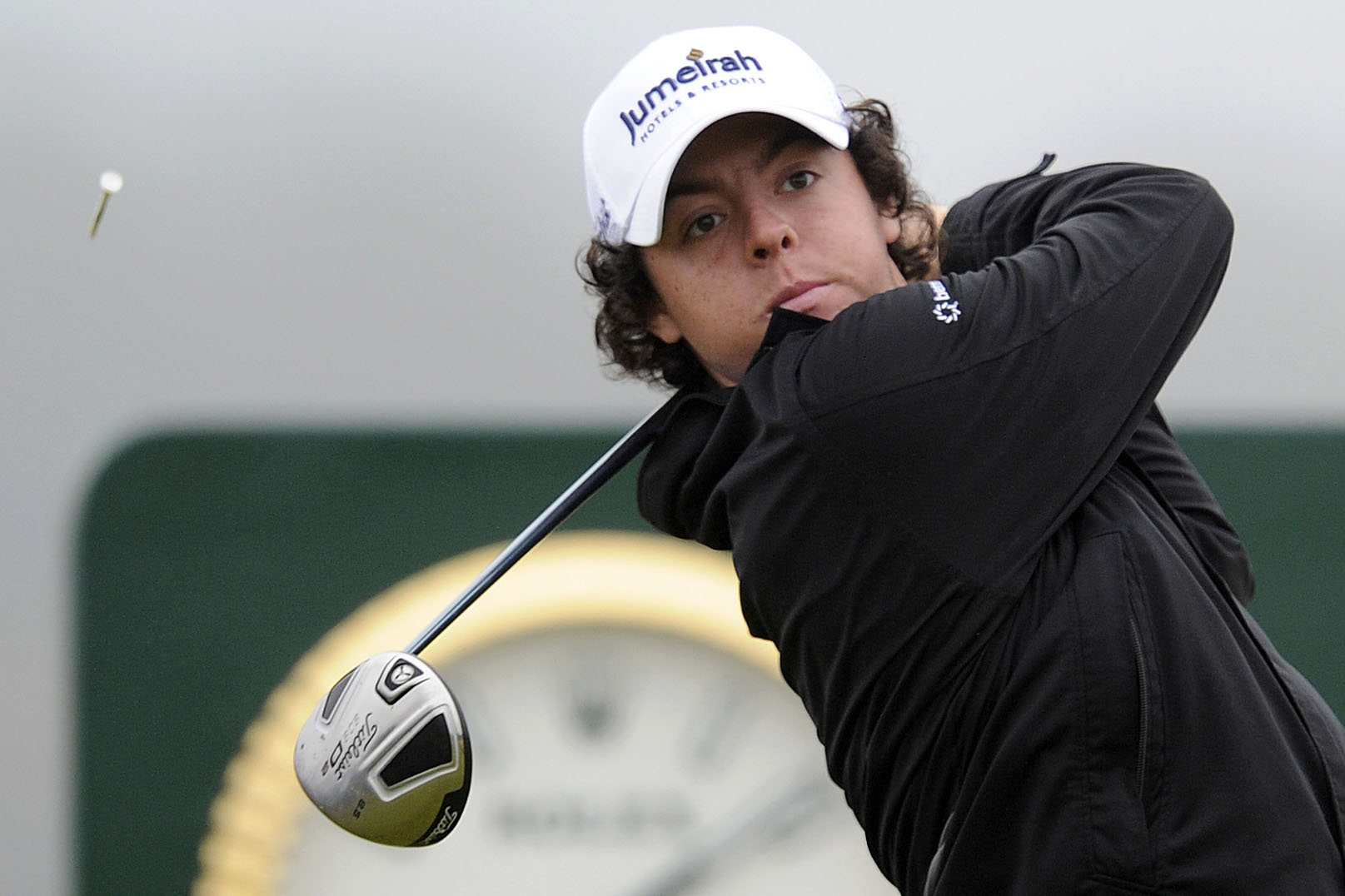 Rory McIlroy fired the lowest first round in British Open history, a nine-under par 63, to seize a two-stroke lead on Thursday and outshine top-ranked Tiger Woods at the famed Old Course.
McIlroy equalled the low round in any major, becoming the 22nd man to fire a major 63, and is only the eighth player in British Open history with a 63, the second at St. Andrews after Englishman Paul Broadhurst in 1990's third round.
Had the 21-year-old from Northern Ireland not missed a five-foot birdie putt at the 17th, the fabled Road Hole that proved day one's hardest challenge, he would have made even more history at the birthplace of golf.
"It sort of went through my mind at the 17th tee that 62 would be the lowest round in a major. Probably why I missed the putt," McIlroy said.
"I don't think I can come off feeling let down. I'm leading the Open Championship."
McIlroy took full advantage of ideal wind-less conditions on the defenseless Old Course early to finish two strokes ahead of South African Louis Oosthuizen as the 150th anniversary Open began.
"Going out there with no wind, you are never going to get St. Andrews playing any easier," McIlroy said. "It gives me a little bit of a buffer out there going into the next three days."
American John Daly, who won the 1995 Open at St. Andrews, was three adrift along with Scotsman Andrew Coltart, England's Steven Tiley, Welshman Bradley Dredge and Sweden's Peter Hanson.
Woods, the 2000 and 2005 Open champion here who seeks his first victory since a sex scandal destroyed his iconic image, was four back after a bogey at 17 and a missed birdie putt at 18.
"Today felt awkward because there was absolutely no wind whatsoever and you never play a links course with no wind," Woods said. "You had to take advantage of it. I felt like I did a pretty good job of that."
Woods shared eighth with fellow Americans Lucas Glover, Nick Watney and Sean O'Hair, England's Lee Westwood, Swede Fredrik Andersson Hed, Spain's Alejandro Canizares, German Marcel Siem and 2009 PGA Championship winner Yang Yong-Eun of South Korea.
Third-ranked Westwood birdied the last five holes on the front nine, answered a bogey at 13 with a birdie at 14 and ended with four pars.
A Road Hole bogey cost Oosthuizen, who had four birdies in a row ending at 10 and birdied 14 and 15 after the wind came up before stumbling at 17 and scrambling for par at 18.
"The first nine holes there were a lot of birdies out there," he said. "Got really windy when we turned on 12. Definitely was a good round."
Afternoon wind boosted scores. World number two Phil Mickelson began with 12 pars, took a double bogey, then fired four pars before closing with a birdie to finish 10 strokes off the pace.
McIlroy shot the first British Open 63 since Nick Faldo and Payne Stewart in the last round at Royal St. George's in 1993 and the first in a major since Woods in round two of the 2007 PGA Championship at Southern Hills.
"This course just suits me," McIlroy said. "It just fits my eye."
Ninth-ranked McIlroy missed the cut at this year's Masters and US Open but silenced any skeptics.
McIlroy eagled the par-4 ninth, began the back nine with three birdies in a row and added a 12-foot birdie at the par-5 14th. He missed the birdie bid at 17 but finished with a four-foot birdie at 18.
"The eagle at nine turned things around," McIlroy said. "I got going from there."
Daly, 44, fired four birdies in a row and set himself up as a people's choice to hoist the Claret Jug as Tom Watson was last year and Greg Norman was in 2008, although both bids failed.
"It would be the most gratifying victory I could ever have," Daly said. "I would appreciate it more than any tournament I've won."