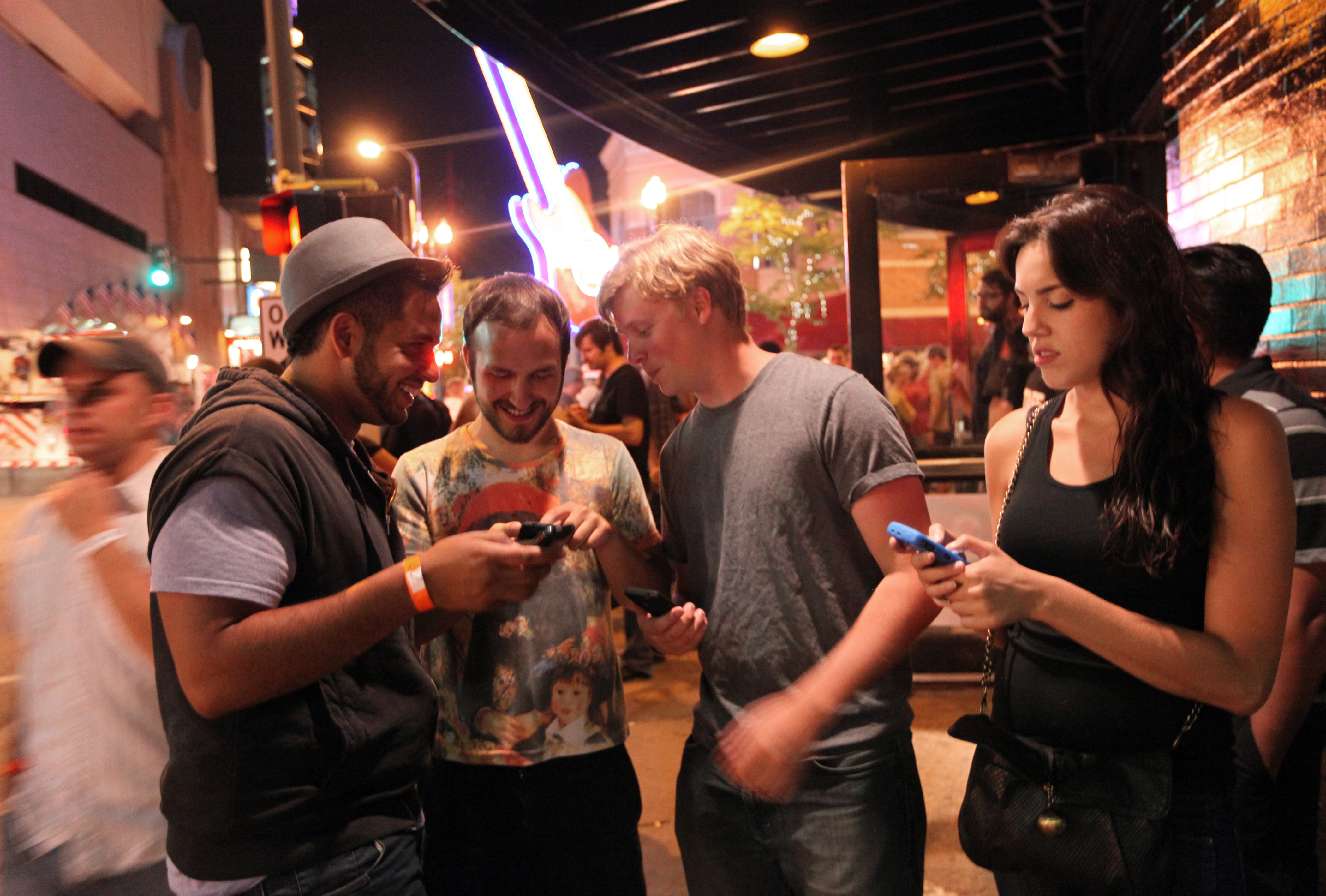 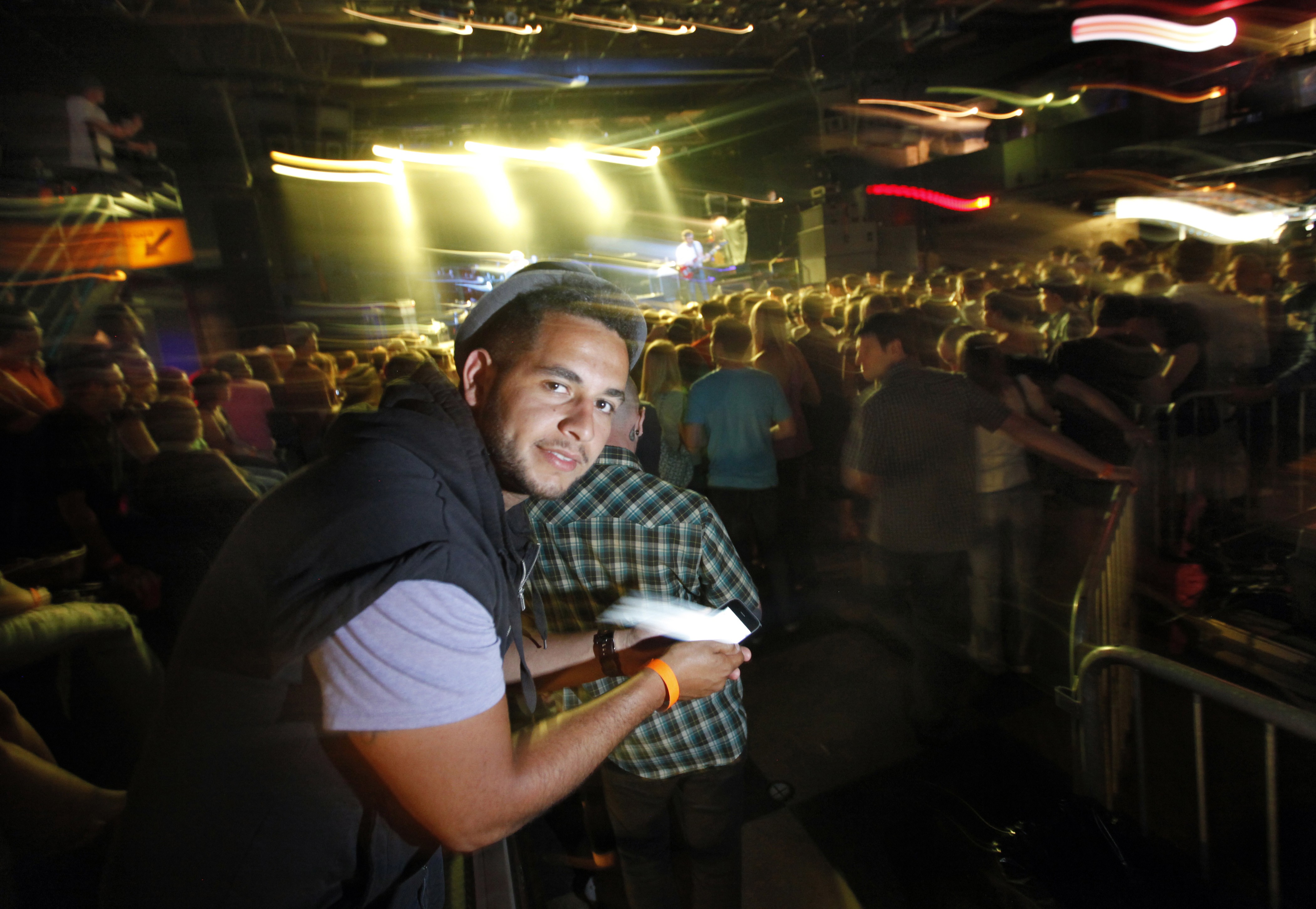 It's 1:00 a.m. Do you know where your Foursquare friends are?
Every night, hundreds if not thousands of diners, concertgoers, sports fans and club kids are using smart phones to punch in their whereabouts on such social media networks as Foursquare and Twitter.
These night owls are using their iPhones and Evos as a different way to see and be seen.
Not only have these mobile networks changed the way people go out, but they're changing the way bars, restaurants and music venues market to consumers, with digital come-ons that include food and drink specials, instant coupons and VIP perks.
Use of mobile devices for such nightlife networking is big, and getting bigger. Twitter, which lets users send short messages called "tweets" to their lists of followers, has 100 million users. Foursquare is a location-based service that has a smaller but rapidly expanding user base of 1.5 million. With its geo-coding capability, Foursquare instantly records "checked-in" users as being at a particular location. Without making a phone call, people can track down their friends for a meet-up - or maybe avoid them entirely.
For fans of these networks, a night without smart phones is unimaginable. Detractors find the whole thing pointless, even narcissistic - does the world really need to know your every move?
On a recent Friday night, Kareem Ahmed, 23, stepped into First Avenue, the downtown Minneapolis rock club, and immediately whipped out his iPhone. He was there to see the electro-rock band Solid Gold. On his phone, Ahmed checked in on the club's Foursquare page and sent out tweets announcing his arrival.
Ahmed has more than 3,000 followers on Twitter. Some he knows, others he does not.
But they read his tweets and he follows their digital musings, too.
"Twitter is the main source of information for anything I do," he said.
Foursquare has been described as a real-life game of Monopoly. Checking in to a specific bar or restaurant is like staking your claim. If you have the most check-ins at a given place, Foursquare will recognize you as that establishment's "mayor." Foursquare also distributes digital badges to users who complete different tasks, such as visiting multiple places in one night.
"I think people get a little carried away," Ahmed said. "I don't care if you're 'mayor' of a gas station."
When Solid Gold hit the stage at midnight, Ahmed's nose was again buried in the soft glow of his phone's touchscreen. He snapped a photo of the band with his camera phone and sent a "Twitpic" to his Twitter followers.
Ahmed, who works in online marketing for McNally Smith College of Music in St. Paul, is an early adopter. He joined Twitter in 2007, shortly after its launch. He was impressed by the way it could connect people (even though some still view "social media" as an oxymoron). In 2008, Ahmed started promoting his own Tweetups - meet-ups among his Twitter acquaintances, usually held at a bar.
One particular Tweetup, held at the Bulldog N.E. bar last November, has become famous in the local Twitterverse. On a whim that day, Ahmed sent a personal tweet inviting Mark Cuban, the billionaire owner of the NBA's Dallas Mavericks and a prominent social media advocate, to join the gathering.
Cuban's team was in town to play the Timberwolves.
To Ahmed's surprise, Cuban showed up.
"He walked in the door and said, 'Hey, are you @Kareemy?'" Ahmed said, referring to his online handle. "It was pretty cool. Where else can you ask a billionaire to show up at an event and he shows up?"
Kyle Matteson (@solace), 32, is a voracious concertgoer, attending up to a dozen shows a month. He tweets about all of them (and the Twins, too). He's tweeted almost 15,000 times since 2007, a total twice that of Twitter's founder, Jack Dorsey.
In the Twin Cities, Matteson's Twitter feed is known as a trusted source for music news even though he isn't a traditional journalist.
(He's an IT professional for the University of Minnesota.) He calls himself "an active outsider." In April, he named the headliners for this weekend's Basilica Block Party before the event could post anything itself.
"I don't really care about breaking the news," Matteson said. "I'm just excited that the band is coming - like I'm shouting it to the rooftops."
If you know which venues and bands to follow, Twitter can be a one-stop shop. It's often the first place to find ticket alerts, ticket give-aways and set times.
First Avenue was one of the first clubs to take advantage of Twitter in the Twin Cities.
Before most shows, the club will tweet a trivia question. The first person to tweet back with the correct answer gets a ticket upgrade, good for a table on the second level.
(For the Solid Gold show, the question was "What baseball favorite did @solidgoldband recently cover, at the request of the Twins?" The answer: "Take Me Out to the Ballgame.")
The only catch: You have to be in the club to win.