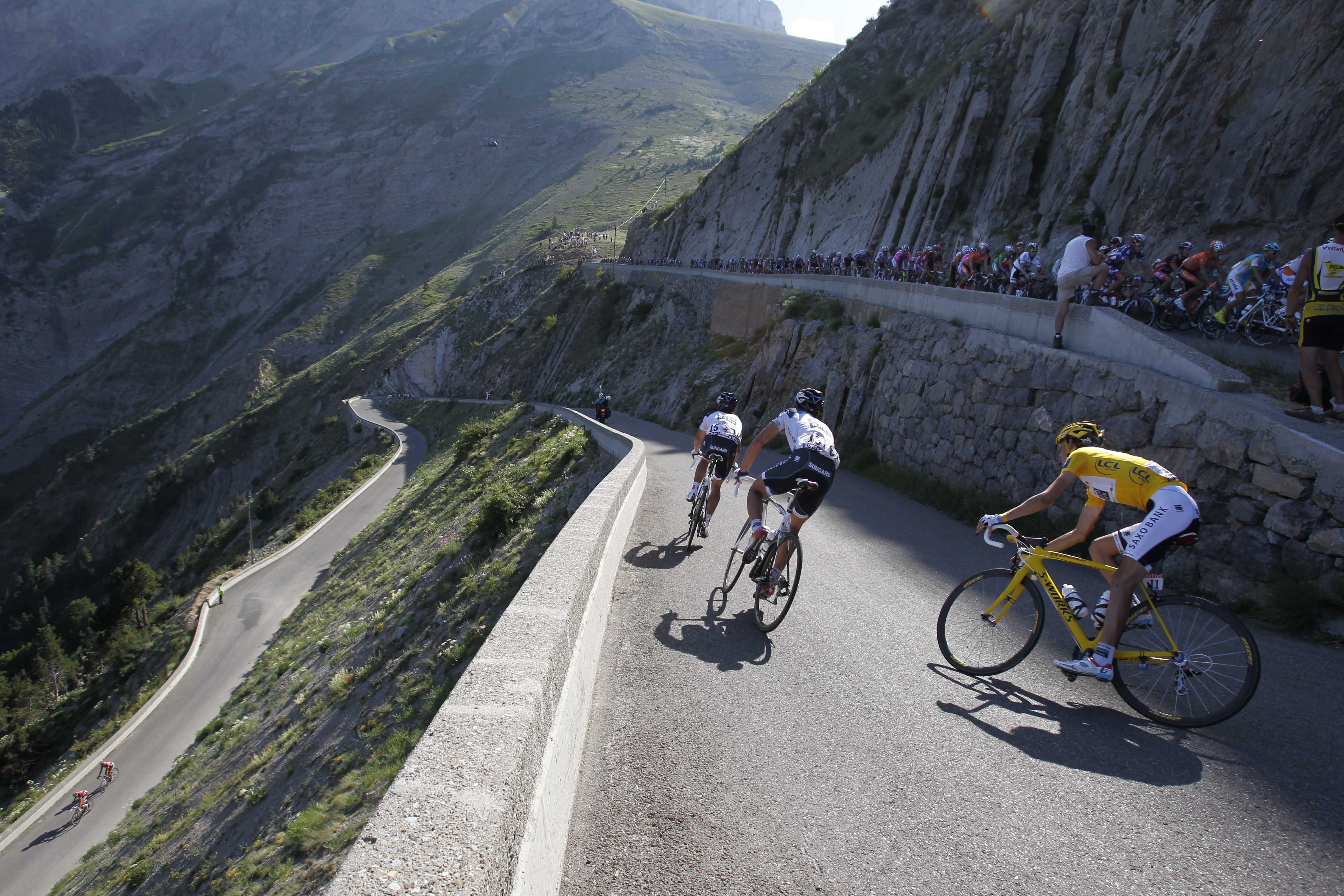 Andy Schleck of Luxembourg kept hold of the Tour de France race leader's yellow jersey little difficulty on a day when the main contenders were happy to sit back and let others do the suffering.
After several days of brutal racing and crashes in searing heat combined to knock both seven-time Lance Armstrong and two-time Tour runner-up Cadel Evans out of contention for the title, Wednesday's 10th stage was never going to be contested by the likes of Schleck or defending champion Alberto Contador.
Instead, the day after a mammoth stage trying to outwit each other in the high Alps, Contador and Schleck stayed safely in the main pack on another scorching hot day over the 179km (111.2-mile) trek from Chambery to Gap. It featured only one difficult climb - the Laffrey pass.
"We were happy to let the breakaway go. That allowed us to ride at an easy pace for most of the day," said Schleck, who leads the two-time winner Contador by 41 seconds overall. "It was very, very hot and I think most of the guys are still feeling the effects of (Tuesday's) stage."
They rolled in more than 14 minutes behind stage winner Sergio Paulinho - Armstrong's RadioShack teammate.
"He's a very strong rider and never thinks about himself. I'm very happy to see him win a stage in the Tour de France and shine for himself," Paulinho's manager Johan Bruyneel said.
The top 3 did not change, with Samuel Sanchez of Spain still 2:45 behind Schleck.
But Armstrong lost more time and is over 17 minutes adrift, although the 38-year-old conceded that his Tour bid was over after he was affected by three crashes on Sunday's chaotic first stage in the Alps.
Easing up in the saddle offered the likes of Schleck and Contador a chance to take in some mesmerizing scenery, as glistening sky-blue lakes cut a path through the dark green hills and steep climbs of the southern Alps.
Paulinho edged Vasil Kiryienka of Belarus in a sprint to the line after four riders had formed an early breakaway, and then two more joined them while the others just dropped off and saved energy.
No one was going to argue that call.
Paulinho, meanwhile, had just about enough energy left to sprint.
"I've been dreaming of this since I was a little child," Paulinho, who won silver at the 2004 Olympics in the road race, said after his first Tour stage win - and RadioShack's first of this race.
"I'm sure we're going to celebrate this win because it's the first for us," he added.
The 25-year-old Schleck knows he will need all the energy he can get as he tries to take the title from his Spanish opponent Contador.
He hopes his teammates will get the message that they need to give everything that have for him against Contador's Astana teammates.
"My team is here to work," Schleck said. "I have a fairly complete team and I don't see any real weaknesses ... Perhaps our team doesn't have as many climbers as Astana but that doesn't really matter."
Schleck, however, still seems intent on trying out mind games on the 27-year-old Contador, who has yet to respond and is merely focusing on getting a third Tour title with machinelike efficiency.
"I have already said that the situation is straightforward, the team only has one rider to look for (Contador)," Schleck said. "With what happened in the last few stages, I know that I am climbing better than all the others."