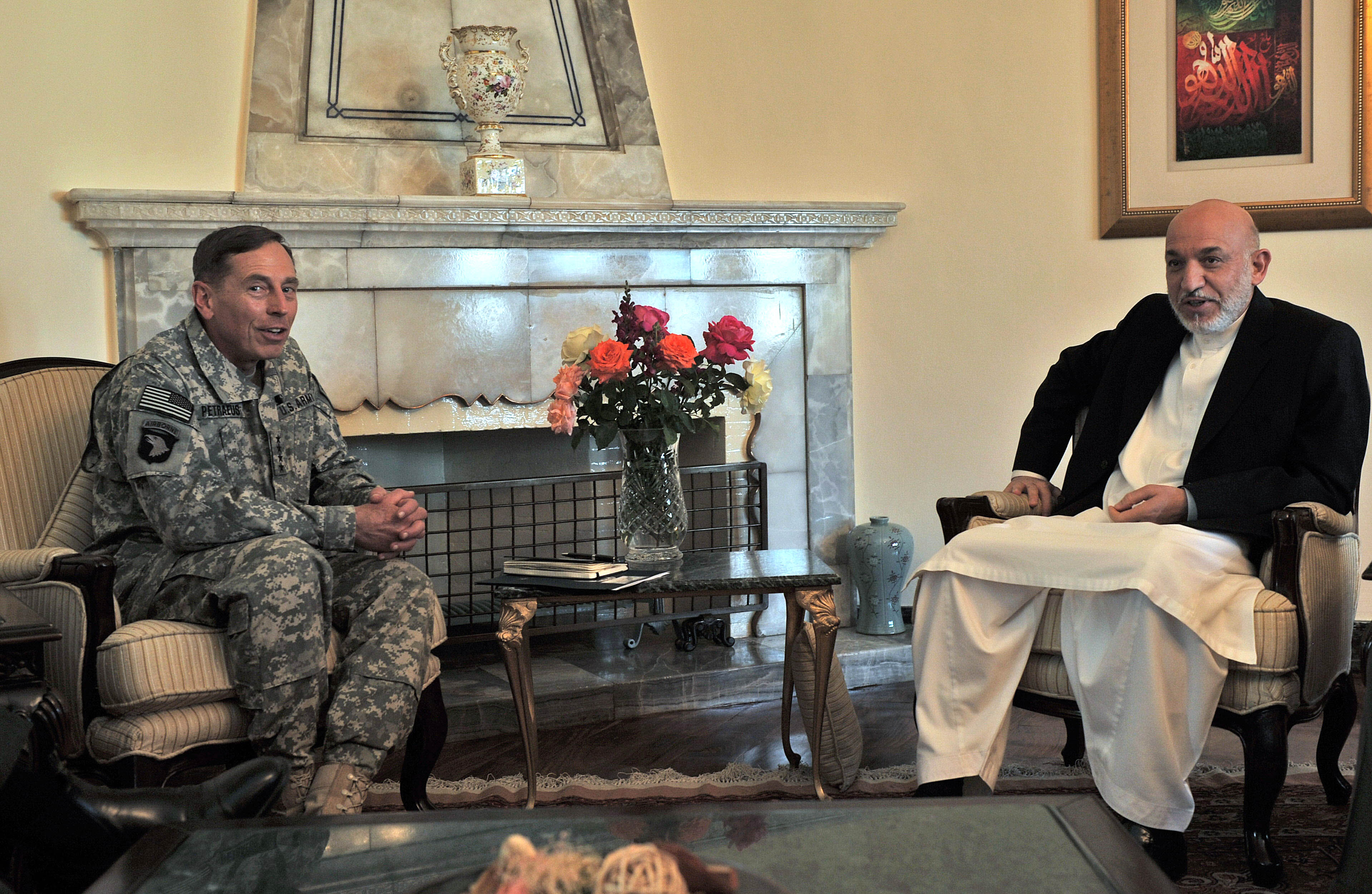 Afghan President Hamid Karzai and his national security team endorsed a U.S.-backed plan to set up local police forces around the country, allowing villagers to protect themselves in areas where international and Afghan forces can't be spared.
The new Local Police Force initiative will be overseen by the Afghan government. That was a key demand of Karzai who fears that simply arming villagers without government oversight would essentially create local militias that could undermine his administration and possibly fuel a new civil war.
Karzai's office offered no details about the plan, other than a statement released Wednesday evening saying the Local Police Force would be under the direct supervision of the Interior Ministry.
Pentagon spokesman Geoff Morrell said the plan was designed to fill the gaps in security in remote areas and empower opponents of Taliban domination to fight back - while also providing jobs.
"This is about putting locals to work, so that they can be on watch in their communities, for people who shouldn't be there, and then work with the established security organizations - the army, the police, the coalition - to make sure (insurgents) don't menace their communities," Morrell told reporters Wednesday in Washington.
He stressed the local defense forces would not be militias, but "government-formed, government-paid, government-uniformed local police units who would keep any eye out for bad guys."
NATO officials declined to publicly comment on the program, even though NATO Commander Gen. David Petraeus has been intimately involved in discussions about it in recent days at the presidential palace. However, a coalition official, who spoke on condition of anonymity, confirmed U.S. backing for the plan.
"The challenge we've got is that we've got a huge area," British Maj. Gen. Nick Carter, a NATO commander of troops in southern Afghanistan, said earlier this week. "We've got a large quantity of population and we can't be everywhere. And what the village stability operations allow us is the opportunity to give the Afghans the courage to take protection into their own hands so we don't have to put conventional forces there."
Carter said local police forces have to be set up cautiously.
"What you don't want to do is disconnect those population centers from the government," Carter said. "What we're trying to do throughout everything we do in this campaign is connect the government to the population."
There have been several local defense initiatives tried around the country, now, the statement said, these forces would be swept into the Local Police Force.
The local policing plan in Afghanistan is somewhat akin to the Awakening Councils in Iraq where Petraeus, the former top commander in Iraq, reached out to Sunni sheiks - a move credited for helping oust militants from key areas and sharply decreasing attacks.
In Afghanistan, however, there are fears local police forces will fall under the control of local warlords. Critics question the wisdom of handing out weapons to Afghans in the middle of a war. And they fear the plan could stoke rivalries between ethnic groups in a country that has been in conflict for 30 years.
Earlier reports hinted at friction between Karzai and Petraeus over the issue, although the coalition denounced the reports as being untrue. "There is no rift," NATO spokesman Josef Blotz said Sunday when the meetings were ongoing.
A military source in Kabul, who spoke on condition of anonymity because he was not authorized to share information about NATO's discussions with the government, said Karzai and Petraeus had been "forthright" with each other about their concerns over certain aspects of the local defense initiative.
At Karzai's request, advisers for both the president and the commander met to discuss ways to address "very understandable issues" associated with local security initiatives, the source said. NATO officials have been working with the ministers for the past week to resolve the issues, he said.
The NATO official said not all the Afghan officials back the idea for Local Police Forces. He said the past few days of discussions have been about building consensus on how the program would work since the main strategy of both the Afghan government and the international community continues to be the buildup of more formal Afghan army and police forces.
In the end, the Local Police Force emerged as the best way to help secure areas where community policing makes sense, he said. The local police would be equipped and trained to defend their areas, not go on the offensive against the Taliban, but rather work deterring threats, maintaining order and reporting unlawful activity to the government.
Local police forces will likely be seen only in communities around the country where it is needed, he said. Using the Afghan National Police remains the preferred solution to providing security, but where that's not possible, the local police forces will be a "bridge solution" until they can be merged into the Afghan national security forces, he said.
Deb Riechmann is an Associated Press writer.