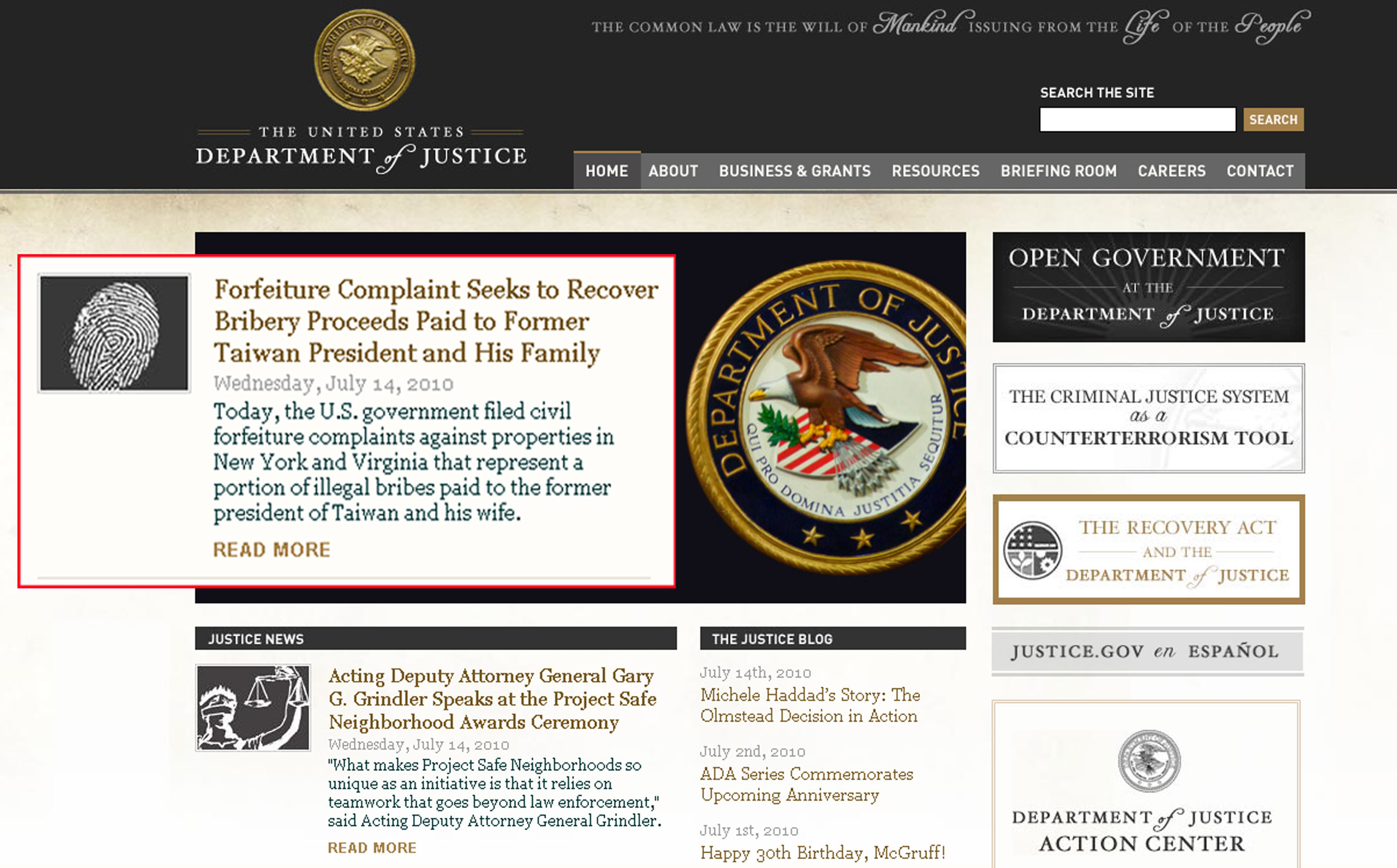 The U.S. should wait until the final verdict in former President Chen Shui-bian's cases before making moves to expropriate his properties in New York and Virginia, his son said yesterday.
The U.S. Department of Justice filed complaints Wednesday seeking to expropriate a condominium in Manhattan and a house in Keswick, Virginia, which Chen and his wife Wu Shu-jen allegedly bought with bribe money, reports said.
The U.S. document said Yuanta Securities Co. paid a bribe of NT$200 million (US$6.2 million) to Wu in 2005 and 2006 in order to obtain Chen's non-interference in its bid to take control of Fuhwa Financial Holding.
The former president's son, Chen Chih-chung, condemned the U.S. move as illogical and premature in statements to Taiwanese reporters yesterday. He pointed out that the Taipei District Court was still dealing with the allegations in the Yuanta case, which formed part of the former Chen administration's second round of financial reforms.
"The U.S. cannot judge the legality of the funds before the Taiwanese court has reached a verdict," Chen said.
He added that the U.S. had apparently based its rationale on the indictments issued by Taiwan's prosecutors instead of waiting for the court's final ruling. He added that the former First Family was willing to hand necessary documents to an eventual U.S. court session, but held out little hope of any member attending.
Chen Chih-chung said the U.S. government had no legal basis to decide the money used to buy the real estate was illegal. He said the funds originated with political donations for his father and were invested in the property through a bank and a private company.
The U.S. was reportedly willing to return part of the funds eventually recovered to Taiwan. The Presidential Office was not willing to comment on the issue, while the Ministry of Foreign Affairs said it respected the judicial system.
The former president is also appealing earlier sentences for corruption and money laundering with the Supreme Court.
The Taipei District Court found him guilty of corruption and money laundering last September 11 and sentenced him to life in prison.\ On June 11, the Taiwan High Court cut the prison term to 20 years. The former president has been in custody at the Taipei Detention Center as a suspect since December 30, 2008.
His son visited him there yesterday. The former president also reportedly rejected media claims that he was preparing to form a new political party. The reports came after the opposition Democratic Progressive Party toughened its rules against election candidates forming or joining cross-party alliances.
Chen Chih-chung is running as an independent candidate for a seat in the Kaohsiung Council in elections scheduled for Nov. 27.
Several DPP members have campaigned with him or joined the "One Side, One Country Front" linked with his father. The former president denied that the group was a new faction or alliance.