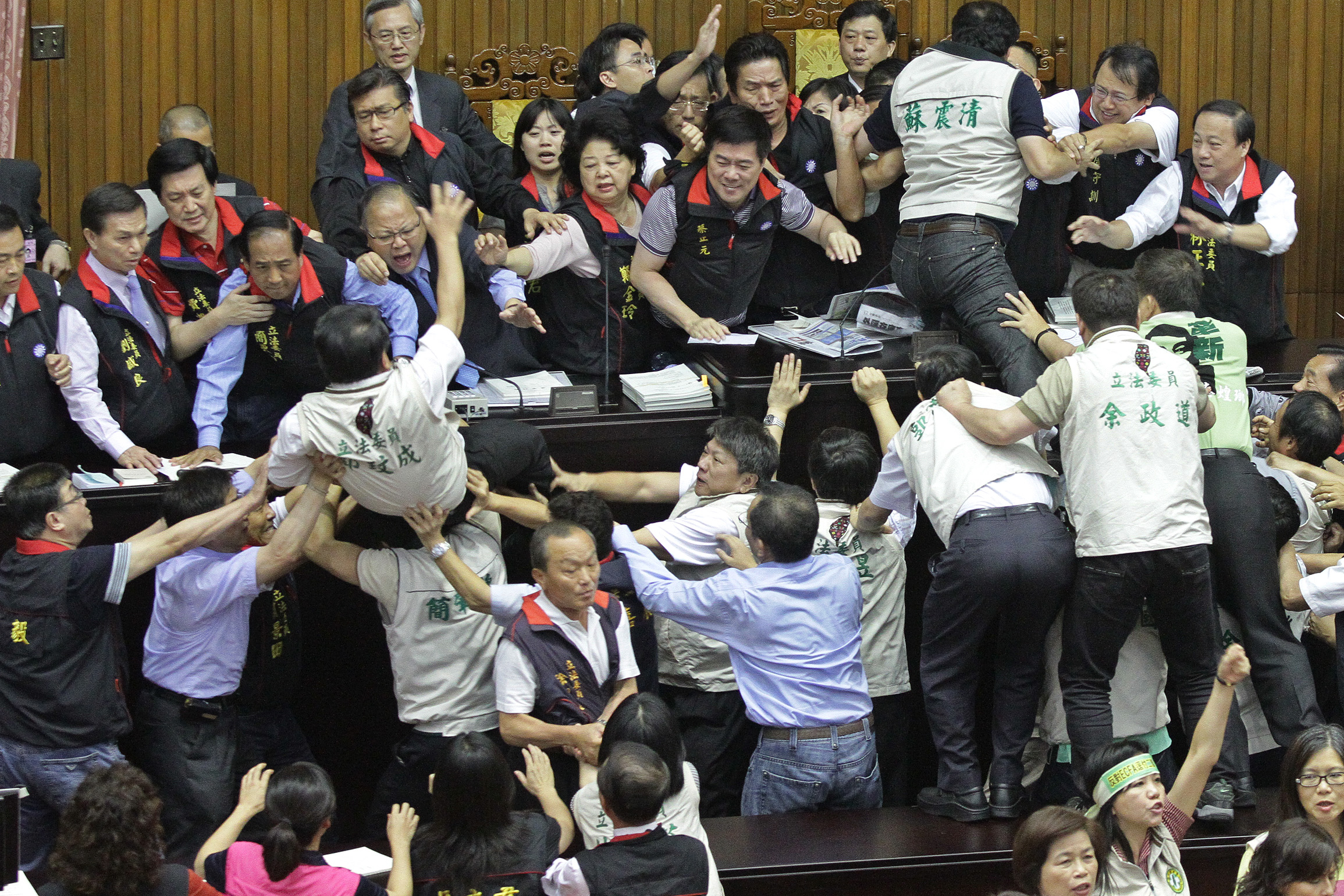 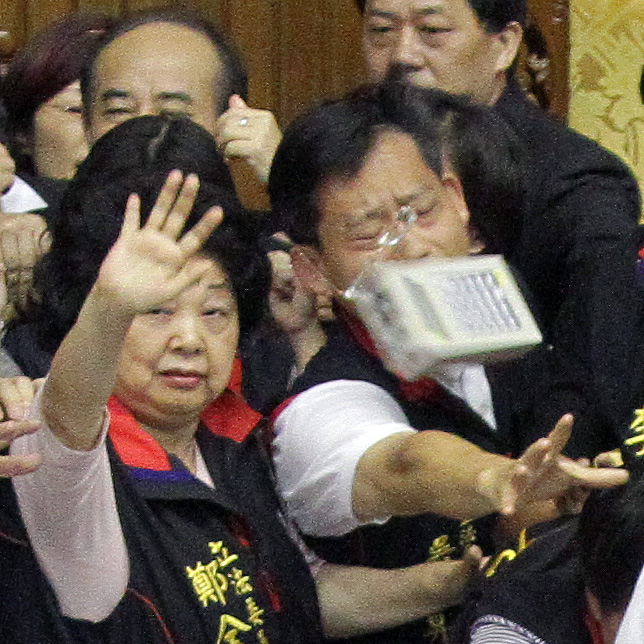 Lawmakers began their review of the Economic Cooperation Framework Agreement with China amid clashes yesterday after failing to reach a consensus on the process.
The opposition Democratic Progressive Party insisted on article-by-article reviews and votes, while the ruling Kuomintang only wanted one vote on the whole package at the end of the screening process. Days of negotiation failed to end in an agreement.
During an informal discussion in the morning, the KMT used its majority at the Legislature to push through its timetable, while DPP proposals to first establish regulations about agreements with China as well as a special review committee were rejected.
As a result, the special session is scheduled to last from yesterday afternoon until next Wednesday. As soon as lawmakers gathered to start the review, Legislative Speaker Wang Jin-pyng announced ECFA was moving on to a second reading. Scuffles immediately broke out between the KMT lawmakers crowding around Wang and the DPP legislators below trying to climb up to voice their protest against his announcement.
For about six minutes, lawmakers threw papers, water and even a trash can at each other. Cable television showed footage of KMT legislator Wu Yu-sheng pressing a handkerchief against the right side of his head after he was hit by a projectile, reportedly a clock. An ambulance drove him to nearby National Taiwan University Hospital where he received eight stitches, reports said.
DPP lawmaker Kuo Wen-chen climbed on to the main dais and was pushed off. He went away for medical treatment after feeling pain, but no fractures were found. He told reporters he would seek to be transferred to a hospital in Kaohsiung. Wang and Premier Wu Den-yih later visited the two lawmakers in hospital.
Wang later announced the end of the activities for the day and a resumption of the session this morning. The DPP said yesterday's proceedings had shown grave mistakes, so it would boycott the rest of the special session unless Wang made corrections.
"So many people were standing there, shouting and raising their hands, that saying you did not see them is fake," DPP legislator Chai Trong-rong told reporters.
The original plan for the session also included a briefing by Premier Wu Den-yih followed by a question-and-answer session, but KMT lawmakers threw doubt on the possibility yesterday by saying it made no sense for him to appear if there was conflict between the parties.
The DPP caucus said it was the duty of its members to point out the negative consequences of ECFA. Maybe it was not necessary to reject every element of the agreement, but therefore the relevant legislative committees should have the opportunity of reviewing its clause, the party said.
DPP caucus whip Lee Chun-yee said the ruling party did not want to submit each ECFA clause to a vote because later on there would be more cross-straits agreements, maybe even about political issues.
The KMT wanted the future cross-straits economic cooperation committee, which will be established according to ECFA, to handle even more, Lee said.
DPP Chairwoman Tsai Ing-wen said President Ma Ying-jeou was interfering with the rights of the legislative branch and harming the constitutional and democratic order. Ma had failed to give the public, the opposition and even the lawmakers of his own KMT a fair chance to screen ECFA, she said.
The KMT also listed other legislative proposals for discussion during the special session, including a disaster prevention act and measures related to national health insurance reform, civil service retirement pensions and farming villages.