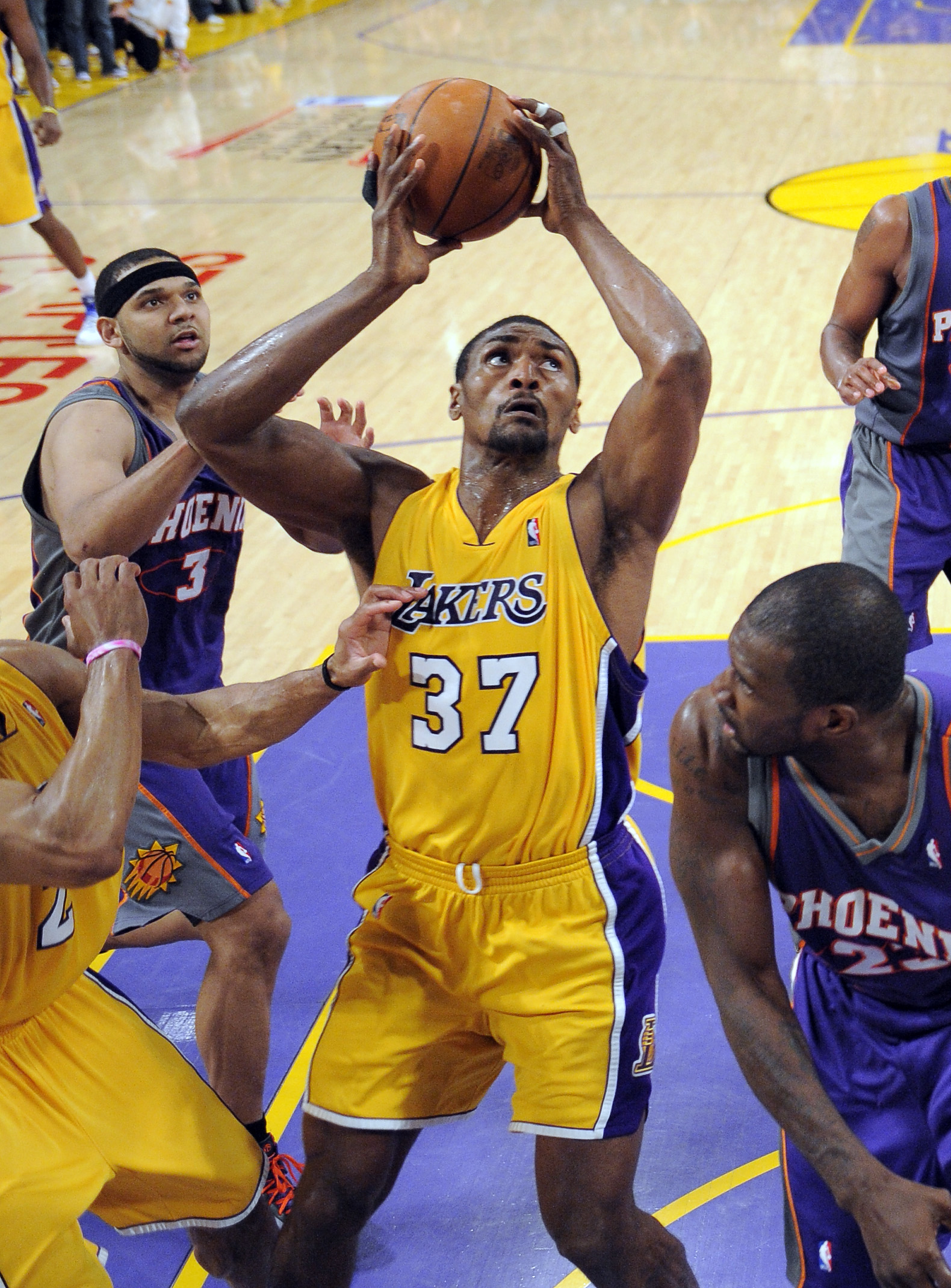 Ron Artest instantly became a part of Los Angeles Lakers' folklore with a buzzer-beating shot that snatched a 103-101 win over the Phoenix Suns on Thursday, and a 3-2 lead in the NBA Western Conference finals.
Artest rambled into the lane and just got in a wild shot after rebounding Kobe Bryant's miss.
Bryant had 30 points, 11 rebounds and nine assists for the Lakers, but Artest was the improbable hero of Game 5 with just his second basket of the night in an otherwise awful performance.
Jason Richardson sank a 3-pointer with 3.5 seconds left to tie it for the Suns, who rallied from an 18-point deficit in the second half.
Bryant missed a difficult shot from the corner, but Artest collected the rebound and raised to his tiptoes to throw up a shot that somehow went in. Artest, who missed two open jumpers just a few seconds earlier, grabbed Bryant in a joyous bear hug while the Staples Center crowd erupted.
Game 6 is Saturday in Phoenix, where the Lakers can clinch the chance to play for their 16th championship. "It's going to be tough but we're looking forward to it though," Bryant said.
Steve Nash had 29 points and 11 assists in a stirring second-half effort for the Suns, who hacked away at Los Angeles' lead throughout the fourth quarter. Phoenix trimmed its deficit to 95-94 when Nash converted a three-point play and then fed Amare Stoudemire for a layup that barely beat the shot clock with 2:52 left.
The Lakers led 101-96 with 1:38 remaining, but Nash hit another jumper and Artest missed twice. The Suns had three looks at a 3-point shot in the final seconds, but two missed before Richardson missed so badly that he banked it in from a long step behind the line.
Derek Fisher scored 22 points and Pau Gasol had 21 points and nine rebounds for the Lakers, who rebounded from consecutive losses in Phoenix with their best defensive performance of the series, forcing 15 turnovers and holding Phoenix to mediocre shooting - yet the Suns came agonizingly close to handing Los Angeles its first home loss of the postseason.
The Lakers improved to 8-0 at Staples Center, where they'll play Game 7 on Monday if the Suns hold serve in a series featuring five wins for the home team.