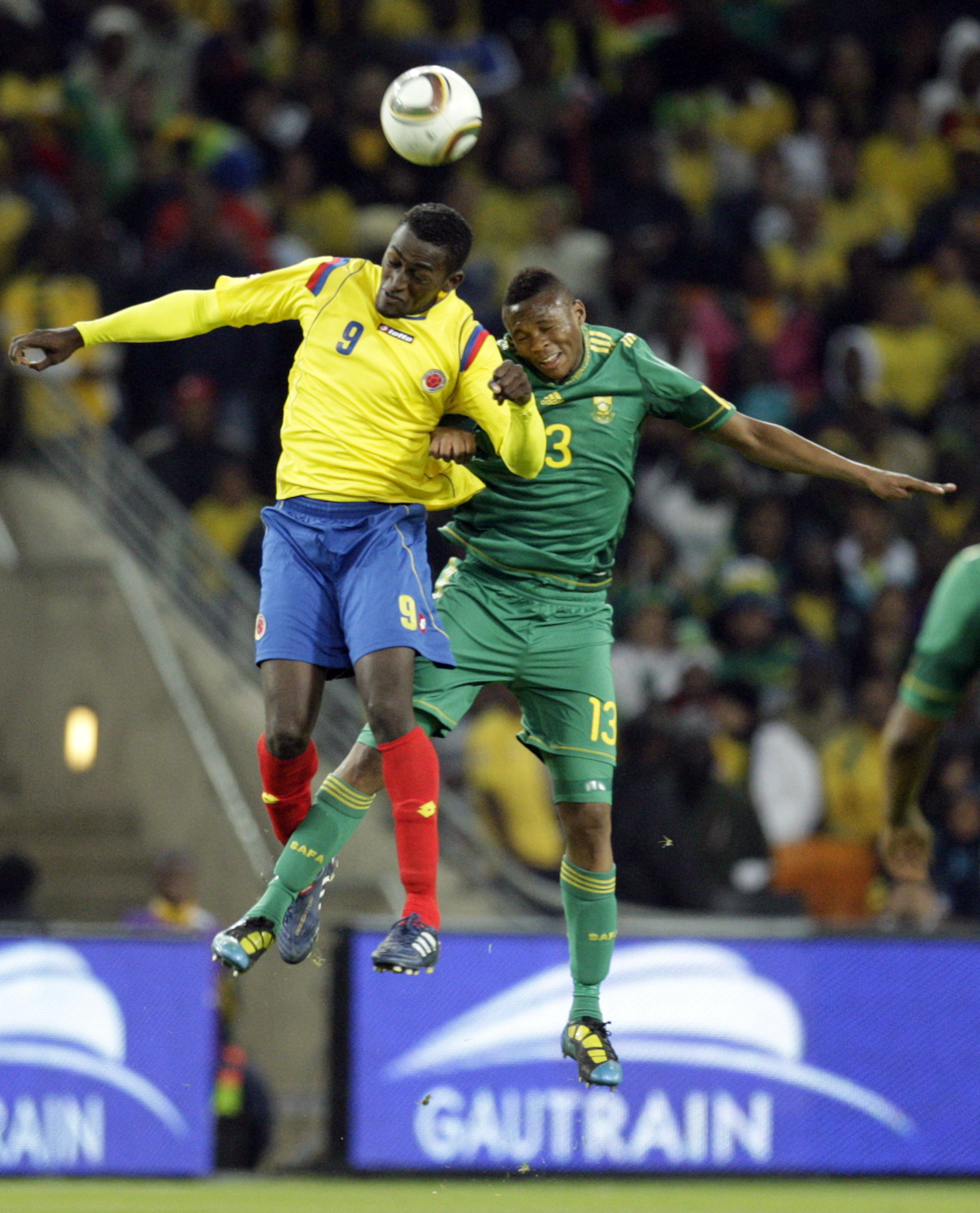 South Africa extended an unbeaten run to nine games since Carlos Alberto Parreira returned as coach last November with a 2-1 victory over Colombia on Thursday in a tense World Cup warm-up.
The host nation played better football when drawing with Bulgaria three days ago, but the sell-out 75,000 crowd at Soccer City did not care as they celebrated a winning Bafana Bafana (The Boys) debut at the rebuilt stadium.
All the goals came from penalties with midfielder Teko Modise and striker Katlego Mphela the South African scorers and Giovanni Moreno converting his kick for non-qualifers Colombia.
Parreira introduced West Ham striker Benni McCarthy, under fire from the domestic media who claim he is overweight, midway through the second half but he did not get a chance to add to his record 32-goal international haul.
"We fought and we got the result we wanted against experienced opponents with many Europe-based players. Some of my team were nervous toward the end," said Brazilian Parreira.
New Colombia coach Hernan Gomez showered praise on South Africa: "They are a really great team who have a highly respected coach. It was a really tough, competitive match."
A first half lacking rhythm finished 1-1 with Modise converting his penalty at the second attempt on 18 minutes and Giovanni Moreno levelling from another spot kick three minutes later.
But South Africa were lucky to be level as Colombia opened yawning gaps at times in a defense struggling despite the presence of foreign-based Aaron Mokoena and Tsepo Masilela.
It was the first time since Parreira had his entire squad on call that he did not start with an all-local line-up and the side were unimpressive despite passionate backing on a dry, cool night.
The penalty that put Bafana ahead was controversial with the Kenyan match official claiming goalkeeper David Ospina moved forward before saving a weak effort from Modise.
Big-screen replays suggested that ordering a retake was harsh, but calm Modise made no mistake at the second attempt, sending the France-based custodian the wrong way.
Colombia, who have failed to qualify for three consecutive World Cup tournaments since 1998, won their penalty when goalkeeper Itumeleng Khune, injured in an early collision with Jackson Martinez, fouled Adrian Ramos.
This time there was no need to watch the big screen as Moreno stepped up to fire the ball into the corner of the net and the visitors had deservedly restored equality.
Masilela rescued South Africa in the first minute of stoppage time by blocking a shot from Martinez as Colombia looked more dangerous than the first African country to stage the World Cup when pressing forward.
Parreira changed goalkeepers for the second half with Moeneeb Josephs coming on and both central midfielders were also replaced with Kagisho Dikgacoi and Everton Player of the Season Steven Pienaar entering the fray.
Yet another penalty, awarded for a foul on Siphiwe Tshabalala by Jhon Valencia, put South Africa ahead again on 58 minutes as previously quiet Katlego Mphela sent Ospina the wrong way.
Guatemala are next up for South Africa on May 31 in the northern city of Polokwane followed by a final warm-up against fellow World Cup qualifiers Denmark - 2-0 winners over Senegal on Thursday in Denmark - on June 5 near Pretoria.