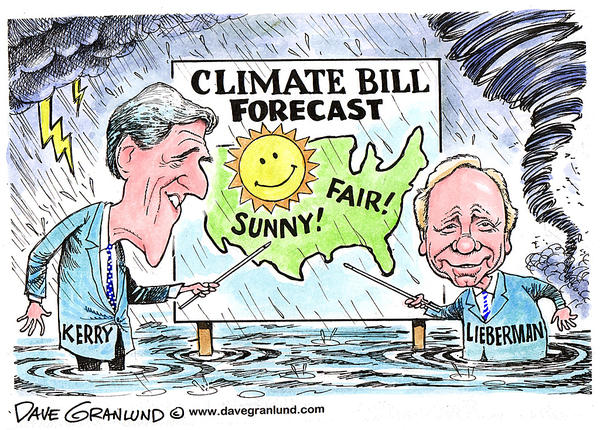 President Obama and his administration currently face two pollution problems - a physical one in the Gulf of Mexico, where oil continues to spew unchecked from a damaged well, and a political one involving immigration policy and originating in Arizona.
In both instances an exaggerated deference to process bordering on passivity risks creating an impression that the White House is running behind critical domestic events and, worse, detached - even indifferent - to the human toll of inaction.
With regard to the gulf oil well blowout, it's true that Obama inherited from previous administrations a vestigial regulatory system and an utter lack of contingency planning for such an emergency. It's also true that the federal government has to rely on the oil industry for technical expertise in these cases. At the same time, the White House has been exceptionally slow about demonstrating that it's using its legal authority to effectively monitor the pace and intensity of that technology's application. Occasional outbursts of tough talk in the Cabinet have been contradicted by Coast Guard officials, who insist British Petroleum is doing all it can.
Maybe, but there's a kind of slow-motion Hurricane Katrina washing up on the gulf shoreline, and the White House needs to show that it's actively assisting state officials on the ground and that it's already preparing to ameliorate the terrible environmental and economic losses that are about to pile up. Lt. Gen. Russel L. Honore, who directed the most effective post-Katrina relief efforts, has suggested declaring a national disaster in the area and using the authority that comes with such a declaration to start hitting BP with daily fines. The money, he suggests, should go into a trust fund to pay compensation to those injured.
Inaction on this front risks further public disenchantment; two weeks ago, polls showed that only a third disapproved of the administration's approach to the gulf spill; this week, more than half did. If Wednesday's effort by BP to cap the well fails and the company has to fall back on drilling relief wells, we could be looking at something worse than the 1979 explosion and blowout in Mexico's Bay of Campeche, which took nine months to halt with that technique.
In Arizona, meanwhile, the consequences of the president's failure to push for comprehensive immigration reform, as he promised in his campaign, have been compounded by the Justice Department's sloth in challenging that state's recently enacted anti-immigrant legislation. Arizona's SB 1070 requires the state's law enforcement officers, when in the course of their lawful duties, to demand that anyone they suspect of being in the country illegally immediately present proof of their legal residency. It makes it a crime for immigrants not to carry their papers, and it cannot - no matter what its backers insist - be enforced without impermissible ethnic profiling of all Latinos.
Obama has instructed the departments of Justice and Homeland Security to undertake a review of the statute with an eye toward a court challenge. Given the fact that federal pre-emption of immigration regulations is an established legal principle and that the statute runs only 10 pages, how long can that take? Last week, Attorney General Eric H. Holder Jr. admitted to a congressional committee that he still hadn't read SB 1070.
As a consequence, Arizona's legislative jihad against immigrants continues apace. The state has banned ethnic studies from its secondary schools and, now, state Sen. Russell Pearce, SB 1070's author, says he'll push to deny U.S. citizenship to children born in Arizona to immigrant parents without papers. That's just one more insult to the Constitution. After all, the language of the 14th Amendment is explicit: "All persons born or naturalized in the United States, and subject to the jurisdiction thereof, are citizens of the United States and of the state wherein they reside."
Repeal of its guarantee of what anti-immigrant groups call "birthright citizenship" has long been a kind of Holy Grail in that movement. More than 90 members of Congress currently are on record in support of its abolition. If the White House doesn't step in soon to reassert federal jurisdiction over immigration in Arizona, this latest discriminatory measure is bound to spread to other states. At least 17 other legislatures already are considering versions of SB 1070.
Where does continued inaction by Washington lead? Last month, Rep. Duncan Hunter, R-Calif., told a "tea party" rally in California that the children of undocumented immigrants ought to be deported, even if they're U.S. citizens. "We're not being mean," he said. "We're just saying it takes more than walking across the border to become an American citizen. It's what's in our souls."
If the Obama administration continues to sit on its hands while this sort of ugly nonsense spreads, it will have permitted the pollution of something far more important than a beach.